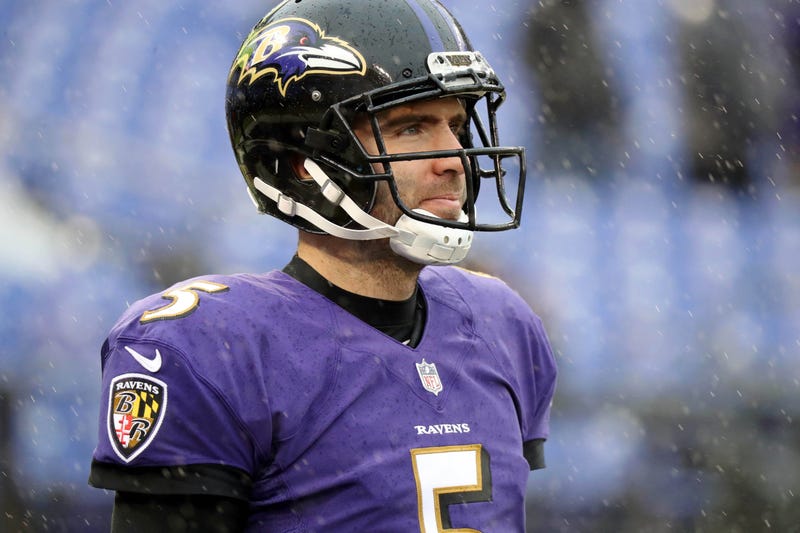 Reports that Joe Flacco was the Redskins' top choice in their quarterback pursuit this offseason are overblown, Craig Hoffman said Friday on 106.7 The Fan.

"There was interest in Joe Flacco in that he is a professional quarterback. That’s about it," Hoffman said. "The idea that the Redskins were pursuing Flacco..."

Hoffman turned to a report from Darren McKee out of Denver, indicating the Broncos moved on Flacco when they did because of the Redskins' interest. Denver ended up with Flacco, sending a fourth-round pick to Baltimore.

.@TroyRenck: "I wasn't aware of the team. I was told certainly another team was in it and that accelerated everything."@dmac1043: "I was told today specifically it was the Redskins."

"I can't categorically tell you that is false," Hoffman said. "But if it is true, it would be surprising to a lot of people in that organization who would know about such a thing. Is it possible that Bruce Allen or Eric Schaffer went rogue and was ready to, or Doug Williams was like ready to go, 'Hey, let me just call the other guys real quick and then we'll get it done.' I guess. But I don't think that was the case."

This isn't to mention that a trade for Flacco, between what the Redskins would owe him, Alex Smith and Colt McCoy, would bring their cap allotment at the position somewhere in the area of $50 million in 2019.

"Unless Bruce was on the phone with John Elway, or ready to make a deal for Joe Flacco without consulting anybody, I don't think the Redskins were close to Joe Flacco at all," Hoffman said. "And the reason is simple: they can't. They have a lot of needs. And there are a lot of people in that building.

"As much as they can pull the 'we're close' card, and everyone likes to clown on Bruce for the 'we're close' card, and, yes, they went 7-9 in a year with a ridiculous amount of injuries. And in a way, yeah, they are kind of close to a playoff spot, because if they stay healthy, they probably make the playoffs last year. Are they close to a long-term success of winning a championship? No."

Hoffman went on to describe the Redskins' plan at QB this offseason as non-existent: "The thing that I can say with the absolute most confidence is they do not have a definitive plan moving forward, because they can't."

"It is impossible for them to know who their starting quarterback is going to be in 2019 right now," he said. "Alex Smith, they have not given up hope, but they are very realistic inside the building internally. Even if they are being super supportive of Alex and trying to keep the door open externally, they are extraordinarily realistic inside that building that it is going to be a long shot, at the very least for him to start the season, if not for him to play at all.

"They are progressing with their offseason as if they will not have him because they don't want to be caught with their pants down."

Hoffman went on to dispel another report, this one from Steve Wyche of NFL Network, who said the Redskins still have to "gauge" McCoy's health coming off a fractured right fibula.

"Had the Redskins made the playoffs," he added, "Colt McCoy would have been available."