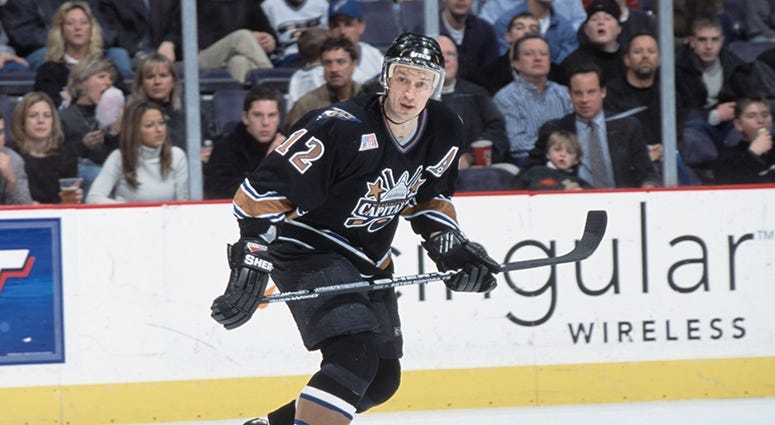 Jakub Vrana is in the midst of a breakout season for the Capitals, on pace for the highest point production of his career.

With 35 points on 18 goals and 17 assists total, Vrana's had four multi-goal games this season, including a hat trick against Calgary in November. His latest multi-goal effort came in Sunday's incredible comeback win against San Jose, two goals the Caps couldn't have done without. Vrana's played so well thus far, he has Craig Laughlin making big projections for his career arc.

"I will tell you analytically that over his first three years, he scored most of his goals right in home plate area, which is from the post to the dot, to the top of the circle in the high-rent district," the Capitals TV color analyst said during his weekly 106.7 The Fan segment, presented by American Standard Heating & Air Conditioning.

"I think now this year, I see a big change in him being able to combine the foot speed that he has with the hands," Laughlin added. "And the hands have caught up to his foot speed, and because of that, he's been able to bury guys."

"It's funny that you guys mention this, because I was talking to (my daughter) this morning and we were going over Caps in the future," he said. "Who's going to be the next guy?

"And I said, 'You know what, Courtney? I think Vrana's gonna be the next Peter Bondra here.'"

Next to Alex Ovechkin and Nicklas Backstrom – one of the greatest hockey duos every paired – anyone looks inferior, but here's where Bondra still ranks among Capitals all-time leaders in the following statistical categories: Goals (2nd – 472), Assists (9th – 353), Points (3rd – 825) and Games Played (3rd – 961).

As you can see, comparing Vrana to Bondra is no small praise.

"I think he's gonna take the next step, and Ovi and Backstrom, when they're on the back nine, he's gonna be the guy that's gonna score 40," Laughlin continued. "And I'm not sure he can't score 50, guys. This guy is that good. He has the type of speed that you need in this game. And I think now his hands have caught up to his feet, and because of that, we're gonna see great things from Jake The Snake."