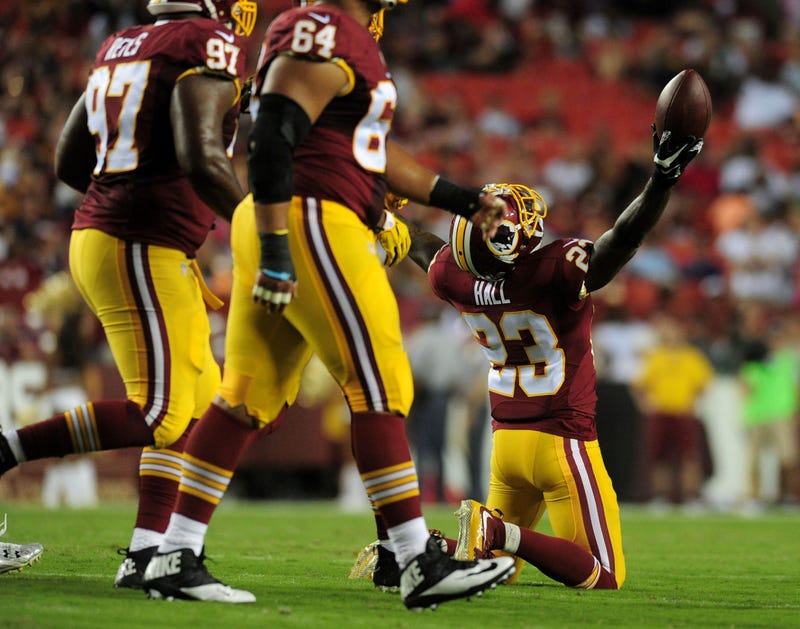 Redskins defensive back DeAngelo Hall tells 106.7 The Fan he is not officially retiring, clarifying remarks he made earlier Monday at teammate Ryan Kerrigan's charity golf outing.

DeAngelo Hall has not yet officially decided to retire despite reports.

According to John Keim of ESPN and Michael Phillips of The Richmond Times-Dispatch, Hall said he was "done" with football, adding later, "I'm not playing. That's for damn sure. But yeah, all the other stuff is still on the table."

All the "other stuff" Hall was referring to were the post-playing-career options he's been mulling over, which, as he told Keim and Phillips, include the possibilities of getting into coaching, a front office role someplace, or serving as a television analyst.

"John was asking me some questions," Hall explained to Chris Russell of 106.7 The Fan. "The biggest question was, 'Hey. What's next?'

"And that was while I was practicing on the practice tee," Hall said. "By the time I got in my cart and I was getting ready to get with my group, I was bombarded by text message after text message: 'Congratulations!' And I'm like, bro, what is going on? What just happened? And so it kind of just snowballed from there."

While Hall did not question the veracity of what the reporters quoted him as saying -- in fact, he agreed they had probably quoted him correctly, and also vouched for their credibility -- he was certain to clarify that, standing on the tee box and already late, he felt hurried to get his warmup cuts in and may not have entirely thought through what he was saying for public record.

At one point, Hall even mentioned his desire to wait for the right moment to announce his next move -- whatever that may be -- and wanting to not impinge on the recent retirement announcement of longtime Cowboys tight end Jason Witten. Hall also said if he were to announce his retirement, he'd like the opportunity to make it more formally, in the presence of those who brought him into the Redskins organization.

Hall hinted at the national deal he might be waiting on, telling 106.7 The Fan he'd recently held a meeting with NFL Network "a couple weeks ago."

"You know, I was in LA with NFL Network a couple weeks ago and I wanted to do it then, but the time wasn't right," he said. "Jason Witten had just announced (his retirement). I didn't want to take anything away from him and so I just wanted to wait for the right opportunity for myself to do it. I kind of wanted to go out, I wanted my one last hurrah, and so I didn't want to announce it over social media or anywhere else besides in that Redskins building, that I've spent the last 10 years of my career, on stage with the group of guys who brought me there."

To everyone who sent their love and wishes thank you but I haven’t retired. However I do think I’ve played my last football game. But my official retirement announcement won’t come until I’ve 100% committed myself to the next chapter of my life. Which I haven’t yet decided. #HTTR