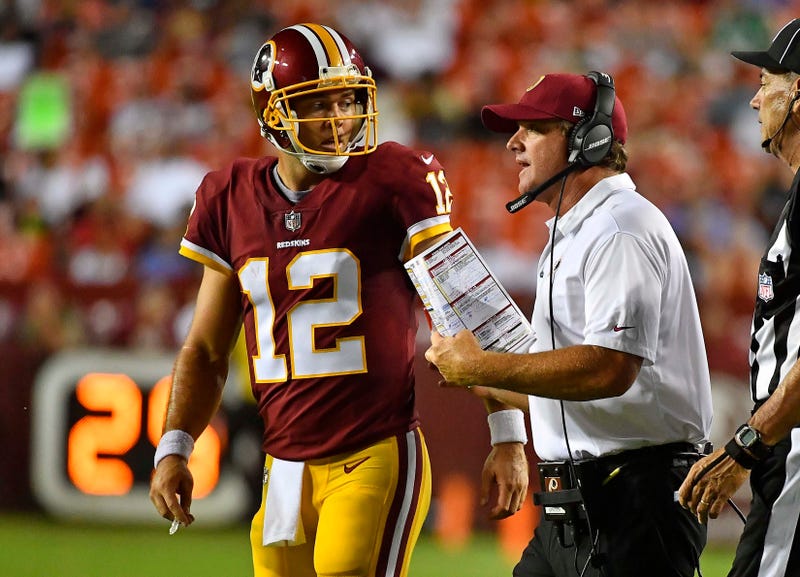 Colt McCoy has spent the last five seasons with the Redskins, and now gets the chance to start after Alex Smith was lost for the year in Sunday's loss to the Texans.

And according to DeAngelo Hall, Jay Gruden has considered McCoy more than capable of running Washington's offense for a long time.

"Jay really likes Colt, man. I mean really likes Colt, to a point that if situations were a little different with the whole Kirk (Cousins) situation, I think Jay probably would have went with Colt at some point, and let Kirk walk," Hall told The Junkies Monday.

"Jay really, really likes Colt, and those guys in that locker room, they like Colt as well. They'll fight for him, and I'm excited to see him go out there and play."

In case you don't remember, McCoy actually took over for Cousins at one point during the 2014 season, helping lead the Redskins to wins over the Titans and Cowboys.

He started three more games later that season after Robert Griffin III got benched, Washington losing all three, and he was placed on injured reserve with a neck injury on Dec. 16, 2014.

McCoy's appeared sparingly since then, but Hall believes he could give the offense a spark it has been missing.

"I've said it all along: for this team to really think we can get into the playoffs and make some damage, they have to be able to score more points," said Hall. "I think this definitely does bode well for this team moving forward. Colt knows this offense better than Alex Smith."

"I think he'll do absolutely fine, and I think this offense will be able to score more points to ultimately help them win more games. Because you gotta score points in this league, no matter how good a defense you got."

McCoy will get his first start of the year Thursday in a huge Thanksgiving game at Dallas, a place he helped the Redskins beat the Cowboys four years ago. Will history repeat itself?