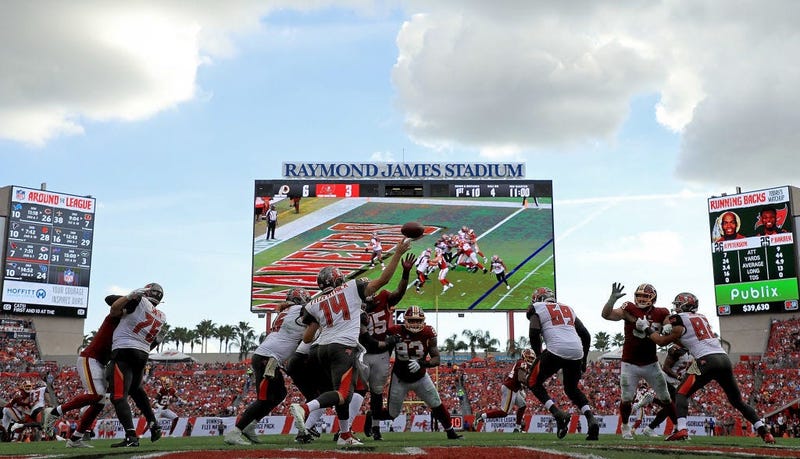 Maybe it's fitting that it took another road win for Josh Norman to remark on the state of Redskins fandom.

"I feel like we play better on the road," Norman told reporters after a 16-3 win at Tampa on Sunday. "I’m not gonna lie."

"Gosh man. It seems like our true fans, they're really with us on the road and we feed off of that," Norman said. "When we go into the home stands, it seems like an open bubble or something. Like the other team's turf or something. You hear more of them than you do us. Then, if something bad happens, they sulk. They sit back in their seat and they boo. I don't know.

"It started to be this year that we started to see that. It's kinda crazy because the first couple of years I've been here, you would see sellouts and all happy and excited and all for the Redskins, but now you go around see the whole NFC East teams – the Philly's, the Giants and even Dallas – they sold out. People in the seats, they're cheering for their team. Regardless good, bad or indifferent, they still showing up each and every week going hard. Even the Giants, when they was 1-6, hell they had a sellout crowd. They was all in there packed still!"

"We can play all our games on the road, if you ask me," Norman went on to say.

The 6-3 Redskins are 3-2 at home and 3-1 on the road this season. Norman isn't the first player to comment on Redskins fans.

After a Week 2 loss to the Colts in the Redskins home opener, running back Chris Thompson, when asked about a lackluster home turnout, asserted that he noticed, adding, in part, "As players, we go out there, we want a lout crowd. We want a crowd out there to give us a boost."
Redskins safety D.J. Swearinger agreed with Norman on Monday, telling 106.7 The Fan's Grant Paulsen and Danny Rouhier, "I would rather play on the road, too."

"You would?" Paulsen asked.

Asked for his line of reasoning, Swearinger said, "Because you can hear on the road. You can hear communications. You don't have to worry about fans booing you. You ain't got to worry about seeing the other team's jersey everywhere – you know it's going to be the other team's jerseys because you're away. Home games, that's some of the worst things I've seen. I've played on four different teams. Never seen it that bad, you know with other teams' jerseys in the stands, with the boos, whatever it may be. I've never been a part of nothing like that."

Asked if it affects him as a player, Swearinger said, "It affects you to the point to when you want to get the crowd involved. I recall when I was in AZ or in Houston, I would always wave my hands up just to get the crowd up. But, you know, if I do it here, it's like a blah."

"I'm stretching my arms. Like, nobody don't see us getting the crowd up," Swearinger said. "But I guess that'll take time because we haven't won. But you can't really say that, because I've been in Houston and AZ where they haven't won, but those die-hard fans will go out win, lose or draw. So that's no excuse of losing. Every NFL team loses. No NFL team wins the Super Bowl every year."

When asked why it might be different here, Swearinger wondered if it's because the Redskins span D.C., Maryland and Virginia.

"We're the Washington Redskins, but we don't play in Washington; we play in Maryland and we live in Virginia," he said. "So I don't know if that has anything to do with it, if the states matter. I'm from South Carolina, but it's the North Carolina Panthers. I know in my state, people either go to Atlanta or they go up to North Carolina, and that has a part to do with it, where North Carolina's not in South Carolina. That's not our home team. And some people be like, 'OK. Well, it's Carolina. That is our home team.' So I know down south it's a little different, so I don't know if it's like that up here."

"People that live in D.C., very few of them are from D.C.," Paulsen noted the transient nature of NFL fandom in the area. "People move here for work or whatever, so you have so many more fans here that are Steelers or Packers fans."

"I feel like they come from whatever they feel like their organization is," Swearinger said of other teams' fans invading FedEx Field. "If they're Dallas fans, if they're Atlanta fans – whatever fans they are, I feel like they just support their team. I don't know if we have that full support of loyalty to the fans. You know, we may have a lot of Redskins fans, but the loyalty, I don't feel the loyalty."

Paulsen called upon a recent conversation with former Redskin Fred Smoot, who believes his era of Redskins teams (2001-09) ruined it for the current generation.

Fred Smoot, randomly, while looking out the window, searching for life's answers at @NBCSWashington just now: "I think my generation of Redskins ruined it for these Redskins. People came out to watch us play and we had no chance to win."

"Not really," he said. "I've been liking a team since I was a kid, regardless of their record. I'm still going to be that fan. I'm still going to be die-hard for the Lakers. I'm not going to change that, so that's how I feel about basketball. It may be different, but that's just how I see it. If you're a fan of something, you can't be a bandwagon, you can't jump off that bandwagon.

After Norman's comments aired during a late-night episode of ESPN's "SportsCenter" on Sunday, host Scott Van Pelt, a local native, had this to say to his viewers.

"He was talking about how they don't get support at home, which, having grown up there is an amazing thing to hear," said Van Pelt. "But he's right. The days of RFK and the legendary D.C. home field are long gone.

"There are a lot of reasons for it. Mostly, decades of poor performance. But the arrogance of this franchise, to just assume the loyalty of the fanbase was forever, has come home to roost. Now the bandwagon's still a powerful thing and it can fill up, but so too is the atrophy that this fanbase has undergone. So I can understand and appreciate his frustration, because it's real."

After Sunday's win, Swearinger took a victory lap around Raymond James Stadium, high-fiving Redskins fans who traveled to support the team on the road.