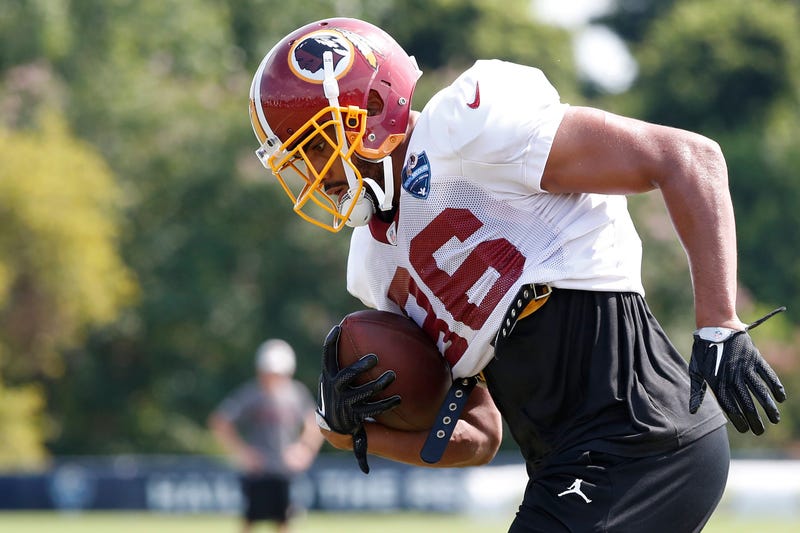 The first step to fixing a problem is identifying it. When Jordan Reed stepped on the treadmill this off-season for a power output test, the Redskins found a problem.

"When I tore my hamstring, the way we found out about the discrepancy was we got on the treadmill and it measures that power output on both legs,” Reed told The Fan during an exclusive sit-down in Richmond. “I had a tore hamstring on the right side, and I still was putting out more pressure on my right leg than I was on my left, even with the torn hamstring.”

Reed’s coaches had always known he was more explosive cutting to his left, pushing off his right leg. Now they understood why. His right side dominance defied logic.

"My right side's been stronger than the left side as long as I can remember," Reed said. "But with the fractured toe on the left side, it just caused my right side to do even more work than it has been in the past."

The uneven power output is just one of the things that Reed and his team of doctors, trainers and physical therapists worked to fix. It all started with surgery to remove the sesamoid bone in each of his feet.

Reed found out before last season he had fractured that bone in his left big toe, but instead of having it removed, Reed decided to get a stem cell shot. Not only did that not fix the problem, it made it worse.

"It ultimately made the sesamoid injury a lot worse, causing me not to be able to walk for a month, and not be able to run until like two weeks before the season," Reed said. "I was set back a lot by that. And that caused a lot of other problems just compensating for the left foot, running on the fracture all season. Ended up tearing my hamstring later on in the year from overcompensation."

"We pretty much rebuilt my body from the ground up," Reed said. "That took a lot of time, just to reprogram the body to do what it's made to do, and we accomplished our goal."

The team of specialists worked to fix Reed’s firing patterns, so that the proper muscles would be recruited at the right time. For instance, they wanted to ensure power is generated from the glutes and stabilization comes from the core. When those things are wrong, there is undo pressure in those muscles which can cause injury in the connecting joints, ligaments or the muscles themselves.

When Reed says they started from the ground up, he means it literally. They discovered his left arch wasn’t as strong as his right. They fixed it, and strengthened both feet before moving up the leg to the calves, quads, hamstrings, glutes and eventually his core.

The result is Reed feels stronger than he has in years. While that’s no guarantee that he’s going to stay healthy, he’s put himself in the best position possible to do so.

It’s no secret that Jay Gruden’s offense changes completely when Reed is present.

“He can run any route from anywhere,” Gruden says of his favorite weapon. “In the slot, in the corner, outside, split outside, creates matchup problems, gives us man-zone tips, and he can beat corners, he can beat linebackers, and he can beat safeties. So, it’s hard not to throw him the ball when he’s in there. That’s how good he is."

He told reporters Thursday morning that Reed could practice fully, but they want to ease him in and be extra careful to make sure he’s ready for the season.

Reed found the problems and put in the work to fix them. Now it’s time to produce.