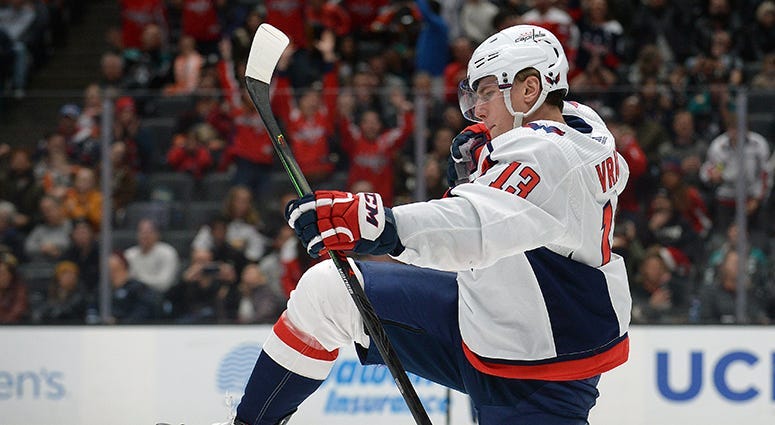 Capitals winger Jakub Vrana is on the brink of surpassing his career high in points, a mark he will no doubt shatter before it's all over this season.

What kind of ceiling are we looking at for Vrana? Because of his durability, Vrana – who's played in all 54 games for the Caps in 2019-20 – makes this exercise all the more seamless.

The Caps still have Kuznetsov. Now they have Vrana – along with Ovi, Backy and John Carlson – too. If all five of the current team points leaders crossed the threshold, it would be the first time in Ovechkin's career the Caps have had as many players finish with 65-plus points.

Only Backstrom is trailing that pace, at 41 points. He's failed to reach 65 points in just two seasons. Once was when he missed 40 games due to injury in 2011-12. The other was the lockout-shortened 2012-13 season, when the league was limited to 48 regular-season games. Vrana is becoming the difference maker the Caps have been waiting for.

"He just always seems to be in the right spot at the right time here lately," Center Lars Eller said last week during his weekly 106.7 The Fan appearance, driven by AAA. "I think he's a threat pretty much every game right now."

"He's bringing it consistently, using his assets of speed and skill and shot," he said. "Many times he needs very little room to get it off and he gets it off quick. You know, he's been on a heater now, but I think we should expect him to play at somewhat of that level going forward. That's what he's capable of. He's turning into a great player."

In a nine-game points streak stretching from the Caps' 4-3 win over Carolina on Jan. 3 to their 4-2 win over Montreal on Jan. 27 last week, Vrana tallied 11 points (8 goals, 3 assists). Seven of those goals came on even strength. With four multi-goal games in 2019-20, the second-liner's transforming into the type of scorer that can pour it on in bunches. He's also produced multi-assist totals twice this season.

Last month, Caps television analyst Craig Laughlin called his shot, telling 106.7 The Fan he sees Vrana as Washington's next Peter Bondra, the type of star capable of carrying the Caps into the future when Alex Ovechkin and Nicklas Backstrom begin to slow down.
"When they're on the back nine, he's gonna be the guy that's gonna score 40," Locker said. "And I'm not sure he can't score 50, guys. This guy is that good."