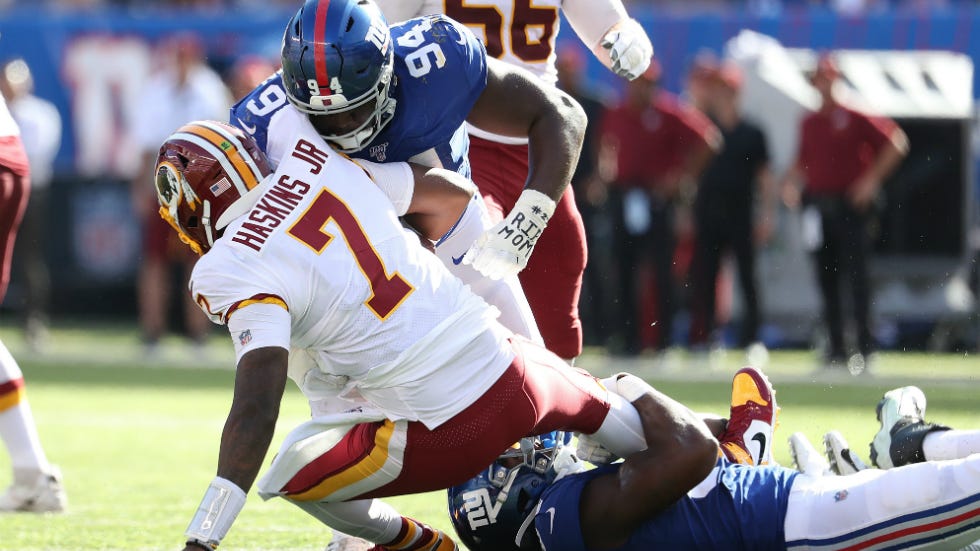 The one constant with the Washington Redskins the past few years: Quarterback uncertainty.

And despite trading for Alex Smith during the 2018 offseason, Case Keenum last offseason, and drafting Dwayne Haskins with the No. 15 overall pick in the 2019 NFL Draft, uncertainty has remained.
Part of that uncertainty has come in the form of multiple reports indicating a rift, starting before the draft, in thinking between head coach Jay Gruden and team president Bruce Allen and owner Daniel Snyder.
Les Carpenter is the latest to report of a disagreement between the head coach and the Redskins ownership over Haskins. According to "a person with knowledge of Gruden's thinking" the Skins head coach "did not want Haskins," Carpenter wrote in The Washington Post Friday.

Carpenter added Haskins has downplayed the idea he wasn't Gruden's top choice publicly but citing a "person close to the rookie quarterback," Haskins has evidently sensed that is the case.

Last week, after college football analyst Joel Klatt said on the Rich Eisen Show the Redskins "coaching staff never was on board with the selection," Haskins called the report in a Twitter post: "Fake news." Haskins later deleted the post soon after it was posted.
Prior to the NFL Draft, 106.7 The Fan's Grant Paulsen reported, "(Snyder) loves Dwayne Haskins and, I think, Bruce Allen, from what I was told, loves Dwayne Haskins... The football guys don't as much."
Paulsen added Gruden likes Daniel Jones and Drew Lock and "I don't think (Gruden) wants to take a quarterback at all, for the record."
After training camp, with veteran Colt McCoy injured, the starting quarterback job went to Keenum over Haskins, who by all accounts from outside the building won the job outright. However, Keenum has struggled during the season leading to his benching in We