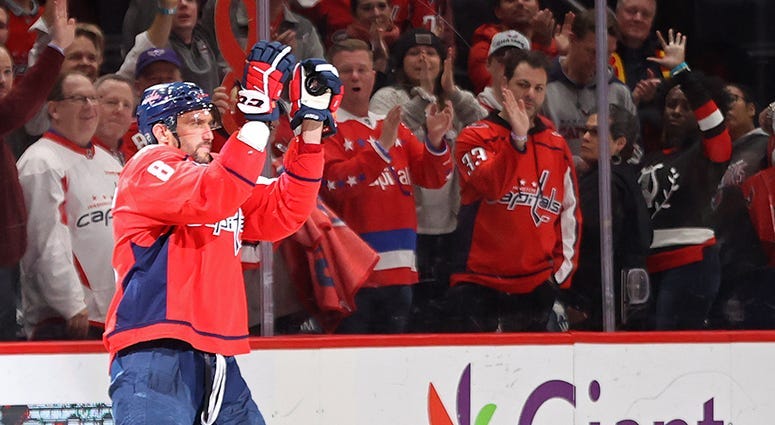 This insane tear has included not one, not two, but three hat tricks – a hat trick of hat tricks, as it were. And a natural hat trick to top it off, with Ovi scoring three uninterrupted goals in the third period of Tuesday's 4-2 win over the Kings. Consider, too, the Caps were trailing 2-1 as late as with 8:27 left in the game. Ovechkin single-handedly vaporized LA's lead and handed the Caps a two-goal buffer in the span of five minutes.
That mesmerizing performance brought Ovi within two goals of the elusive 700 club, which has previously accepted only seven members. Just 10 goals stand between Ovechkin's 698 and Hall of Famer Mike Gartner for seventh all-time as he continues his historic climb. And few would have thought it possible at the start of the 2019-20 season, but look out, Phil Esposito (717).
"There's a way Ovechkin plays normally, and then there's whatever's going on right now, and it's this unbelievable explosion," 106.7 The Fan's Chad Dukes told John Carlson during his weekly appearance, presented by The Purple Heart. "Does he seem to go on like a record jag?"
"I feel like whenever there's one of these things where like I can knock this down, I can pass this guy, it seems to be very motivational to him. Is that what we're seeing right now?'

"I think so. And I think he's coming off of a little bit of a dry spell, for him anyway," Carlson answered. "Not for almost everyone else, but for him to come back. When goals go in, they go in, and as a player you like to see that happen for yourself and you gain that confidence. And you give that guy a little confidence and good feelings, and he's gonna make you pay."

"The tear he's been on is insane," Carlson said. "I got asked the other night, 'What do you think about how many goals he's scored in such a short amount of time?'

"And I said, 'That would be a great season for 90 percent of the league.'"

Asked if teammates try to avoid Ovi in the locker room, lest they risk bumping him off his hot streak, Carlson said, "No. He always just goes about his business the same way, whether he's scoring a hat trick every night or going through a little dry spell."

"So that's great for life as teammates and everyone just kind of rallies behind him," he added. "And when he turns it on, I think everyone takes note and follows suit."

news
Buy handcrafted items from these 4 AAPI women-owned businesses
news
Employers starting to ask: When and how can people safely return to the workplace?
news
Choral groups anticipate performing live again, this time with COVID-19 checks in place
news
Couple says taking a 'gap year' helped save their marriage
news
Bestselling author Glennon Doyle launches new podcast
music
Sum 41's Deryck Whibley on 20 years of 'All Killer, No Filler,' and the moment they missed with DMX