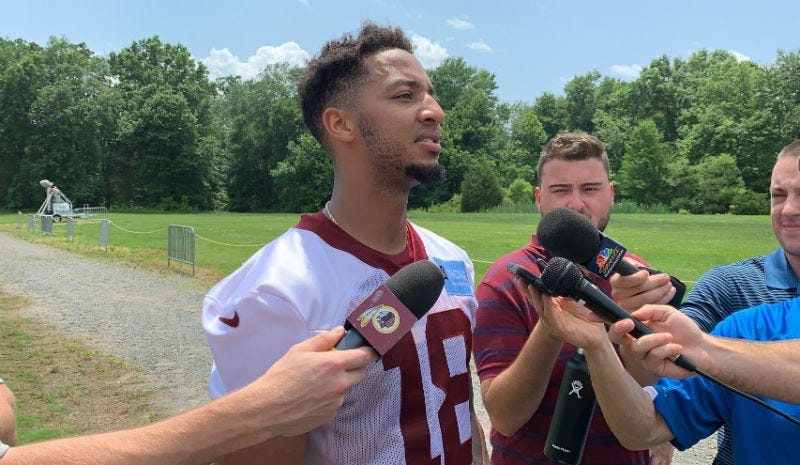 Josh Doctson doesn't feel like he has to prove anything to anyone heading into his fourth season with the Redskins.

Doctson is coming off a two-touchdown, 532-yard 2018 season and has recorded 1,100 reception yards and eight touchdowns since being selected 22nd overall in 2016.

"I'm not trying to prove nothing to nobody," Doctson said at Redskins Park on Wednesday. "I'm just trying to get on chemistry with these quarterbacks and trying to find a fit."

Asked if he was surprised the Redskins declined to pick up his fifth-year option in May, Doctson replied, "Nah. I think it's just, man, I'm hitting free agency next year. I won't be the first, I won't be the last that this has happened to; or not even a fifth year, just a fourth year going into their fifth season.

The Redskins could have picked up Doctson's option as early as Dec. 31, 2018, meaning he waited four months to find out whether he would be an unrestricted free agent following the 2019 season.

"I mean, it's nothing to be sad about, be mad about," he said. "Somebody wants you out there, so it's all love."

Now 26, it feels different for Doctson to be one of the older voices in the receiver room.

"Yeah I feel different. I've aged," he said. "I'm a year ahead of most of these guys, a couple years. Moving up, third oldest in the room. I think with experience comes knowledge, so I think I've gained a lot more knowledge."

Doctson acknowledge it is a weird feeling, but not one he's unfamiliar with.

"It's like college, though, you know? Going from, shoot, even from high school," he said. "So this is same thing, different stage. I like it, though. I've got a lot of these guys ask me questions, look up to me. I appreciate that and I try to steer them in the right way."

One of those young receivers new to the receiver room is third-round pick Terry McLaurin, who could potentially be Doctson's replacement on the roster a year from now, or even sooner. Doctson's first impressions of both McLaurin and first-round pick Dwayne Haskins have been positive.

On Haskins: "He's good, man. He's a quick learner, I'd say. I don't know what they did over there at Ohio State, but they was doing something right, because he's come in here and he hasn't really hesitated. He's real quick, he makes his decisions quick and he throws with a lot of accuracy."

McLaurin has been a quick study, too.

"Yeah. Yeah. Them Ohio State kids are fast, man," Doctson said. "I like what I see and that's going to be a good compliment to the offense."

After three years in the league, Doctson no longer feels the pressure that comes with being a first-round pick.

"Do I feel that pressure? You know I did when I first got here. I think the first two years," he said. "My first year I was injured, second year I felt the pressure, and now it's just playing ball. There's been – what – three or four first rounds since me, so that pressure's on them more so than (me).

"I just can play ball now. So it's a good thing and a bad thing I guess, maybe, but it is what it is. I think that's the pressure of the world versus the pressure you're putting on yourself. So once you see what you're thinking about, you can just relax and play ball."

When exactly did Doctson stop feeling the pressure of his first-round billing?

"After my second year," he said. "I was hurt my first, second I played and I was trying to figure it out, and third I had four different quarterbacks, so we'll see what happens this year."

Asked from where he draws his motivation, Doctson said, "I think just my knowledge of the game, knowing that I'm kind of crossing over into the peak of my career."

"My time is running out like time sand," he said. "So I think it's just kind of more of an emotional last half of my career, where it's just like, man, this will be the last time I tie these cleats. So I guess it's kind of definitely leaning me more in loving the game as the years advance."

Josh Doctson, with 1,100 yards and 8 TDs since going 22nd overall in 2016, says he doesn’t have anything to prove heading into Year 4: “I'm not trying to prove nothing to nobody. I'm just trying to get on chemistry with these quarterbacks and trying to find a fit.” pic.twitter.com/ptMHFt0IBz