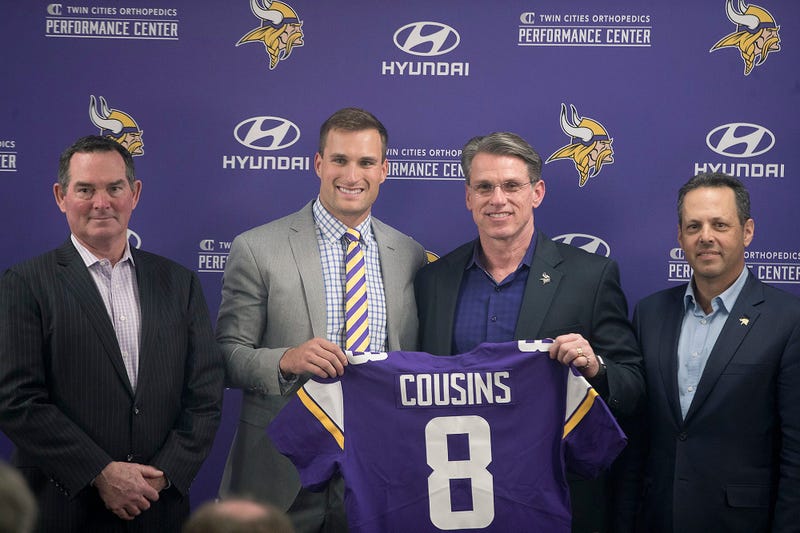 Kirk Cousins hopes to establish a new precedent with his Vikings deal, the first of many to receive fully guaranteed NFL contracts.

The former Redskins passer is set to earn $84 million over three years in Minnesota -- all of it fully guaranteed. That would be the norm if he happened to play another sport, baseball or basketball, professionally. But in NFL free agency, initial contract figures are too often a red herring. Only once the guaranteed money is announced can fans begin to grasp how long to expect to see a player in uniform for their team.

Standing in the way, McCartney explains, is an antiquated caveat in the Collective Bargaining Agreement with regards to funding future moneys for long-term contracts. The 'funding' rule:

Section 9. Funding of Deferred and Guaranteed Contracts: The NFL may require that by a prescribed date certain, each Club must deposit into a segregated account the present value, calculated using the Discount Rate, less $2,000,000, of deferred and guaranteed compensation owed by that Club with respect to Club funding of Player Contracts involving deferred or guaranteed compensation; provided, however, that with respect to guaranteed contracts, the amount of unpaid compensation for past or future services to be included in the funding calculation shall not exceed seventy-five (75%) percent of the total amount of the contract compensation. The present value of any future years’ salary payable to a player pursuant to an injury guarantee provision in his NFL Player Contract(s), shall not be considered owed by a Club under this Section until after the Club has acknowledged that the player’s injury qualifies him to receive the future payments.

All that legalize can be summed up as a requirement for teams to set aside future guaranteed money ahead of time, effectively limiting the amount teams are comfortably willing to guarantee.

"What really holds it back is, in many cases, the funding rule, which is an archaic rule that makes the team send the NFL any future dollars, that money, to hold in escrow," McCartney said. "And so, it makes it really difficult for a club, because in many cases it can be a lot of money. So, if somehow, some way, they can get rid of the funding rule, I think it could become much more the norm as opposed to just one time."

Beyond what Minnesota owes Cousins in 2018, it must set aside the remainder of his guarantees -- what amounts to $58 million -- now for a later date.

"It was put in in the late 60's, before there was TV money," McCartney explained the genesis for this little-known rule. "And my understanding was, back then, some teams weren't necessarily paying the players on time, so the league instituted this funding rule that said, 'Any dollars that are guaranteed in the future, you have to write a check for that amount and we will hold it in escrow.' And so then the TV money starting coming in -- some time in the 70's and 80's -- and now it's so big that there's no need for a funding rule. And yet, it's still in the books."

"And this is true of any contract, rookie contracts included, any dollars that are, in this case, guaranteed in 2019 and beyond," he said. "Those dollars, the team has to write a check for and send it to the NFL. So hopefully, I think the hope on players' and agents' side is they'll get rid of this funding rule and we can now just really negotiate deals that make sense for a player, and for some players, having guaranteed dollars in Year 3 or even in Year 4 aren't prohibited now because of this funding rule."