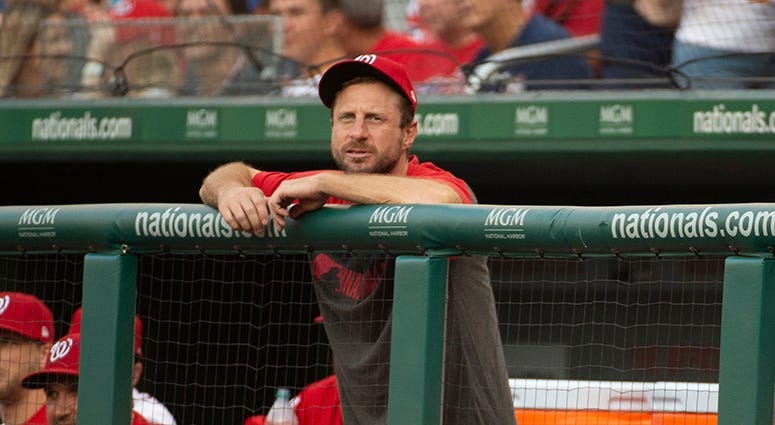 Max Scherzer expects to be ready to go as soon as he's eligible to return from the injured list and believes his upper back strain to be "nothing major."

Scherzer is on the shelf with a "mild rhomboid strain" until at least Aug. 5, his second IL stint due to back-related complications in the past month. After 18 full days of rest the first time around, Scherzer's back flared up again after his most recent start against Colorado on July 25, forcing his return to the IL retroactive to last Friday.

"It's just frustrating. For me, what I was dealing with kind of the first time around, I was able to heal up. I was throwing bullpens at 100 percent, recovering from those bullpens going out there throwing 100 percent," Scherzer told 106.7 The Fan's Grant & Danny, presented by F.H. Furr.

"I thought I was ready to get back in game action," he said. "And after the Colorado start, I could feel my back tighten up again. Obviously that's when I got another MRI, everything checked out.

"It just shows just a mild back strain just back there. It's nothing major. All the doctors, they've all talked and conversed and they're on the same page, and they think this is just a little 10-day injury. Nothing more than that. As frustrating as it is on one hand to not be out there pitching, on the other hand, considering what we're dealing with, of just a muscle strain, this actually, in some ways, can be a good thing."

The injury was a bit of an awkward first for Scherzer. In his 12-year big league career, he'd never before re-injured himself after returning from an injury.

"That's why this is the most confusing thing to me," he said. "I really don't think I came back too soon. In my entire life, every time I've been able to throw the ball full-out, I've always made my start and been healthy through it. This is the only time that I've ever had any type of injury where I am throwing full-out, I'm throwing a full-out bullpen, and had any type of ailment become worse or re-injure myself.

"That's why this has been frustrating for me, because of how I was feeling the day leading up to the start, being back in this position."

"I think you'll be eligible to come off the injured list on Aug. 5," Paulsen noted. "It sounds like your expectation, maybe, is that you can throw right around then. You don't think this will be lengthy. Is that fair?"

"Yeah. That's fair," Scherzer replied. "I mean, when you look at all the doctors and what they're saying, I mean that's kind of the time schedule of what could happen over the next handful of days, of getting back out there. So, as much as it stinks to not be out there pitching, I've always prided myself on getting out there and making 33, 34 starts. To not be out there is frustrating. But at the same time, that's where it's frustrating on one hand. On the other hand, we're not dealing with anything major here."