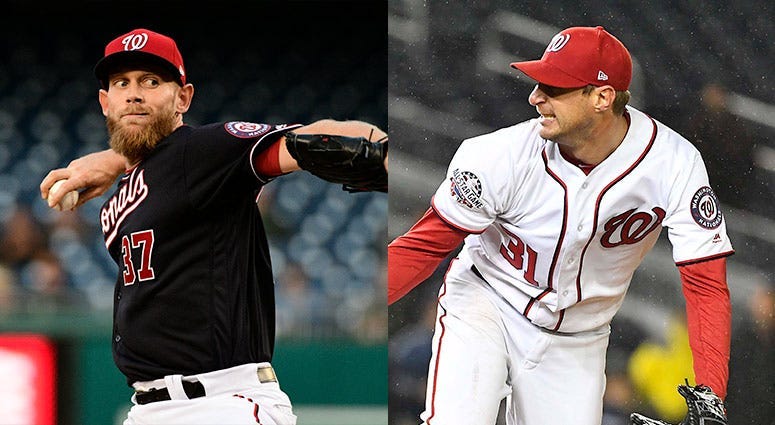 The Nationals entered the work week Monday on a five-game losing streak and in third place, having already ceded their division lead to the Mets after dropping two straight series to NL East opponents.

Their bullpen was taxed and the club was in desperate need of a win to stop the bleeding.

Max Scherzer and Stephen Strasburg answered the call, turning in a pair of brilliant outings, allowing zero runs across the plate over the next 17 innings. Scherzer pitched a complete-game shutout, allowing only two baserunners and striking out 10 batters along the way. Strasburg countered with a three-hit, eight-strikeout performance of his own on Tuesday.

It was enough to vault the Nats back into second place, if only for a day, and the type of pitching that could keep them alive well into October, should they ever get over that pesky first-round hump.

"It must really suck to have Max and Stras on your team," The Junkies said in jest to Nats GM Mike Rizzo on Wednesday.

"It's a great feeling when you can run those two kind of aces at teams," returned Rizzo during his weekly 106.7 The Fan appearance, sponsored by Burke & Herbert Bank. "They eliminate losing streaks and they give you a chance to win each and every time out."

Rizzo, to draw a comparison, evoked the names of two Hall of Famers, something he doesn't do lightly.

"It's as good a one-two punch as I've ever had since 2001, when I had Randy Johnson and Curt Schilling with the Diamondbacks," he said. "This is special stuff we're watching."

The names speak for themselves.

Johnson and Schilling joined forces to an especially heroic degree in 2001, when they were charged with halting a modern Yankee dynasty. A three-time-defending champion Yankee dynasty, looking for its fourth straight World Series title and fifth in six years.

Both pitchers were already well on their way to Cooperstown by that point, but neither Johnson, 37 years old, nor Schilling, 34, had yet reached the pinnacle of baseball, the right to call themselves champions, in five combined tries.

It had been eight years since Schilling, then 26, had even sniffed the postseason, exiting the 1993 World Series to the haunting tune of Joe Carter touching 'em all. Johnson had never advanced past a championship series. He'd in fact grown more accustomed to first-round exits in recent years -- sound a little familiar? -- losing three division series on three different clubs between 1997 and 1999 (Seattle, Houston, Arizona).

The thirst, as it is for the Nationals, was very real.

Johnson and Schilling combined for 43 wins and 665 strikeouts in 2001, Johnson touting a 2.49 ERA to Schilling's 2.98. And, come October, they put the team on their backs, starting 11 of Arizona's 17 postseason games, and accounted for four wins en route to toppling that Yankee dynasty, all the difference in a seven-game World Series.