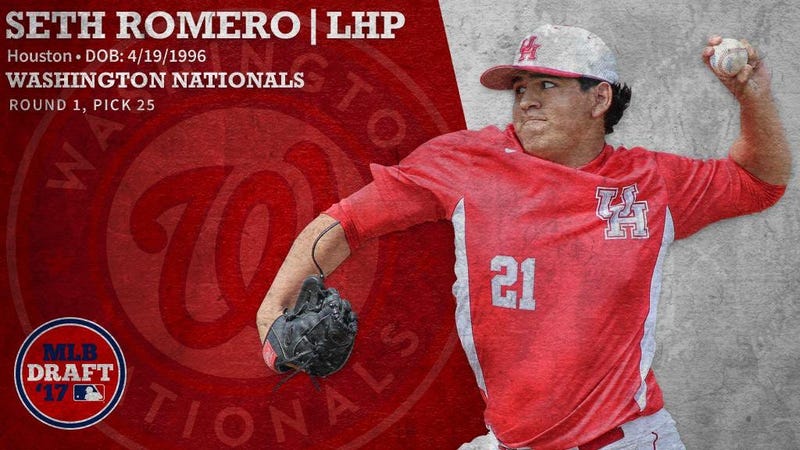 The warning signs were there. Seth Romero, the 22-year-old 2017 first-round draft pick of the Washington Nationals, had been kicked off the University of Houston baseball team for multiple issues, including a reported failed drug test.

The Nationals decided to take chance on the kid anyway, a 'kid' listed at 6-foot-3, 240 pounds, who sports big-league stuff, with a fastball that touches 97 and a plus slider.

So, a month into the big-league season, what's the latest with Romero?

"We're at Chapter 1 of this novel with Seth Romero," Nats GM Mike Rizzo told The Sports Junkies during his weekly appearance, sponsored by Burke & Herbert Bank.

"He's got big-league stuff. He's a big-league capable pitcher. He's a first-round pick that we have high expectations for," Rizzo said. "But no man is bigger than the organization. We have to get this thing right. We have to nip it in the bud. It has to be the Nationals way right out of the gate or you don't get the privilege to play in the Washington Nationals organization."

Rizzo says Romero has some "requisites" he must fulfill before he "has the honor to don a Washington Nationals uniform again."

"When he does, he'll be welcomed back with open arms," Rizzo added. "Until he does, he won't."

Rizzo did not expound on what those requisites might be.