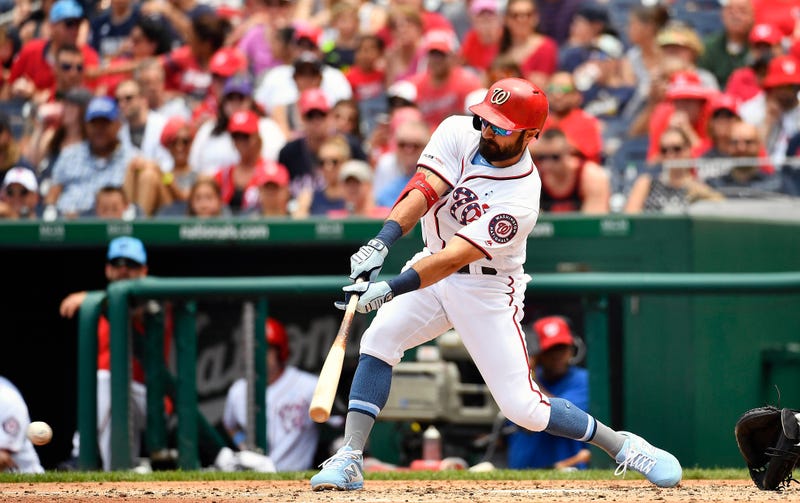 Nationals outfielder Adam Eaton is taking serious heat for comments he made regarding compensation and living conditions in the minor leagues.
Eaton, who spent a hefty portion of his professional baseball career in the minors, was interviewed by the Washington City Paper for a story on pay in the minors.

Eaton said he believes there is room to increase player salaries, but that significantly improving conditions in the minors could lead to "complacency."

"I think the system itself is unique in the sense that it doesn't allow you to make a living down there, and that for me is something that’s special," Eaton told WCP. "It doesn't allow people to get comfortable."

"If you do (improve conditions), complacency sets in. I don’t know, I think it’s difficult, yes, and it’s easy for me to say that because of where I am, but I wouldn't be where I am without that," he continued. "Salary wise, I think that maybe they could pick up a little bit. I think there’s a little room, a little wiggle room there, but I don't think there should be complacency down there."

"I don’t disagree with that they’re being exploited. I don't. But I think it’s for the betterment of everybody. I know it sounds crazy ... It’s hard for me to explain."

It's literally impossible to describe how stupid this is in the length of a tweet. I wish I had seen this yesterday for radio. Short version:Athletes are competitive AF. The best don't need external motivation. They sure as hell don't need that motivation to be forced poverty. https://t.co/8mHMqDHSpz

Adam Eaton is a delusional asshole who has lost what little perspective he ever had. Baseball is a game. Life is real. He clearly doesn’t understand that.

As awful as what Adam Eaton is saying directly about minor leaguers' conditions, Adam Eaton is also saying he doesn't try as hard bc he knows where his paycheck is coming from. Adam Eaton full-on piece of garbage.

"My quotes are simply from my personal experience. I wouldn’t trade my minor league experience for anything. As difficult as it was, it has made me the ball player/person I am today. I’m sorry if I offended anyone in anyway. Wasn’t my intentions."

It’s not ok to exploit anyone in any profession. The minor leaguers deserve better. They deserve more money. They deserve better conditions. Period. My quotes are simply from my personal experience. I wouldn’t trade my minor league experience for anything. As difficult as it was, it has made me the ball player/person I am today. I’m sorry if I offended anyone in anyway. Wasn’t my intentions.
A post shared by Adam Eaton (@adam_eaton2) on Jun 24, 2019 at 10:55am PDT
Eaton will be on Chad Dukes vs. The World Tuesday at 3:30.
Follow 106.7 The Fan on Twitter and Instagram.