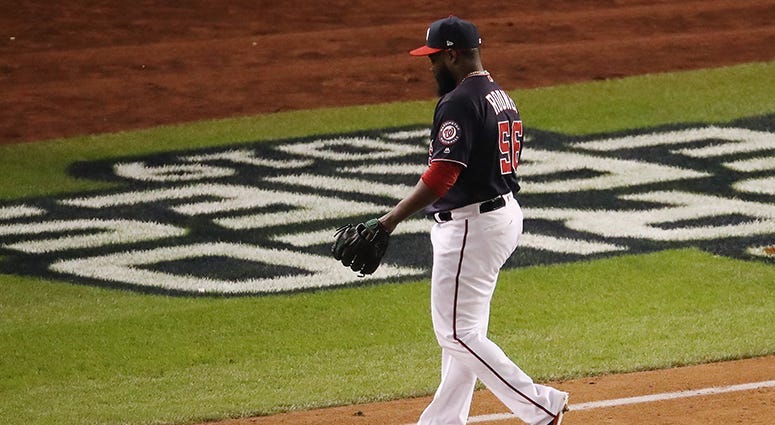 Photo credit Will Newton/Getty Images
By Chris Lingebach, 106.7 The Fan 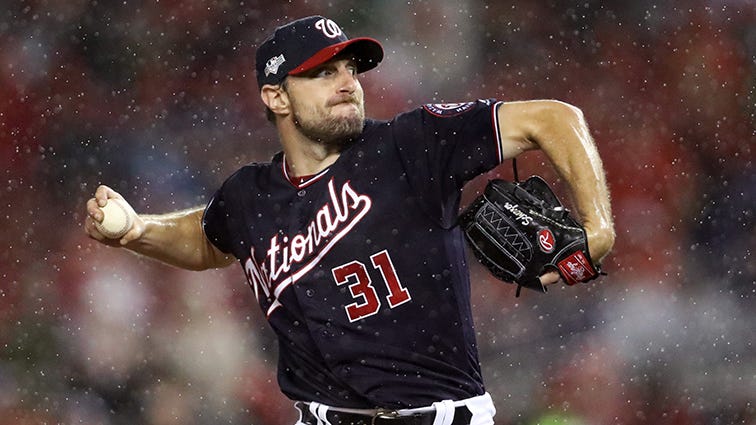 The Houston Astros have outscored the Washington Nationals 12-2 to steal Games 3 and 4 of the World Series on the road in Washington.

It doesn't take a sabermetrician to figure out that 42-year-old Fernando Rodney pitching on back-to-back nights in the World Series could lead to some bad results.

Yet with the Nats trailing 4-1 in the top of the seventh, that's exactly what manager Dave Martinez dialed up, when Tanner Rainey – relieving starter Patrick Corbin – put the first two batters on first and second on consecutive walks, and induced a quick fly out from Jose Altuve for the first out.

Rodney gave up a single on a 1-1 fastball to Michael Brantley to load the bases for Alex Bregman, who planted an 0-1 fastball – that hung over the inner-third of the plate – into the left-field seats for a grand slam. 8-1 Astros.

"He's been pitching good," Martinez said of the matchup. "He made a really good pitch to a really good hitter. Hit the ball off the end of the bat. Got a base hit. The next pitch wasn't his best pitch. He tried to go in, didn't quite get it in. He had him 0-1. He tried to go in and the ball just didn't sink in where he wanted it to be. He's come in for two innings and done really well for us. But I liked Rodney in that spot."

In fact, it's such the wrong matchup in that spot, it begs the question as to what Martinez was saving his other options for. Sean Doolittle and Daniel Hudson, both better options in a high-leverage situation, sat in the pen.

The shift in strategy came for Martinez in the bottom of the sixth, when the Nats failed to cut further into the Astros' 4-nothing lead after loading the bases against Josh James and then Will Harris. After Anthony Rendon singled to load them up, Juan Soto grounded out to first baseman Yuli Gurriel, who chose to tag the nearby first base rather than make an ill-advised throw to home to stop Gerardo Parra from scoring the Nats' only run.

Instead of capitalizing further with two runners still in scoring position, Howie Kendrick struck out to end the inning, with Washington trailing 4-1.

Martinez was asked if they'd scored more than one run there, if he would have thought about using Doolittle or Hudson, instead of Tanner Rainey, in the seventh.

"But Rainey's been our guy in the seventh inning," he said. "When he starts throwing balls, usually he can't come out of it. He got a big out for us and I honestly thought that Rodney was with the changeup on Brantley, which, like I said, Brantley's a good hitter. He threw a good pitch. Brantley put that ball in play. Then after that he just made one mistake and Bregman got him."

After throttling the Astros to go up 2-0 to start the series, the Nats suddenly can't score runs.

This doesn't paint a rosy outlook for their chances in the series, now needing to win two of the final three games, with Game 5 on Sunday representing their final home game of 2019.

Except, the Nats have their two aces going in Games 5 and 6, Max Scherzer and Stephen Strasburg, respectively. The two horses they rode here, to a combined eight victories this postseason, including Games 1 and 2 in Houston.

It's easy to feel dispirited seeing the momentum swing in Houston's favor, but Martinez and the Nationals are betting on their horses. Big time.

All season long, especially as Washington pushed closer to the postseason, you've heard General Manager Mike Rizzo utter some variation of this phrase: 'Our starting pitching is what got us here. We believe in our starting pitching.' He's said it not in defense of a perceived weakness (read: Washington's bullpen), but as a matter of fact.

One would be wise to know how Rizzo's own past could play a role in the Nationals' thinking. In 2001, Rizzo, then the scouting director for the Arizona Diamondbacks, watched Randy Johnson and Curt Schilling gut their way to a World Series title over a 95-win Yankees club that featured Roger Clemens, Andy Pettitte, Mike Mussina and Mariano Rivera.

Those D-Backs, too, got off to a 2-0 series lead, only to drop the next three on the road in the Bronx. Imagine the nerve it would take to come back in a series down 3-2 to the famed Yankees

Johnson pitched seven innings of two-run ball as the Diamondbacks romped the Yanks 15-2 in Game 6 and then, the very next night, Schilling dueled Clemens to the tune of a 2-1 Yankees lead into the eighth. Johnson, on no days rest, came into the game in relief of Miguel Batista, held the line for the next four outs, and Arizona made history in the bottom of the ninth.

The comparison of Scherzer and Strasburg to Schilling and Johnson goes further than just a frayed connection to Rizzo's distant past – it's what he actually believes.

Not for nothing, those Diamondbacks went 1-for-11 with runners in scoring position in Games 3 and 4. Sometimes the numbers are a window into a growing trend. Sometimes, they're just numbers.

Martinez has the unenviable task of managing the game and the series simultaneously, managing for now, and for later. In a seven-game series, in which the Nationals unquestionably have an A-squad and B-squad in their bullpen, Martinez chose to save the A-squad for his top starters, Scherzer and Strasburg, given that he still has three games to play with. It's a daring strategy that could easily backfire, but the bats weren't there when decision time came.

"I know we've got a day off the next day," he said. "All of this was talked about before the game. But when you're down still three runs – and like I said, Rainey's done well for us. It just happens he couldn't throw strikes today."

"Hey, we've been here pretty much all year," Martinez would say. "Now it's the best two-out-of-three, right? We've got two of our big horses going in the next two games, so we just gotta come back. We haven't hit in the last couple days, but I've got confidence we'll bounce back and be ready to play tomorrow.

"It's just one of those things. It's baseball. At the end, it's the World Series. I just told the boys, 'Hey. We're in the World Series. We're going to play Game 5, tied 2-2. Who would have thought that in the beginning? So here we are. So let's forget about it. Can't do nothing about the last two games. Let's look ahead and get ready to play tomorrow.'"

When asked if somebody were to tell him, going into the World Series, that they'd be tied 2-2 with the Astros with Scherzer and Strasburg on the mound for Games 5 and 6, if he'd be worried, Rendon said "not at all."

"We're gonna take it how it is and just try to win one more series, treat it as a three-game series," said the Nats third baseman and NL MVP candidate. This was after Martinez spoke to his club.

A three-game series is what they have now. The best two-out-of-three leads to a World Series title. The Nationals have Max Scherzer and Stephen Strasburg on the mound.