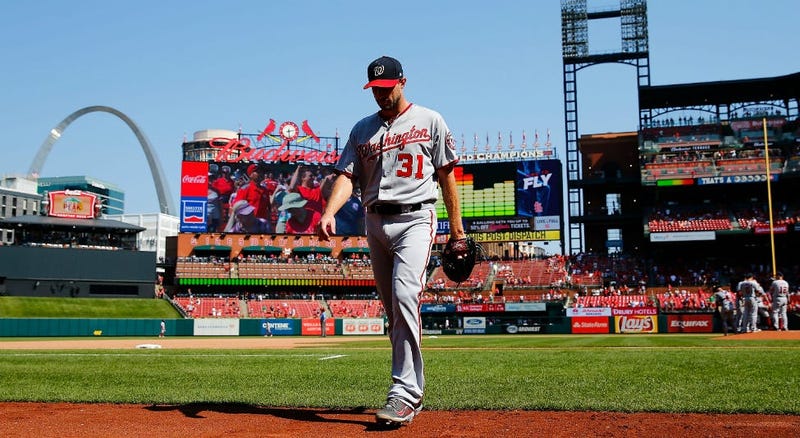 ** This installment of Race For A Red October is presented by PVI Office Furniture.
With 11 games to go in their regular-season slate, the Washington Nationals seem destined to flirt with disaster until the end.
What was once a healthy lead for the first Wild Card spot has dwindled to just one game ahead of the surging Milwaukee Brewers (8-2 in their last 10), thanks to a 7-10 September record.
Worse yet, the Chicago Cubs are only one game back of the Brewers, which sets up a scenario where a bad weekend series could land the Nats on the outside of the playoffs looking in.
Fortunately, the scheduling gods smiled on the Nationals late in the season, giving them one last series with the Miami Marlins, who have gone belly-up with a 2-8 record in their last 10 games.
The Nats need a sweep in the worst possible way, especially with eight games against the Phillies and Indians to finish the season. Here’s how the Nationals can help their Race for a Red October against the Marlins:
Playoff chances (via fivethirtyeight.com): 93 percent
Playoff clinching magic number: 10 (cannot win the division)
National to watch: Much of the attention has been on players in the MVP race (Anthony Rendon) or Cy Young race (Max Scherzer, Stephen Strasburg, Patrick Corbin), the team’s playoff chances likely ride on players like Austin Voth, who has given the Nats clarity in the back end of the rotation. Since returning from the Injured List, he has given up just three runs in 12 innings, with 16 strikeouts.
Marlin worth mentioning: Infielder Miguel Rojas signed a two-year extension this week, which is, remarkably, the team’s first player extension since the new owners started in 2017. Rojas is as good of a candidate as any for the honors, as he sports a .285 batting average, with 27 doubles and 12 defensive runs saved.
By the numbers: If the Nationals win any games this weekend, they will push the Marlins to 100 losses on the season, and one step closer to the National League’s worst record. They will join Baltimore and Detroit in the American League as 100-loss teams, and will likely select third in next year’s draft.
Notable quote: “That’s what happens when you play playoff-quality teams.” Max Scherzer, on the team’s struggles of late. The Nats have had a stacked September schedule, with most opponents sporting a .500-plus record, and many of them still in the playoff picture.
Series prediction: The Nats have entered do-or-die mode, and the Marlins present a needed opportunity to reset the race for October. If they fall out of the Wild Card this weekend, they are unlikely to claw back in vs. the Phillies and Indians. Right now, they control their playoff destiny, and it starts with a decisive sweep of the Marlins.
Brian Tinsman has covered D.C. sports since 2011, both from the team marketing and skeptical fan perspectives. Tweet your criticisms @Brian_Tinsman.
<div class="component component--ad-tags" data-uri="www.audacy.com/_components/ad-tags/instances/cke0e258k0