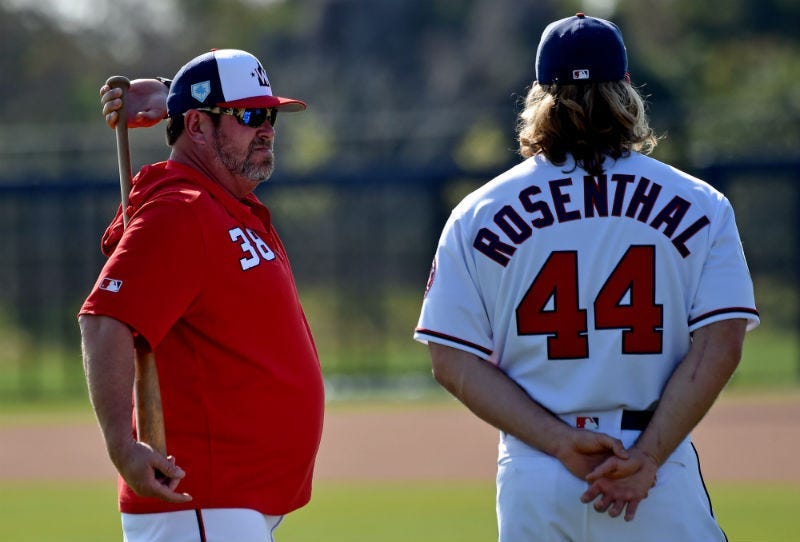 Paul Menhart, the organization's Minor League pitching coordinator since 2015, has been named Lilliquist's successor. Menhart is in his 14th season with the organization.

Lilliquist had served as the Nationals' pitching coach since the 2018 season when Dave Martinez was hired as manager. Prior to Washington, Lilliquist had been with the Cardinals since 2011, first as bullpen coach and then later as legendary pitching coach Dave Duncan's successor until 2017.

Nationals GM and President of Baseball Operations Mike Rizzo announced the decision after the game, mentioning "preparation issues" and the need for a "new message" and "new voice."

"Derek took it like a true champion," Rizzo said of delivering the news. "(He) did not agree with the assessment and the decision, and I respect that, but took it like a professional."

"Both the rotation and the bullpen, we thought that we had some flaws in there," he said. "We thought that there was preparation issues there, and we thought that we wanted to get a new message and a new voice. We felt really good about Paul's delivery, the way he feels about this organization, and his knowledge – both personally, and professionally and mechanically – of almost each and every one of our pitchers at the big leagues."

Washington's 6.02 bullpen ERA ranks last in the National League and 29th in the Majors. Its rotation ranks in the middle of the pack, 18th in the Majors with a 4.41 ERA.

"We didn't make this move in a day or weeks," Rizzo added. "This was something that Davey and myself have been keeping our finger on the pulse of."

Menhart joined the organization as pitching coach at Single-A Savannah in 2006, a role he'd go on to fill at Single-A affiliates Hagerstown (2007-08) and Potomac (2009-11), Double-A Harrisburg (2012-13) and Triple-A Syracuse (2014), before being elevated to minor league pitching coordinator.

"He probably has touched each and every Nationals pitcher that's ever hit the mound," Rizzo said. "He'll be taking over duties tomorrow at Philadelphia and we're excited for him to start his Major League pitching coach career."

Martinez, speaking next, echoed Rizzo's sentiment of wanting a new voice and a new message for the pitching staff.

"As you guys know, Derek's a good friend of mine, so this is tough," Martinez said. "It's not easy. It's kind of a somber mood, but I feel like moving forward this is the best for the team."

"Paul Menhart, who I've known now for a couple years, who I've talked to and worked with, he brings a different kind of energy," he said. "He's positive. He's a technician. He knows analytics. A lot of our pitchers here have worked with him throughout their whole minor league careers. I really feel that this is gonna be a good thing."

This is the first in-season coaching staff change the Nationals have made since Rick Eckstein was relieved as hitting coach in July 2013.