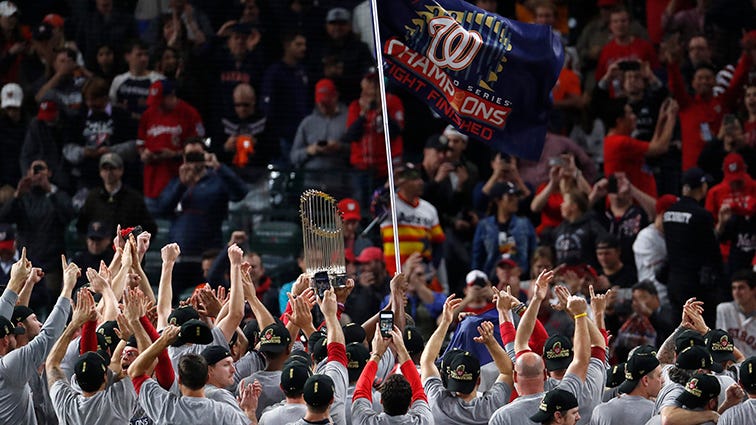 Nationals' First World Series Win Was Worth the Wait

Loserville? Take that down the road.

The Capitals broke the curse two years ago by winning the Stanley Cup championship. The Valor, whose league went kaput this week, then won the Arena Football League title. Twenty days ago, the Mystics took the WNBA flag. Now the Nationals are World Series champions.
That leaves the Wizards and Redskins to regroup. Maybe the Wiz will contend in a few years now that they have a real general manager and an amazing support system funded by Ted Leonsis. The Redskins? Well, you can’t win them all . . . or even a few it seems.
For those too young to remember the Redskins glory days of 1983-91 that were talked about daily for a generation until owner Dan Snyder finally crashed the franchise, the Nats’ championship rekindled those feelings. Everyone is town is talking about it. Saturday’s parade might hit one million people.
This glorious feeling will resonate for the rest of our lives. No matter if several key free agents soon depart, Washingtonians will always have the moment when a 19-31 team rose to win five elimination games in the fall and win four road games in the World Series. Who does that? Actually, nobody ever before.

Move aside Riggo, Sonny, Darrell and Art – there’s a new Mount Rushmore in town. OK, Ovie gets a corner, but Stephen Strasburg, Anthony Rendon, Howard Kendrick and Ryan Zimmerman have replaced the Redskins as the most popular players in town for the next generation. Oh, the old Redskins players are still memorable, but more like grandparents whose fading photos in frames force others to retell their tales. Who’s your daddy now – the Nats.

Indeed, the near 50-year grip on the nation’s capital is over for the Redskins. And don’t tell me when they win once more they’ll regain the city because the Redskins are never going to win as long as Snyder owns the team. Twenty years of rollercoasting from awful to all right is all Snyder can muster. Fans have had enough and with the Caps, Valor, Mystics and Nats showing there is a better way, the Redskins nonsense is no longer tolerated.

The Nats are now the top team in Washington even whenever returning to normalcy. Attendance will top three million fans next year while the Redskins will be lucky to get 500,000  truly in seats. Juan Soto is now more important than the Redskins quarterback – whomever that turns out to be – while Zimmerman assumes the role of elder statesman over Green.

It’s not the smell of illegal smoke turning the Navy Yard into the new Foggy Bottom changing opinions, traditions and norms. It’s winning with a likable crew that now has the Nats earning centerstage. Oh, the Caps and Mystics have their followers, but baseball is America’s game and where better than the nation’s capital to raise the banner?

Because Loserville is now located in the past.