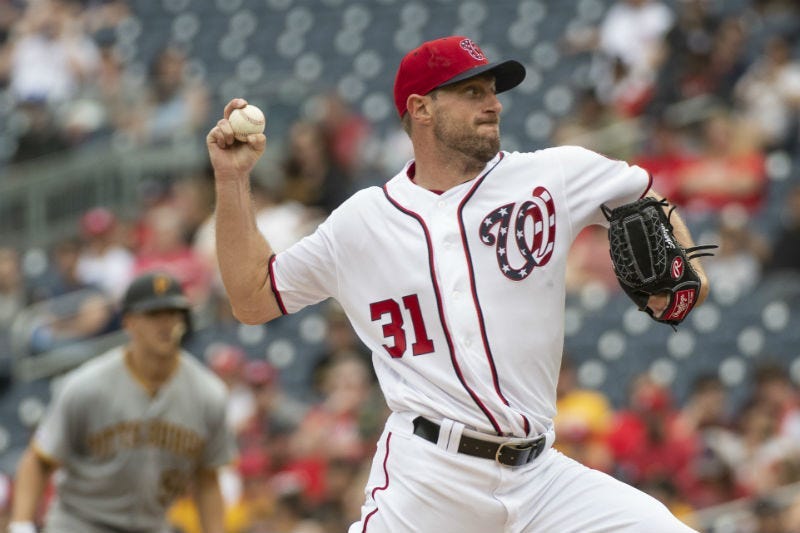 Nationals manager Davey Martinez was swiftly ejected by home plate umpire Tony Randazzo for arguing balls and strikes from the dugout in the fifth inning of Tuesday's 7-3 loss to the Giants.

Randazzo had just rung up Brian Dozier and Anthony Rendon on back-to-back called third strikes to end the fifth inning, as Washington trailed 3-1.

Nationals ace Max Scherzer weighed in with his thoughts during his weekly 106.7 The Fan appearance: On The Mound with Max Scherzer, presented by F.H. Furr.

"Everybody felt like the pitches that were called against Dozier and Rendon, I mean they're borderline pitches, but we also felt like they were also balls," Scherzer told Grant Paulsen and Danny Rouhier. "And so, it just reaches a point where you feel like, I know especially as a manager, you feel like you have to stand up for your players. Davey felt like that was the right situation for him to do that."

Scherzer was asked if pitchers generally have a good idea about an umpire's strike zone before a game.

"They have reports on everything, and they actually have reports on umpires and what their zone looks like," he said. "Honestly, how the umpires typically call the zone is basically how you execute a pitch, how the catcher receives it, the type of pitches you're throwing and those type of locations, so it's more than just a piece of paper."

"And for me as pitcher, when you're exposed to all those pitches getting called, there's times where you realize, hey look, sometimes you do get a pitch," he continued. "Like you can tell there's sometimes where you do get a strike, and then there's other times you throw a pitch and you feel like it's right there and it's a borderline call that should go your way, and it doesn't.

"And you just know that you can't get overworked by that, because there's times where you get calls and times that you don't. You just hope that for the most part that they're consistent, and for the most part, most umpires are."

While it can be frustrating for a hitter when he's getting squeezed, Scherzer did take a moment to appreciate the challenge umpires have in trying to be accurate every pitch.

"When you actually think about what their job is, I mean to track all these pitches that are coming in 95 miles per hour," he said. "They're getting them just within an inch on the plate. I mean, they have a really tough job and I respect how hard it is for it to be accurate with everybody that comes in there. So for me, I see the strike zone more as a cloud. It's more like a probability than an actual true-to-find zone."

As a pitcher, Scherzer tries not to get caught up in balls or strikes called. That's just not something he lets bother him often.

"You can never let the umpire beat you," he said. "You really would have to be throwing pitches in the zone, and you'd have to be seeing them in between innings and that they're strikes. Even from there, the catcher, the manager, they're letting the umpire know, so it's really not the job of the pitcher to really comment on the strike zone. It's just something you don't have control over.

"For me, if I don't have control over something, especially when it comes to balls or strikes, I just can't let that affect me with what I'm trying to do on the mound. Of course you're human, of course obviously you want those calls, but you can't ever let one pitch, or something that the umpire does, ever affect your next pitch."