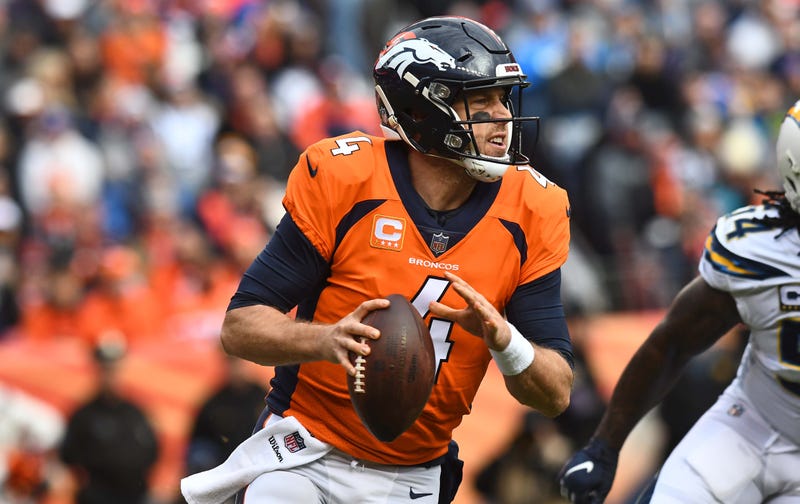 The Redskins have acquired quarterback Case Keenum in a trade with the Denver Broncos, Craig Hoffman of 106.7 The Fan confirms.

First reported by Ian Rapoport, Denver's Mike Klis came through with the brushstrokes of the deal.

Redskins get: Keenum and Denver's seventh-round pick in 2020
Broncos get: Washington's sixth-round pick in 2020
Keenum is set to earn $7 million in 2019, half of which will be paid by the Broncos. He also earns a $500,000 restructure bonus from Denver in the deal. Washington pays the remaining $3.5 million. Keenum will be a free agent in 2020.

Can confirm this is the deal.#Redskins have acquired Case Keenum. He will make the $3.5m from Washington aka that's his cap number.Will also get $4m from Denver and the teams will exchange picks in the 2020 draft. https://t.co/OXKBL5Zh0k

Denver's motive for the move is obvious: Keenum was overstock after acquiring Joe Flacco from Baltimore last month.

Keenum, 31, will have to compete with Colt McCoy for the starting job, according to Rapoport, with the winner of that competition presumably holding the seat warm for Alex Smith. Keenum completed 62.3 percent of his passes for 3,890, 18 touchdowns and threw 15 interceptions in Denver last season. The Broncos finished 6-10.

While the Redskins were heavily rumored to be interested in Cardinals QB Josh Rosen, this deal does not take them out of the running.

"It does not mean Josh Rosen's out of play. It does not," Hoffman told 106.7 The Fan's Chad Dukes. "That, to me, was a huge deal in all of this. One of the first questions I started asking as I started to talk to people is, 'Why would you do this when Rosen's out there?'

"And the response I got back is, 'Rosen's still out there.' I think it's important from that perspective to understand the timing of this deal."

"If Kyler Murray goes and does something dumb, or gets hurt, or whatever, and all of a sudden Arizona's going, 'Oh my God. We can't take him 1,' they might hang on to Josh Rosen," he continued. "And not to mention, right now they cannot get a deal that they want.

"They do not want to do this for a third-round pick; they spent a first-rounder on him last year. And if that's all teams are offering, they're going to wait. They have all the power here."

I know everyone hates everything, but there is no confusion about two things in Ashburn:1) They did not just trade for their future QB. They added depth/competition.2) They need a lot of football players at a lot of positions. That influences every decision they make.

Ultimately the Case Keenum trade comes down to this for the #RedskinsThey acquired a QB with experience to add depth to their room while giving up next to nothing and taking no options off the table.I happen to think that is smart. You can disagree, but that's what happened.

The Redskins formally announced the trade with free agency officially beginning Wednesday at 4 p.m. Interesting side note, the Redskins describe the pick they received as "an undisclosed 2020 NFL Draft pick from the Denver Broncos."

"Further conditions and terms of the deal were not disclosed," the team says.

The Broncos would announce the terms of the deal, saying in their release, "The Broncos have traded quarterback Case Keenum and a 2020 seventh-round pick to the Washington Redskins for a 2020 sixth-round pick."