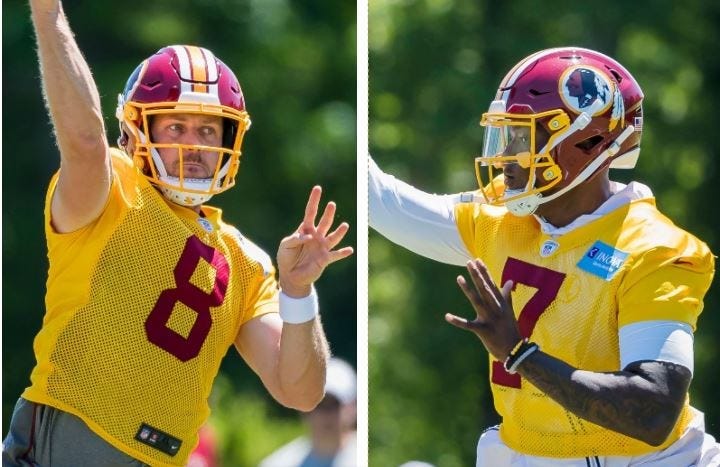 Redskins minicamp was dominated by the Trent Williams holdout saga, but on the practice fields, the quarterback competition got off to a notable start.
"Case Keenum apparently looked like a starting quarterback, and Dwayne Haskins looked like he was a good bit behind Case Keenum," Grant Paulsen said on Grant & Danny Monday.
Haskins is Washington's QB of the future, the 15th overall pick who can really "spin it." In fact, some expect Haskins to start under center for the Redskins in Week 1 this upcoming season.
But as Danny Rouhier noted, the performance at minicamp perhaps shows that Keenum is the right man to begin the season as the starting QB.

"The only thing that matters to me is what's best for the development of Dwayne Haskins," said Rouhier. "And reasonable minds can disagree about that. Some might say, 'You throw him in the mix, and you let him go through adversity, see what happens.' Some might say, 'He needs to sit and learn.'"

"But what it says to me is if he's behind a guy that's been in this league for some time, that's not crazy. That would make sense to me at this stage."

"So it tells me that maybe the best practice is to sit him for a few weeks, or half a season or God forbid the whole season," Rouhier continued. "I don't care about the team and squeezing out one more win with Case Keenum. That's irrelevant to me."

"Dwayne Haskins being excellent is what matters, because that's where this team is gonna go for the next half-decade. So that tells me ... the 'Hey, let's sit him for a few weeks' people have a good case."

Paulsen agreed that starting with Haskins as the backup will help his development as an NFL passer.

"Give him time on the sideline during NFL games, real games, to see how Case Keenum comes over and talks with (Redskins offensive coordinator) Kevin O'Connell. To see the adjustments that are made, to see the speed of the game, to see how many coverages are being called," said Paulsen.

"I'm gonna give him that time for the several weeks while I'm not starting him hopefully until Week 5 when, not coincidentally, the schedule gets considerably softer and you're gonna play some teams that are less ... difficult to move the ball against."

"I think it's important to acknowledge how far he's gotta come," Paulsen concluded. "He's a project. He's not a finished, finalized player.

"Everyone goes, 'How did he not get drafted in the top five?' He barely played in college compared to what a lot of quarterbacks do before they get drafted. I think we have to acknowledge that."