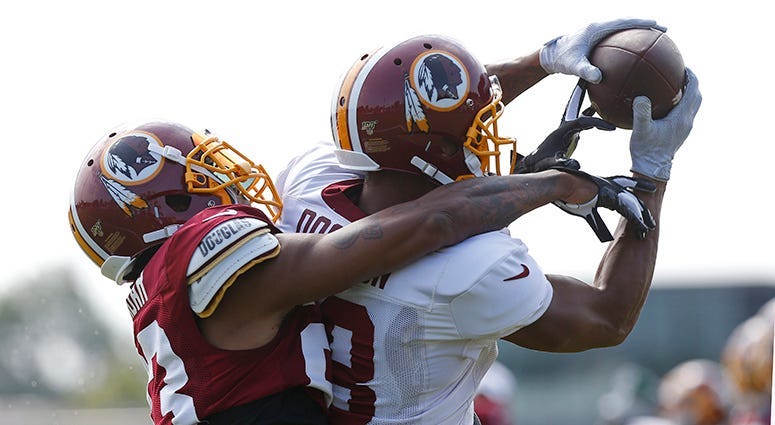 It's difficult to calculate Josh Doctson's chances of making the Redskins' 53-man roster.

The 22nd overall pick in 2016 has hardly played in the preseason. He sat out in the opener against the Browns and started against the Bengals, but only received one target in limited snaps.

Further complicating matters, Doctson has a wall of young receivers behind him, pushing for his roster spot.

Publicly, Redskins coach Jay Gruden hasn't done much to clarify Doctson's standing with the team. Here's what Gruden said Tuesday about what Doctson appearing with the first team means for the other receivers:

"He's been running with the ones the whole camp," Gruden said. "Paul (Richardson) being out has kind of put a wrench into the starting flanker spot. (Brian) Quick has been getting it a little bit. Obviously, (Kelvin) Harmon is coming on. Cam Sims is coming on. They've been pretty exciting for us. We've got a chance to look at all our receivers. Going to try and get them some touches in this game, it's going to be important. See how they block in the running game and how they do in the kickoff cover, punt cover will be very important for them."

According to JP Finlay of NBC Sports Washington – in a "Roster Watch" appearance on SiriusXM Fantasy – the Redskins have "tried to trade Doctson for two years."

Question posed to Finlay: "What about another guy from the Dallas area, Josh Doctson? I heard a reporter sort of asking Gruden about this at his availability yesterday, saying, 'What does it really say about the state of this wide receiver corps, and most specifically, what does it really say about Josh Doctson, that we're not really talking about him as a starter for this team right now?' And of course Jay Gruden quipped back and he said, 'Well, with the guys hurt – Paul Richardson hurt, Trey Quinn, etc. – we've actually had to be kind of running him out there with the first group,' but sort of kind of agreed that it's a little bit weird to say that about a former first-round pick. Has the ship completely sailed on Josh Doctson, or can any of his truthers out there have any hope to cling onto, that maybe he has some chance of turning this around and living up to the hype that he came into the NFL with?"

"Gruden can say whatever he wants," Finlay began to gather his response. "The team made a pretty big action when they didn't pick up the fifth-year option on Josh Doctson's rookie deal, so he's gonna be a free agent after this season. What I can tell you from sources, they've tried to trade Doctson for two years. They haven't been able to trade him. It wouldn't shock me if they're still trying, if there's still calls going on about that."

"And, honestly, the entire Doctson experience could happen this year," he said. "It wouldn't shock me if he was their leading wide receiver, if he went for 500-600 yards receiving. I think if Jordan Reed's healthy, he'll be the No. 1 target, certainly, but I could see Doctson getting... he's never had a 100-yard game in the NFL, so tell that to his truthers."

"The athletic ability is there, but it never all comes together," Finlay went on. "I wouldn't be shocked if Josh Doctson gets cut when they go down to 53. I don't expect it to happen, but Jay Gruden and the front office made a big proclamation when they didn't pick up that option. And so, if you don't think Doctson's going to significantly help you as a wideout, we know he's not gonna help you on special teams."

Finlay proceeded to list all the receivers ahead of Doctson on the depth chart.

"Here's who's definitely ahead of him on the wideout depth chart, is: Paul Richardson, Trey Quinn, Terry McLaurin. One-hundred percent, those guys are ahead of him," he said. "I think you could contend that Cam Sims, who's an undrafted second-year guy – that you guys have probably never even thought about – is ahead of Doctson. So when you get to the fifth, sixth, seventh wide receiver that's gonna make a team?

"I think Robert Davis has had a better camp than Doctson, and I think Davis is a special teams stud. So, if you start really kind of pushing this all the way to the end, and you need a guy that can be a gunner for you on punt team, Josh Doctson's never gonna do that! It wouldn't shock me if he gets released."

Where does that leave us? If the Redskins have indeed shopped Doctson in the past, then that doesn't necessarily speak highly of their hope for him to break out in Year 4. That would seem to jibe with their decision to not pick up Doctson's fifth-year option in May. It also might explain their decision just days earlier to take two receivers – in McLaurin (3rd round) and Harmon (6th) – in the draft.

None of that adds up to an optimistic picture for Doctson.