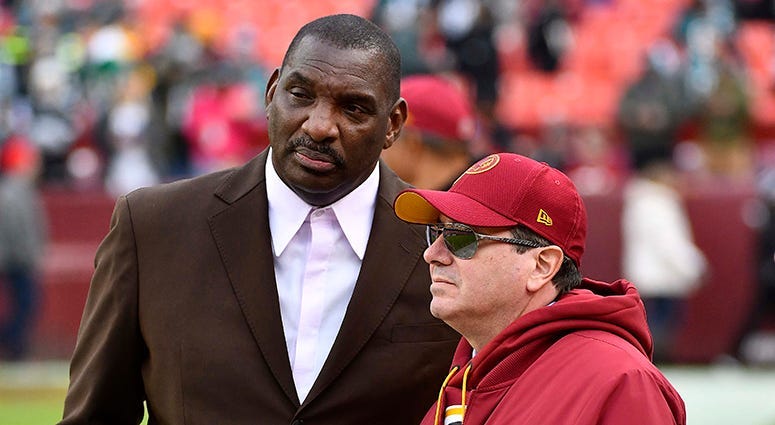 The Redskins have named former Panthers executive Rob Rogers as their new Senior Vice President of Football Administration and announced a new role for Doug Williams.

Rogers joins the Redskins after 25 seasons in Carolina, where he most recently served as executive director of player finance and football research, a promotion he earned in May 2019.

"Rob Rogers is a skilled NFL executive who brings many years of valuable experience in contract negotiation and salary cap management to our front office," said Redskins owner Dan Snyder in a press release announcing the hire. "He has a great working relationship with Coach Rivera and we look forward to his contributions to the Redskins."

"Rob was a tremendous resource for me over the past nine seasons, and I'm excited for him to be an integral part of building something special here with the Redskins," Redskins head coach Ron Rivera said.

106.7 The Fan's Craig Hoffman has confirmed Rogers will report directly to Rivera.

"Doug Williams is a legend within the Redskins franchise," Snyder said. "He is excited about this new role and in working with Coach Rivera. Doug is one of the most respected men in our building and I know that he will have an immediate impact on our players."

"I've had a chance to talk at length with Doug Williams since my arrival and he is ready to take on this new role," Rivera said. "We want to create an atmosphere that is all about the players. Doug will be an invaluable asset in player development in making sure that all of our players have the guidance and resources needed to be successful on and off the field."

Still working on getting exactly the new description for Doug but the important thing is he’s no longer in charge of personnel.That will be a new person hired likely after the draft. For the meantime, Kyle Smith and Alex Santos are over college and pro depts. https://t.co/RK63lkUIYj

Rogers assumes a role that is similar in nature to outgoing Senior VP of Football Operations/General Counsel Eric Schaffer, who parted ways with the organization on Thursday after 17 seasons. Schaffer, who had been with the Redskins since 2003, was promoted to Vice President of Football Administration in 2007.

As executive director of player finance and football research with the Panthers, the Redskins note Rogers "worked closely with the Panthers general manager on the development of player budget parameters, roster management, contract proposals, negotiation strategies and salary cap management."

"He also oversaw the Panthers football analytics department and worked on research and analysis of player contracts and statistics," the Redskins add. "He directly conducted the majority of contract negotiations with player representatives during his time in this role."

Rogers first joined the Panthers in their inaugural 1995 season, working as a quality control assistant along with assisting the in-house analytics team. He graduated from Harvard with a degree in government in 1993.

The Redskins also announced that the organization and Schaffer have "mutually parted ways."

"I want to thank Eric Schaffer for his work and contributions over the past 17 years," Snyder said. "He was dedicated to the team and the organization and we wish him all the best."

"I want to express my sincere gratitude to Dan Snyder for bringing me into the NFL and allowing me to be a Washington Redskin for the past 17 seasons," Schaffer said. "It was a privilege serving this historic franchise as both Senior Vice President of Football Operations and General Counsel and a blessing to have worked with so many incredible people.

"While I will miss the players, my friends, colleagues, and the tremendous Washington Redskins' fans, my family and I are excited for our next chapter."