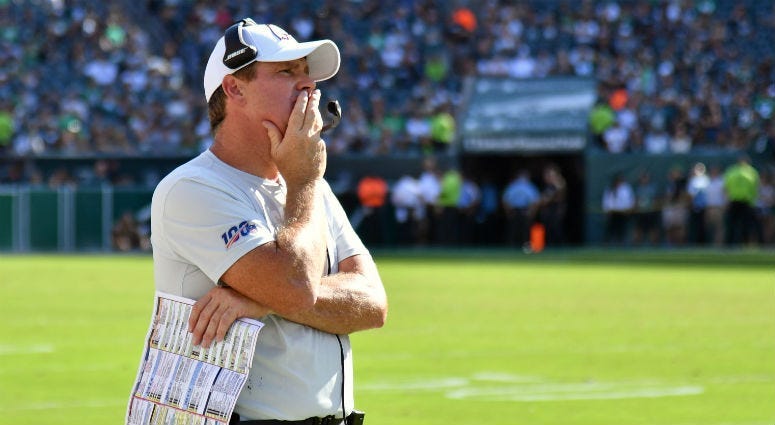 The first half was oh so good. The third quarter was an unmitigated disaster. The fourth was only slightly better.

The Washington Redskins showed promise before things went horribly wrong in the second half of a 32-27 loss to the Philadelphia Eagles Sunday.
1 — The Redskins were without three of their best players, if not their actual three best players for the last half of that game. Tight end Jordan Reed (injured) and left tackle Trent Williams (holdout) didn't start the game, and Jon Allen didn't finish it. The margins are small for the Redskins. Having good players matters.

The Eagles started their comeback by running the ball right up the gut time after time on their opening drive of the second half. It's hard to believe that happens if Allen was in the game.

The disappointment of blowing a 17-0 lead should be real. It's a major missed opportunity on the road against a division opponent, but let's not pretend like everything was awful and this team isn't going to compete and win some games. Terry McLaurin's good was real. There's only so much you can do with 4.3 speed defensively, as the Eagles reminded the Redskins with DeSean Jackson again and again and again.

With the margin of error that small, it's imperative to play clean. The Redskins had 11 penalties. It's one of the things that killed them last year. It slaughtered them on Sunday.

2 — If you want to make the case that first half was false hope, you could. Case Keenum was literally better than he had ever been in the first half. The 268 yards he threw for were a career-high for a half. The 147 yards of net offense in the first quarter was more than the Redskins have had in a first quarter since Christmas Eve 2016.
Vernon Davis' 48-yard touchdown was absolutely incredible, but let's not pretend there wasn't some luck involved. Davis hurdled a defender and then somehow slipped out of two more before scampering for the score. That's not exactly sustainable.

Getting lucky is fine in the short term, but being good is how teams win games in the NFL. The Redskins flipped their formula today and it just didn't hold. They saw the running game wasn't working and did a good job play-calling, trying to go to the air in the second half.

However, in a game of execution – on a critical drive in the third quarter where the Skins had a chance to stop Philly's momentum – Keenum overthrew McLaurin for what would have been another long touchdown, and then Paul Richardson dropped a slant that would've gotten them moving with a first down.

Meanwhile on defense, it was a story of miscommunication again in the secondary. "When (Jackson) is on the field, you'd wanna err on the side of covering him," Gruden said of the blown coverage that let the one-time Redskin free. Multiple secondary players confirmed it was a late check that didn't make it all the way out to Josh Norman.

Norman was in the original man coverage call. The call was changed to a Cover 3 zone, which would have put him right where Jackson wound up running open instead of leaving two players for Montae Nicholson to try and cover.

It's not anyone's 'fault,' in the sense that you can't blame Norman for missing something so late before the snap. It's a strategic error to try and flip the coverage at that point. If it's gonna happen, it's gotta be communicated better. Failure when a player like Jackson is in the middle of it is going to result in touchdowns time and time again.

3 — The biggest disappointment, though, for Washington on Sunday was the pass rush. It was completely non-existent. The only sack came from Cassanova McKinzy, who tackled Carson Wentz on a scramble just behind the line of scrimmage. It wasn't really even a sack. They had a whopping four pressures on the day, which is part of the reason they produced zero turnovers.

When asked about what they could do to get more pressure, Gruden said, simply, "rush better." It's a game of execution. There are things they can do schematically, which Gruden also pointed to, not to take it completely out of his staff's hands, but no matter what the call is, the players need to execute it at a higher level.

The defense wasn't all bad, and it definitely was worse in a second half where the Redskins got absolutely smoked in time of possession. One side of the ball affects the other. Washington had zero first downs rushing. They ran just 10 plays in the second half before the final drive, while the Eagles ran 42 in that span.

Stat of the day: McLaurin ran 21.23 mph on his 69-yard touchdown reception, per NFL NextGen stats. That kind of speed changes games. Related: Jackson ran 21.4 mph on his 51-yard score.
Quote of the day: "We didn't have the ball," Gruden quickly quipped when asked about the Eagles' comeback on his team. While clearly his frustration is always going to be viewed through the offensive lens in that the defense failed 'his' side of the ball, he pointed to the offense's inability to sustain drives, too. "It was a total team loss."

Pretty much sums it up.