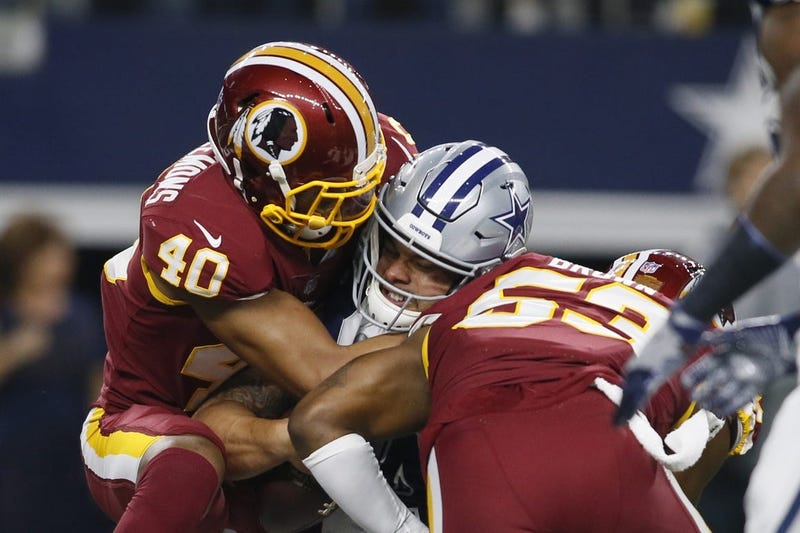 Redskins linebacker Zach Brown is baffled by the NFL's new tackling rule, which penalizes players for lowering their heads to initiate and make contact with their helmets onto an opponent.

"They want you to lean more with your face mask/shoulders," Brown explained to 106.7 The Fan's Grant & Danny. "But when you're going fast, stuff's going to happen. You can't prevent a lot of hits. Like 100 percent of the tackles in the NFL, guys are going to lower their heads, so you might as well get ready to fire everybody that plays defense.

"It just seems like they don't want us to play defense no more because offensive guys are complaining about being hit. You know what you signed up for, so don't come out here if you're (going to) complain about being hit. "

Brown warns of the unintended consequence of the new rule, demonstrating how it forces a defender to bow his neck back in order to avoid lowering the head.

The new rule – approved by NFL owners in March – even reads quite confusing: "It is a foul if a player lowers his head to initiate and make contact with his helmet against an opponent. Contact does not have to be to an opponent's head or neck area – lowering the head and initiating contact to an opponent's torso, hips, and lower body, is also a foul. Violations of the rule will be easier to see and officiate when they occur in open space – as opposed to close line play – but this rule applies anywhere on the field at any time.​

Penalties for lowering the head include a loss of 15 yards, an automatic first down (if foul is committed by the defense), and, under the following conditions, ejection:

Enough players were confused by the rule that the league had to distribute a fact sheet on Wednesday. A fact sheet. And players are expected to remember all this in the heat of battle?

"You don't understand," Brown said. "Like, as a linebacker, if you do 10 tackles and they fine you eight out of 10, that's ridiculous. The NFL's just making stuff up nowadays. Like, 'Oh, here you go. Linebackers can't lower their heads anymore when they hit.' Alright. Y'all have yet to fine a running back that lowers their head when they come through the hole. They do it. I be sitting there so mad."

"Nobody got fined last year," he said, "but I know Alfred Morris runs with his head down like that when he comes through the hole."

Brown hopes the change is just another rule the league hardly enforces.

"What they're talking about is something that everybody does," he stressed.

"They're making it easier for the offense because they're getting hit too hard," he said. "Well, too bad. The game's been like this forever. So they're changing it to make it better for y'all, to make it high-scoring, make it more electrifying. I mean, I think the scores went up a lot ever since the little rule came in that we can't touch the receivers downfield. So they make it harder for the D-backs, now they're putting in this for the linebackers. "