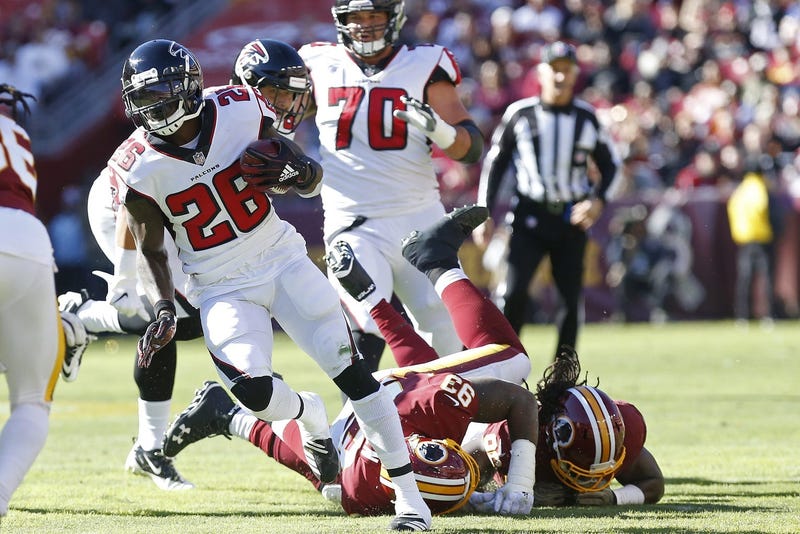 The Redskins were vocal about the officiating crew after being penalized 10 times for 147 yards in Sunday's 38-14 loss to Atlanta, in which the Falcons were penalized seven times for 50 yards.

"Hey, man, you can't beat the zebras and the team," linebacker Zach Brown said. Brown also said the refs "should get fined just like we get fined."

Zach Brown was among a few Redskins who were upset with the officiating. When asked if he felt Atlanta got away with some pick plays in the first half, Brown said, "Oh, man you can say that. They're gonna go back to the league and say, 'Oh we should... https://t.co/9Cx3EB9N9c

D.J. Swearinger put the emphasis on players executing better, but did admit some of the penalties were "bulls***."

"I felt like it was definitely a little staged," he said. "On some of them penalties, that could have definitely went either or."

"We can't even put that in the ref's hands," he added. "We've got to execute regardless of the situation."

DJ Swearinger was not pleased with the refs in Week 9. And he wasn't the only Redskin to take that stance.MORE REACTION: https://t.co/gN3QltXFr1 pic.twitter.com/Os5yYJgPyv

"We just want the game to be called clean," said running back Kapri Bibbs. "And we want to be able to just go out there and put our best foot forward, knowing that we're going to get the guys giving their best effort as well. I'm talking about the zebras."

"You know, I gotta check the tape out, see what these penalties are all about," he said. "But, I don't know. It's very frustrating. They called a couple token penalties on them late, but I gotta look at the tape. If they're legit, we gotta get it corrected."

Santana Moss has long believed NFL officials bring an inherent bias against the Redskins into games. Moss attended Sunday's game in person, so he didn't see any instances to support this as he might have if he were watching it on television, but he did say he's noticed a lack of calls going the Redskins' way "throughout this year."
"Kerrigan – I mean they've been holding him the entire year," Moss said during his weekly 106.7 The Fan appearance with Chad Dukes, presented by Paul Henry's Windows.
"I'm not sure if he's not showing it enough, flopping enough," Moss said. "Because you see other teams, those guys will flop and they will throw their hands in the air, but he never gets it. And the refs will be sitting right there. There's a ref that's literally sitting right on Kerrigan's side, right behind the offensive line, and he looks right at him, and he's looking and never calls it."

"It's just one of those things," he said. "I mean, it's nothing new to me. It's never new hearing it and then now now hearing other guys speak up on it.

"But one of the things I've always said, it's easy to point that out when you lose, and they've been having some wins and it's been going on. You just gotta go out there and know that it's not going to be going your way, it's not going to be called your way, and do the best you can to not be in those situations to have to lean on those guys, because they're not going to be there to lift you up."