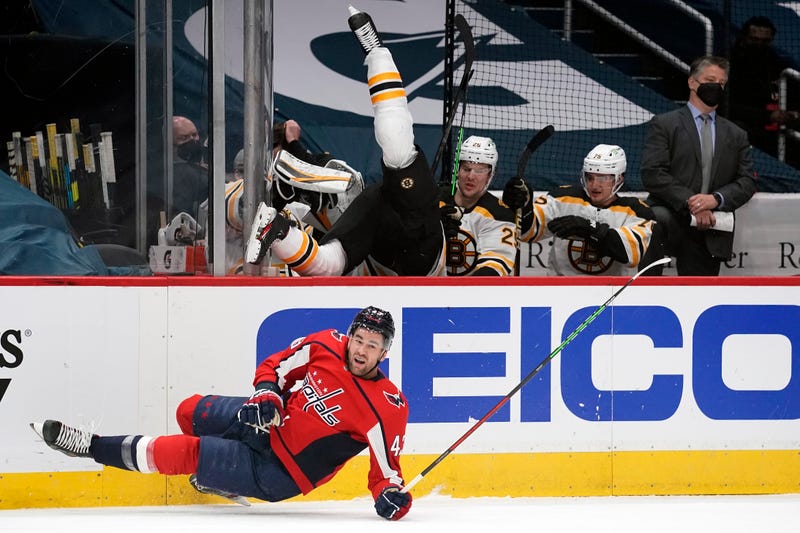 Tom Wilson lays a monster hit on Curtis Lazar six minutes into the first period of Game 2, sending him crashing over the boards and into his own bench. Photo credit Patrick McDermott/NHLI via Getty Images
By Chris Lingebach and The Sports Junkies

The Capitals may not have come away with the win Monday night, falling to Boston on a Brad Marchand goal 39 seconds into overtime — evening the series at one game apiece — but there was plenty of scrappy play to admire that could bode well for Washington deep into the series.

From the opening puck drop, both Washington and Boston were trying to set the tone, delivering big hits all over the rink.

This hit from Tom Wilson — roughly six minutes into the first period — in which he launched Bruins center Curtis Lazar over the boards into his own bench, is worthy of a second (and third, and fourth) look.

Tom Wilson just told Curtis Lazar that his shift was over. #ItsOn pic.twitter.com/GXqQ4WJyUY

The Sports Junkies took a moment of their own Tuesday morning to reflect on the action-packed first period.

"That first period was just so fun to watch," said Jason Bishop. "Even though Boston had the lead. They took the lead 1-0 and 2-1, didn't they?"

"But it was chippy. It was physical," Bishop continued. "There were scrums everywhere."

"I mean Willy launched the dude right into the Boston bench," Auville noted.

"Willy hit some guy and he went like four rows into the stands," said Bishop.

"I mean he started on the other side of the ice," said John-Paul Flaim. "He was tracking that guy from one side of the rink to the other."

"I mean it was a thing of beauty," said Auville. "It was fantastic to see in person."

The scrappy play continued all the way through the final whistle of the first period.

It was around that time that Caps winger Conor Sheary earned The Junkies' respect, tangling with Bruins defenseman Mike Reilly behind Boston's net. Both players were whistled for roughing in the closing 10 seconds.

"And then Sheary's getting into it with some donk behind the net, when the puck's on the other side of the ice," Bishop said.

"Yeah, they were scrapping," Auville said. "And Sheary's small. Like, he's tiny."

"He kind of took him down, too," Eric Bickel pointed out. "He started on the bottom and then he ended up on top."

"He's like the Tasmanian Devil," said Auville. "He's gonna get in there and scrap with you."

The first-round series heads to Boston next, tied 1-1. Puck drop is scheduled for Wednesday at 6:30 p.m.