Chris Simms has delivered a scalding take that seems to defy all statistical measurement coming off the weekend's divisional round of the NFL Playoffs.

The Eagles buried the Giants' season on Saturday with a 38-7 victory that will send Philadelphia to the NFC Championship Game for the first time since their Super Bowl-winning season five years ago.

Philly quarterback Jalen Hurts lit up the scoreboard with two touchdowns through the air and one on the ground while throwing no interceptions. Conversely, Daniel Jones struggled to generate scoring and finished the day with no touchdowns and one INT.

In steps Simms, who was asked this week if both teams were to switch quarterbacks, how much would the Eagles beat the Giants by.

"I don't think it's a whole lot different, because Daniel Jones is going to be able to do the same thing," Simms said. "I mean he can do some of the things that Jalen Hurts [can]."

"Yeah, maybe not as good a runner, but we know he's really close. It's not like, 'Oh, whoa... way better,'" he said. "Again, if you're gonna ask me who I'd rather have as a passer, I'd rather have Daniel Jones. I'm sorry about that. You're gonna get me in trouble today."

106.7 The Fan's Brian Mitchell offered his unique perspective, as someone who's played for both the Eagles and Giants (and won a Super Bowl in Washington).

"We both like Chris. We both respect him," Mitchell told co-host JP Finlay. "But I think Chris likes to go way out there sometimes just to be different than everybody else. Because I look at the passing this year, I don't think Daniel Jones was a better passer than Jalen Hurts."

"You have to say Hurts has way better weapons in Brown and DeVonta Smith," Finlay noted. "The Giants really had no weapons. I'm not buying it, dude."

"I love when people want to try and justify their cause for a quarterback and they forget about it. Bring in the running stuff as well and then put the Eagles where they placed," Mitchell said. "That's because when Jalen Hurts is on the field, he commands a different attention than Daniel Jones does."

"Statistically — and again, I would take Hurts 100 times out of 100 — there's a big difference because Hurts has done this consistently," said Finlay. "Hurts has gone over 700 yards rushing both of the past two years, with double-digit touchdowns both of the past two years. But this past year with the new Daboll offense, Jones did go for 700 yards rushing with seven touchdowns. Statistically, they are closer than you think. Hurts has been good and made tremendous progress throughout his time as a starter, which is really only his second season. I don't think you could say the same for Jones."

BMitch: "Jones is in what season right now?"

Finlay: "He just finished his fourth."

Finlay: "He's in his third but he barely played his first season."

"I'm just saying, one thing about pro football, it's not, 'Well, if I put this person... If I...' That doesn't automatically mean that it's gonna happen that way," said Mitchell. "Daniel Jones is not playing with college players; he's playing with pro players, right? I mean Jalen Hurts can't help the fact that he caught up to his offense and went past where they thought he was gonna be sooner than they expected him to be."

"I've watched both these guys a lot," said Finlay. "I don't get saying definitively that Jones is a better passer than Hurts."

"No, I don't get that at all," Mitchell agreed, adding, "I don't think he's a much better passer. And you watch how Jalen is doing things, Jalen seems so under control in everything he does. Jones, although he has drastically improved this year, does not seem very under control to me a lot of times. It seems like he's a little nervous about stuff."

Giants fans can take that debate into the offseason where they'll meet sympathetic Cowboys and Commanders fans, all of whom will be watching the Eagles – and Hurts – play on. 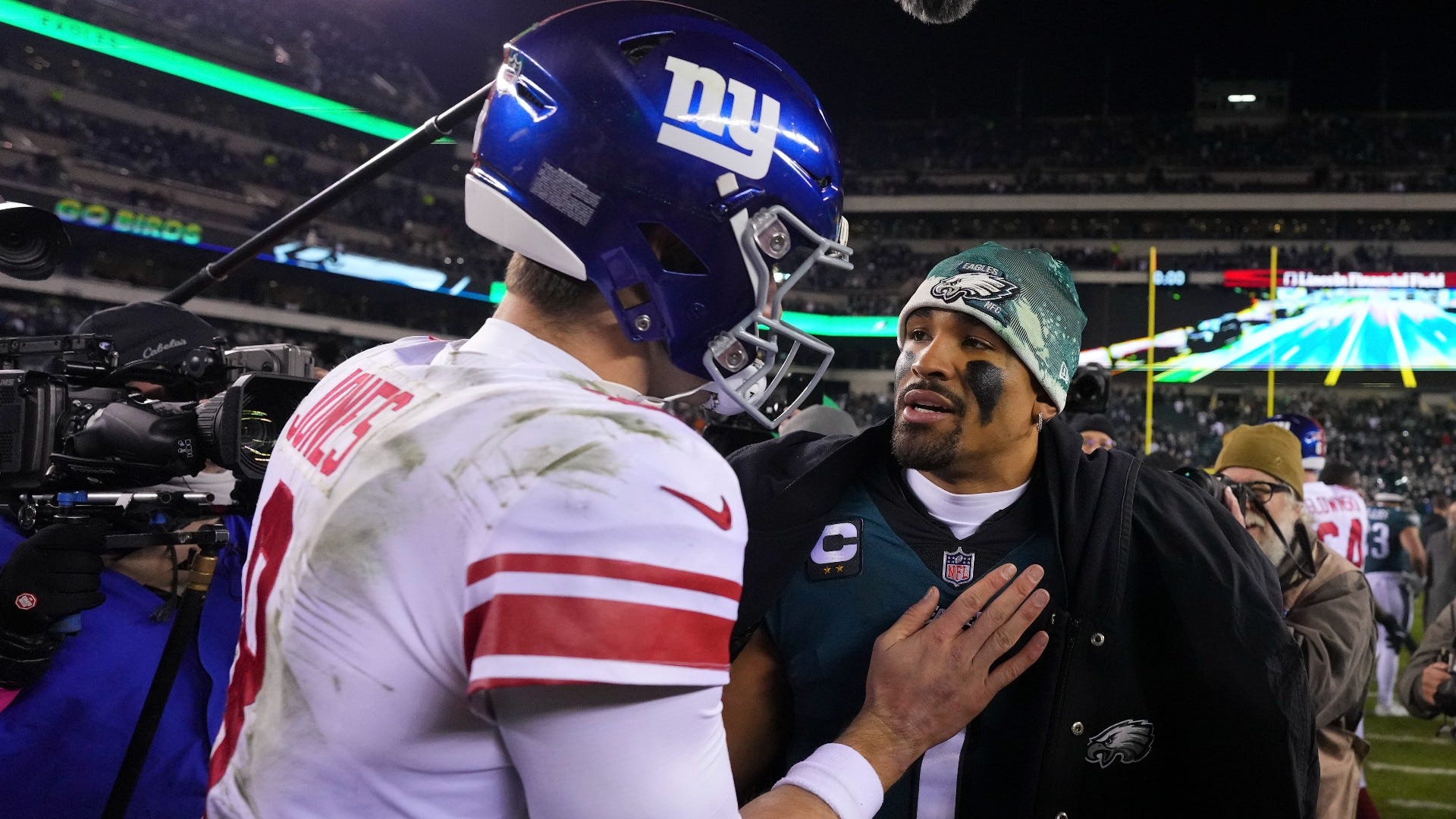