Justin Fields appeared to take a bit of a step forward on Sunday. The Chicago Bears quarterback went 11-for-22 for 174 yards and picked up 52 yards on seven carries. He didn’t turn the ball over for the first time this season.

Those completions, attempts, and yards were all season-highs for Fields. In fact, his 174 yards against the Giants nearly matched his 176 yards over the previous two weeks. Still, it was ultimately a loss for the Bears and while Fields showed some flashes, there was also a lot of room for improvement.

David Haugh and Dan Wiederer of the Audacy Original Podcast “Take The North” aren’t so sure of Fields’ “progress” and discussed what they saw out of the young quarterback.

“It’s being hailed a little bit too universally for my taste – a little too much of a consensus – that this was progress and easy to see because maybe I’m not seeing the same things a lot of analysts are,” Haugh said (2:25 in player above). “I don’t know if we can just say total progress. There was a lot to like, maybe, but there was a lot to be concerned about.”

“As a golfer, I will tell you that if I make three triple bogeys and I come back on the fourth hole and I make a double bogey it might be progress, but my round’s not back on track,” Wiederer replied. “So let’s get it straight here. Let’s make sure we clarify what we’re talking about as far as progress. You cannot be excited about what happened on Sunday afternoon.

Wiederer’s defining moment for Fields in Week 4 came with 3:11 left in 1st half. While Fields was able to scramble for a first down, Darnell Mooney was open down the field for a potential touchdown.

“Justin Fields has the cleanest pocket he saw all day. The protection held up perfectly. Mooney takes advantage of a coverage bust and runs right up the seam and there's a 35-yard touchdown pass just sitting on the table for the Bears. It’s a grooved fastball right over the middle of the plate, Justin’s just got to swing and put that thing in the bleachers like he did at Wrigley Field over the summer on the field trip. And he decides not to for whatever reason. Is it because he’s uncomfortable back there? Is it because he’s anticipating pressure? He drops his eyes, he takes off running through a clean pocket, and ultimately, David, he picks up 12 yards. And it’s a 3rd-and-10 conversion with a scramble run. And this is why I’ve said for a while now that we have to make sure that we separate play results from play processes and decision-making. And it was a prime example of Justin making a play that moved the chains and kept the Bears in scoring range, but also left a huge home run on the table.”

Mooney admitted that he ran a slightly different route than what was designed, but the opportunity was still there for Fields.

Here's the play where Mooney (No. 3 to the bottom) comes open down the seam. Both Mooney and Eberflus said the route was supposed to bend across the formation. Still, Eberflus acknowledged that Fields had time to ride the pocket and get his eyes downfield to Mooney. pic.twitter.com/gughobQE0t

Head coach Matt Eberflus said on Monday that Fields could’ve ridden the pocket more on that play, and while Fields ultimately got the first down using his legs, even the end of the play wasn’t ideal.

“Even worse than all that, David, at the end of the scramble he ran into a hit. He had an opportunity at the end of a run to get out to the right, get the first down, get out of bounds and save his body from another hit, and he took a hit at the end of it,” Wiederer said. “So there were about four things wrong in the decision-making and the execution and everything that Justin did there that we have to put the magnifying glass on.”

Haugh then brought up a sack that Fields took early in the game. With the Bears in the red zone, Fields took a two-yard sack rather than hitting Cole Kmet or simply throwing the ball away.

It's going to be the Luke Getsy apology tour today. Guys just didn't execute all around. OL didn't block, WRs didn't get open. Justin Fields played better but still far from where he needs to be. He had Kmet open here & instead takes the sack (Anyone else's All22 strobing?) pic.twitter.com/Sy2t4FO5dE

He didn’t read the moment and that led to Khalil Herbert rushing up the middle on second and third down, showing that Eberflus may not have the most confidence in Fields.

“It’s second-and-12 because you took a sack you didn’t need to take. Get rid of the football. Move the chains. Take the gimme,” Haugh said. “Yeah, there were six sacks. Yes, there were 34 passes called. How many runs were tuck and runs where you didn’t need to be? How many sacks were responsible because he held onto the ball too long? I don’t want to pick on the kid, I think you have something to work with, I’m just saying right now, right now I’m straining to see the progress that other people are celebrating.” 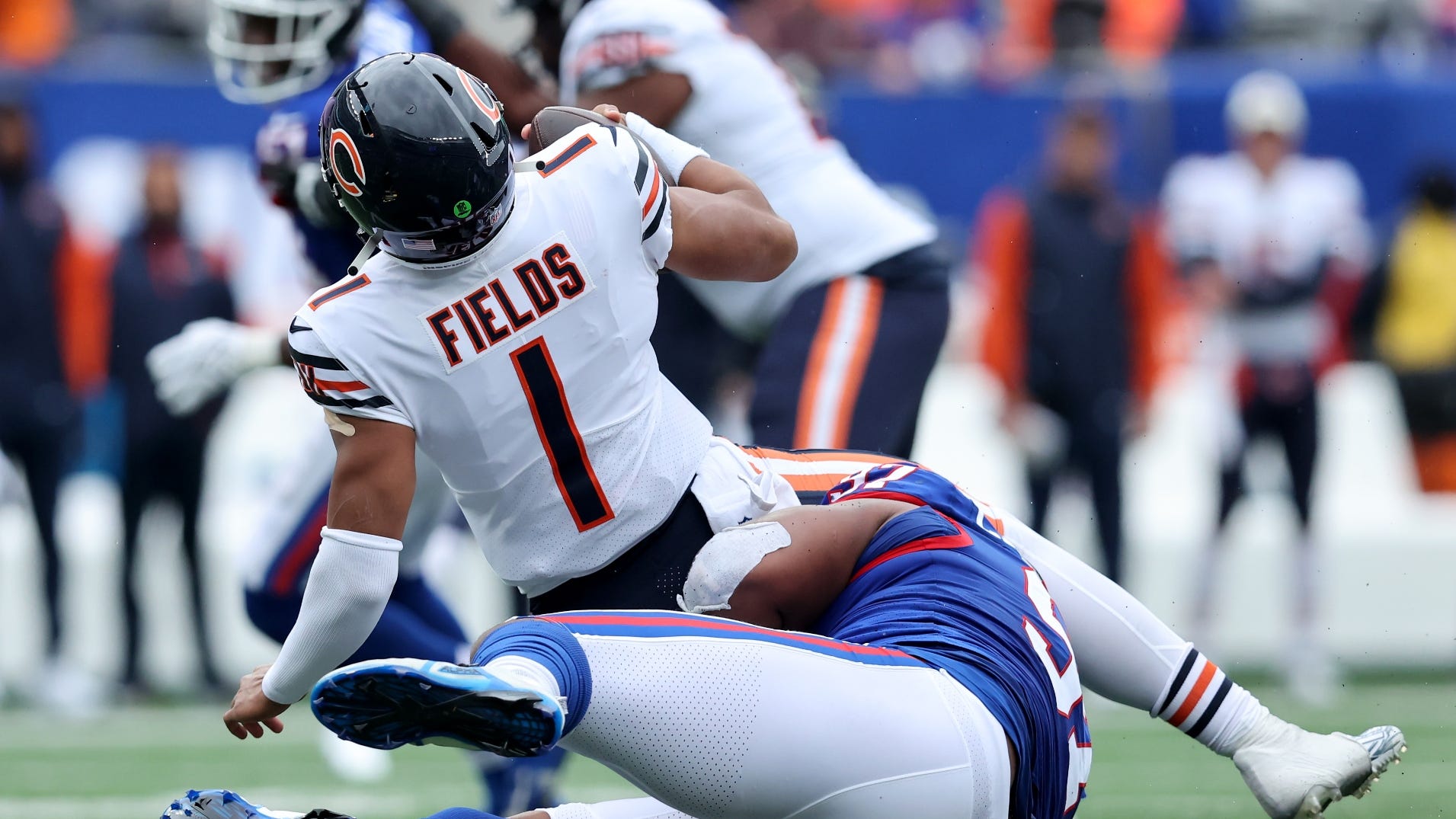