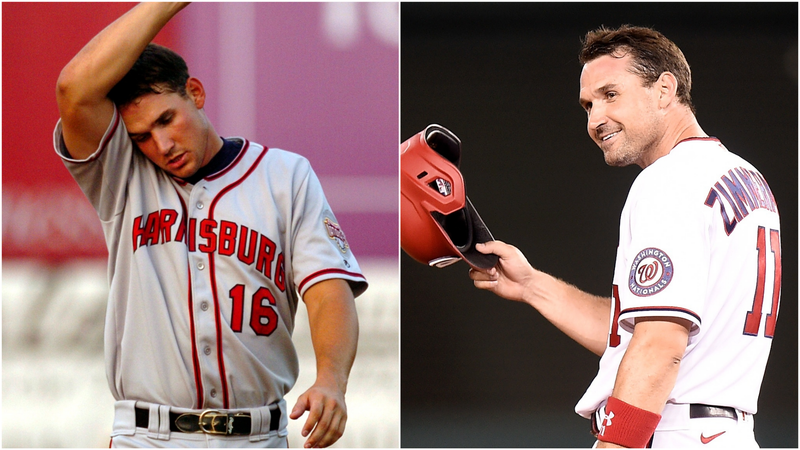 One of the lingering questions after the Nationals' shocking sell-off last week is how long will it be before the club is ready to contend again.

In total, the Nationals traded away eight big league players ahead of last Friday's trade deadline in exchange for 12 prospects, sacrificing the present for a more sustainable future by replenishing their farm system with young, controllable talent.

Nobody in the organization is more familiar with what it's like to play for a rebuilding team than Ryan Zimmerman, whose time with the organization — as the Nationals' first-ever draft selection and a member of their inaugural 2005 roster — predates even general manager Mike Rizzo, who joined the club in July 2006.

In his first seven big league seasons, Zimmerman was a part of exactly zero winning teams in Washington. The closest they'd come to success in that span was 81-81, in that inaugural season (although they still finished in last place in the division). And then the 2012 Nationals exploded onto the scene with 98 wins.

"I've been in plenty of dugouts in the Nationals team that don't have any players like Trea or Max on it, too, so I've been there before. Not in this way. I didn't get there in this way, obviously," Zimmerman told The Sports Junkies during his weekly segment, presented by MainStreet Bank.

"Nobody likes to see great players and great people [go], people that have been here and obviously you win a World Series in 2019," he said. "For a group of guys that have done so much for the organization and so much for the city, so much for baseball, it's obviously not gonna be fun or enjoyable, I guess. But all those guys besides Trea were gonna become free agents at the end of the year."

"Because we've been so good for so long," he said, "every trade deadline literally for the last nine or 10 years, we've kind of been trading away people to get people, to give ourselves a better chance to either make the playoffs or do better in the playoffs, so our minor league system got completely depleted. So you had to kind of do something like this, and it just kind of worked out that all of those guys were on expiring contracts."

"Obviously the Trea one is different and it kind of hurts a little bit," Zimmerman noted. "He was gonna be here for one more year, and me or you, nobody knows what those talks were like, if they didn't think they had a chance to sign him long term or something like that. I mean those are decisions that are made kind of above where we are."

"But for the most part I think Rizz and those guys kind of did what they had to do," he said. "We got 12 guys back. If three or four of those guys become decent big league players, then you've done a pretty good job."

Still, the question remains as to whether the Nationals are looking at a long-term rebuild that could take three to four years, or more of a quicker turnaround, a retooling that could be complete in one to two offseasons. Sometimes, sustained losing is the surest route to sustained winning. After all, the Montreal Expos losing 95 games in 2004 is how Zimmerman, now 36, wound up in Washington as a fresh-faced 20-year-old in the first place. Even still, Zimmerman thinks the Nats are looking at more of a retooling.

"We're still not that far away," he said. "I mean you look, you've got [Stephen] Strasburg coming back from this, and a lot of people laugh at that but I would highly doubt that I've seen Stephen Strasburg on a big-league mound for the last time."

Strasburg recently underwent surgery for thoracic outlet syndrome, a compression issue with the nerves in his throwing arm that has a track record of recovery that's shaky, at best.

"I just know what that guy's like, I know how hard he works," Zimmerman said. "I think he's gonna come back from this and try and prove people wrong."

"And we still have [Patrick] Corbin, who's gotten better as the year's gone on," he continued. "Joe Ross and Erick Fedde are continuing to mature and become good pitchers. And then you've got all the young kids down in the minor leagues, and JoJo Gray has been really good. So, we'll see what we do. It's different and it's, when you won the World Series in 2019, it's tough, but something had to be done."