It’s not a surprise that Mike Trout is the overwhelming favorite in the betting odds to win this year’s American League MVP. The Los Angeles Angels' centerfielder opened with +200 odds at DraftKings Sportsbook to take home the award for the fourth time.

Houston Astros third baseman Alex Bregman comes in next on the list behind Trout at +1000 odds. Aaron Judge is third in the running at +1200. Also coming in with longer odds are Boston Red Sox third baseman Rafael Devers and Toronto Blue Jays outfielder George Springer, tied at +3000. 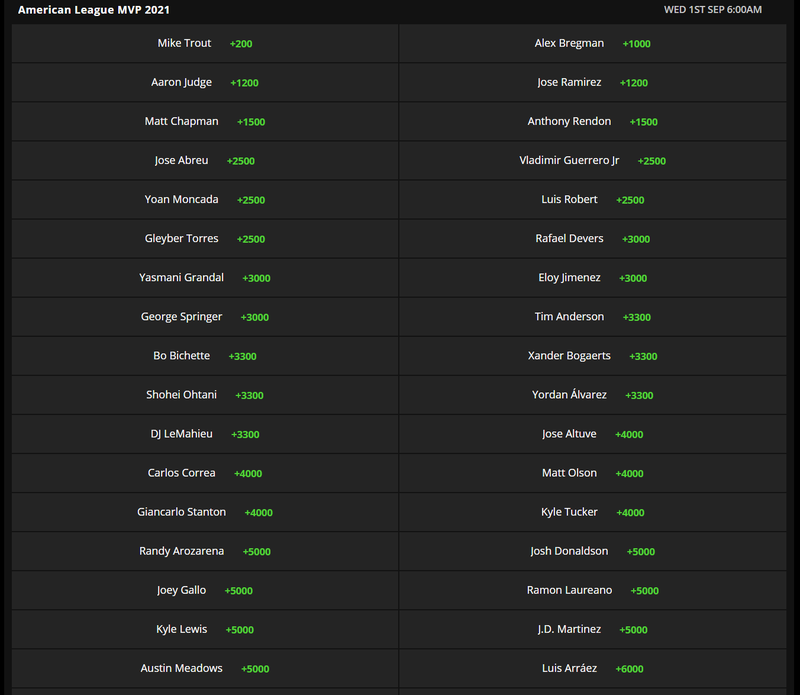 Bregman has been dealing with a hamstring injury but said last week he is hoping to play the full 162-game season. His MVP odds are something to keep an eye on as he works through this injury.

But Trout, who already has three AL MVP awards on his shelf, is good to go for the Angels. He is gearing up for his eleventh season in the league at just 29 years old. If Bregman can get healthy he might have a chance to catch up to Trout in these odds. But, it looks like Trout is in a league of his own here heading into the 2021 MLB season.

Lucy is a sports betting content producer with Radio.com and BetQL. She has worked with WEEI and Radio.com as a writer, radio producer and podcaster. Lucy lives in Boston and loves Tom Brady and prop bets. ​Follow Lucy on Twitter at @LucilleBurdge.