Mookie Betts is one of MLB’s biggest stars, so it’s no surprise he’s currently the betting favorite to win the National League MVP this season. The betting odds for the Los Angeles Dodgers right fielder to win the award are currently +750 (odds courtesy of DraftKings Sportsbook) and spring training has only just begun.

Washington Nationals outfielder Juan Soto is tied with Betts at +750 to win the award, followed by Dodgers first baseman Cody Bellinger at +800. Phillies right fielder Bryce Harper’s odds are a bit longer at +1500. Mets first baseman Pete Alonso, who is favored to lead the league in home runs, comes in lower on the list at +3300. Last year’s winner, Atlanta Braves first baseman Freddie Freeman, has +1200 odds to repeat. 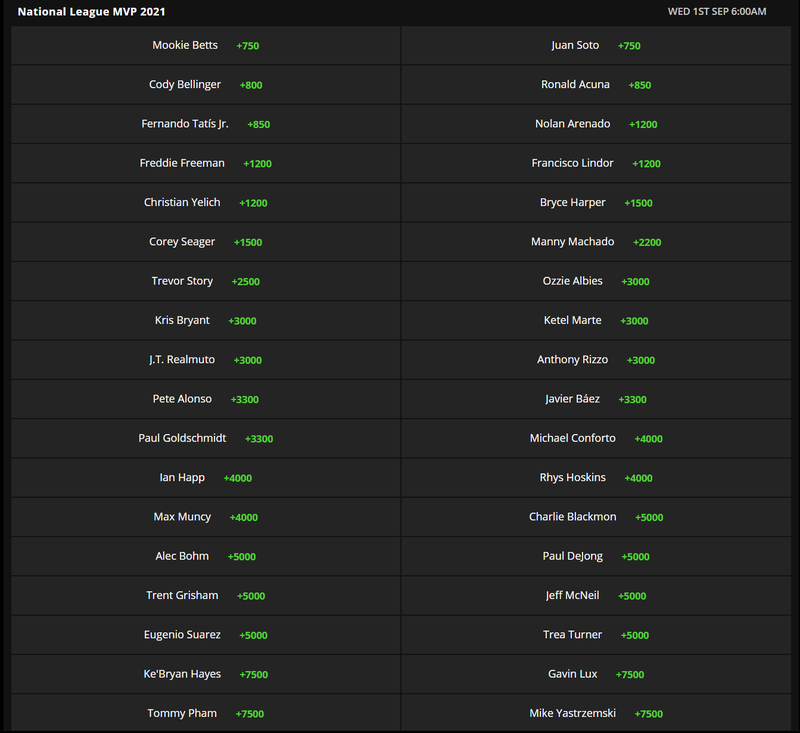 Betts is no stranger to winning awards. In 2018, he won the American League MVP, Silver Slugger, Gold Glove, batting title, and the World Series all in the same season, becoming the only player ever to do so. It feels like the baseball version of EGOTing. That same year, Betts and his longtime girlfriend, Brianna Hammonds, welcomed their first child, so the guy has been living his best life.

Plus, if you’ve followed his career since he was with the Boston Red Sox, you know he’s a talented bowler and he bowled his PBA best in the World Series of Bowling in 2017. There’s nothing Betts can’t do.

The list of great things happening to Betts doesn’t end there. After the Red Sox traded him to the Dodgers in February of 2020, Los Angeles signed Betts to a 12-year (TWELVE) extension in July worth $365 million. In the COVID-shortened 60-game season, Betts finished second in the NL MVP voting to Freeman. Not to mention he also won the 2020 World Series with the Dodgers.

Ahead of last season, Betts opened as the co-favorite to win the NL MVP at +700, along with Christian Yelich, Cody Bellinger, and Ronald Acuna, Jr. By July 22, Betts was the favorite to win the award at +550. Freeman, meanwhile, had +2500 odds by late July.

Mookie Betts and Mike Trout are the favorites to win MVP ⚾ pic.twitter.com/b20SL7X7qq

No matter what, the Dodger has proven he’s the MVP of life right now. But you can Betts your bottom dollar he will be a strong contender for the NL MVP award throughout this MLB season.