A key Virginia state senator has withdrawn his support for a bill that would help fund a new stadium for the Washington Commanders, saying publicly he questions the long-term financial viability of the franchise and, in turn, the revenue it could generate for the commonwealth.

"I've had a chance to read the legislation closely several times in its original and amended form," he said. "I've also followed the news as the team has obtained an option on land in Virginia to build a stadium and surrounding mixed-use development. I respect the fact that it might create jobs and revenue in Prince William. However, I do not plan to support the project or Virginia's pursuit of this NFL franchise.

"I have two concerns. One is that the development is too far removed from an urban setting, unlike Nats Park at The Navy Yard, which will make it solely dependent on vehicle traffic for access. More importantly, I don't have confidence in The Washington Commanders as a viable NFL franchise.

"I grew up a Washington Redskins fan and was a season ticket holder for 22 years. That team defined our community for multiple generations. The Washington Commanders are not that team. They have no history, no tradition and no fan base. I do not consider them an appropriate economic partner for the Commonwealth of Virginia, because I don't think they have the community support to survive."

Petersen joined The Sports Junkies Thursday morning to expound on his position, at one point explaining that he's so skeptical about the long-term prospects of the Commanders, in fact, that he raised the spectre of team owner Dan Snyder one day potentially deciding to move the team out of the D.C. market altogether.

Petersen, who was a strong proponent of keeping the original team name "Redskins" intact, was initially asked if that's what his new public stance stems from.

"No. And to be honest, the name thing unfortunately is over and obviously I was... it is what it is," Petersen said on 106.7 The Fan. "But the point I was making is that the Redskins, as we grew up together, was an iconic part of our community and the figures of that team, the Joe Theismanns, the John Riggins, Darrell Green, up through Sean Taylor, I mean these people were iconic. I mean they were recognizable all over the DMV. And that era is over."

"And, so much of this idea that we're trying to put together this stadium, and we've got this franchise, and we're gonna enter a long-term partnership, at least initially was based on this concept that, yeah, we've got this incredibly valuable NFL franchise with this long history and that's what's gonna make it a long-term partner for the state," he continued. "But none of that exists anymore. You don't have the fanbase for starters, you just don't. You don't have the same identity, you don't have the same community buy-in.

"And I've talked with people about this — this is objective, this is not my opinion. If you look at sort of the amount of community presence and community exposure of this football team versus, say, the Eagles, or the Cowboys, or the Giants or anybody else, it's not comparable. And, again, I'm looking at it from a taxpayer perspective. I've got to make a decision: what makes sense for the taxpayers, what makes sense economically. Because if we, in any way, subsidize — even in a small way — a huge economic development and then the anchor tenant is not a stable entity, and either leaves or does something else, that's a problem."

Petersen was then asked to specify what compelled him to change his vote from a 'yay' to a 'nay.'

"Well, when I was a yes... I've only voted one time. Or, actually two times," he said. "Back in January we had the initial package, and I met with the team's representatives, I looked at it and I voted, and I think at the time — I know at the time — I made a statement in the finance committee, you know, 'This needs a lot of work. We're gonna move it forward. We know that it's gonna go to the House of Delegates. We know that it's gonna get amended. We know that it's got to go to the governor's office and they're gonna have their comments.' And that was in January. That was almost five, six months ago."

"At that time, I was kind of keeping my mouth mostly shut and just sort of letting the process play out, because they hadn't renamed the team yet, they were gonna rebrand," he said. "And, you know, I guess we were all waiting to see how that process unfolded. But I was a skeptic even then. I didn't make any public comments. But now we're at the point where the team is putting an option on land in Prince William County, we're coming back into session on June 1.

Junkies host Eric Bickel acknowledged that there's no question the Washington fanbase has deteriorated over the years, but added, "But, it's still the largest fanbase in town, without question."

"And again, who's the anchor tenant gonna be?" he continued. "Let me ask you all a question. What happens if Dan Snyder builds a stadium or the team builds a stadium, and we build all the infrastructure around it, and five years later they're getting 20,000 people, they're like 'we're out of here.' And then we're sitting there with an empty building on I-95. What happens then, folks?"

That's when Junkies host John Auville remarked that it seems like most stadium deals end up working out poorly for local municipalities, asking Petersen if that knowledge impacted his decision.

"Yeah, and look, I've spent 20 years of my life schlepping out to FedEx [Field], okay," Petersen responded. "Did that transform Prince George's County?"

"I would say no," Auville replied.

"Well that's literally in the middle of nowhere with nothing going on around it, yeah," Bickel said.

"But it's a nice area around it," said Flaim. "I'll defend that area."

"Listen, I'm not bashing anybody. I'm not bashing the decisions that were made," Petersen said. "And if things were different, if this was a winning team, if this was a team that had what I felt was a strong community support, you know what? I'd probably just say, 'Okay, there's some problems with this deal, but whatever. I'll look the other way.' But I'm just not seeing the upside, guys. I just don't see it."

"The number one point I would make is this is not the Washington Redskins," Petersen went on to say. "And everyone wants to take the legacy of the Washington Redskins and what they've accomplished and what they meant in the community, and kind of import this into this new franchise, and say, 'Hey, if we put this in Virginia, it's gonna be a huge attraction and it's gonna draw business and everything else.' But this, in a lot of ways, in my opinion, it's a new franchise. It's almost a generic NFL franchise. And that just puts a whole new spin on it."

Bickel mentioned that the Commanders don't intend to build only a football stadium in Woodbridge (or whichever location they ultimately decide on), but they also want to line it with retail, bars, restaurants and residential living, on top of building a new practice facility and 20,000-seat amphitheater.

"Well they can still do that. They can still do that," Petersen said. "I mean, listen, the only reason my opinion has any relevance is because they want to use state tax money to pay off the bonds. If they didn't want to do that, then who cares what I think? I wouldn't be on this show right now. I'd be driving to work."

Petersen was asked what the thinking is behind the financial justification for local governments funding stadiums, specifically how those governments plan to get their money back. One way, he divulged, comes from the tax revenue generated from players making multi-million-dollar salaries.

"Well, the idea would be that — and we did this with Amazon — that when we make an investment like that, that it creates jobs and the people that get the jobs then pay state taxes," he said. "And that could well work. Listen, guys, don't get me wrong. I would love to be wrong. If the team moves to the stadium and they're successful, and they sign a lot of high-dollar players who pay Virginia income tax — because they don't right now, because the games are in Maryland — then listen, I'm wrong. You're right and I'm wrong. You were correct. But that's how we recoup the money. We gotta have the team stay there long term and we recoup it off the salaries."

"So do you think it's possible that they might move?" Flaim asked.

"I don't know. I don't have any information on that," Petersen said. "I'm just saying if you look at a team that's having trouble and struggling in a market, you know, what are the options?"

Petersen did make clear in the interview that he's merely one of 40 state senators in Virginia, so the bill could certainly still pass without his support.

He also acknowledged he's kept an eye on the proceedings surrounding Snyder, who is at the center of a congressional investigation into the team over alleged misconduct, which Snyder has adamantly denied.

A report from USA TODAY over the weekend suggested that Snyder's fellow NFL owners are 'counting votes' for a potential ouster of Snyder, something NFL Commissioner Roger Goodell has claimed no knowledge of. 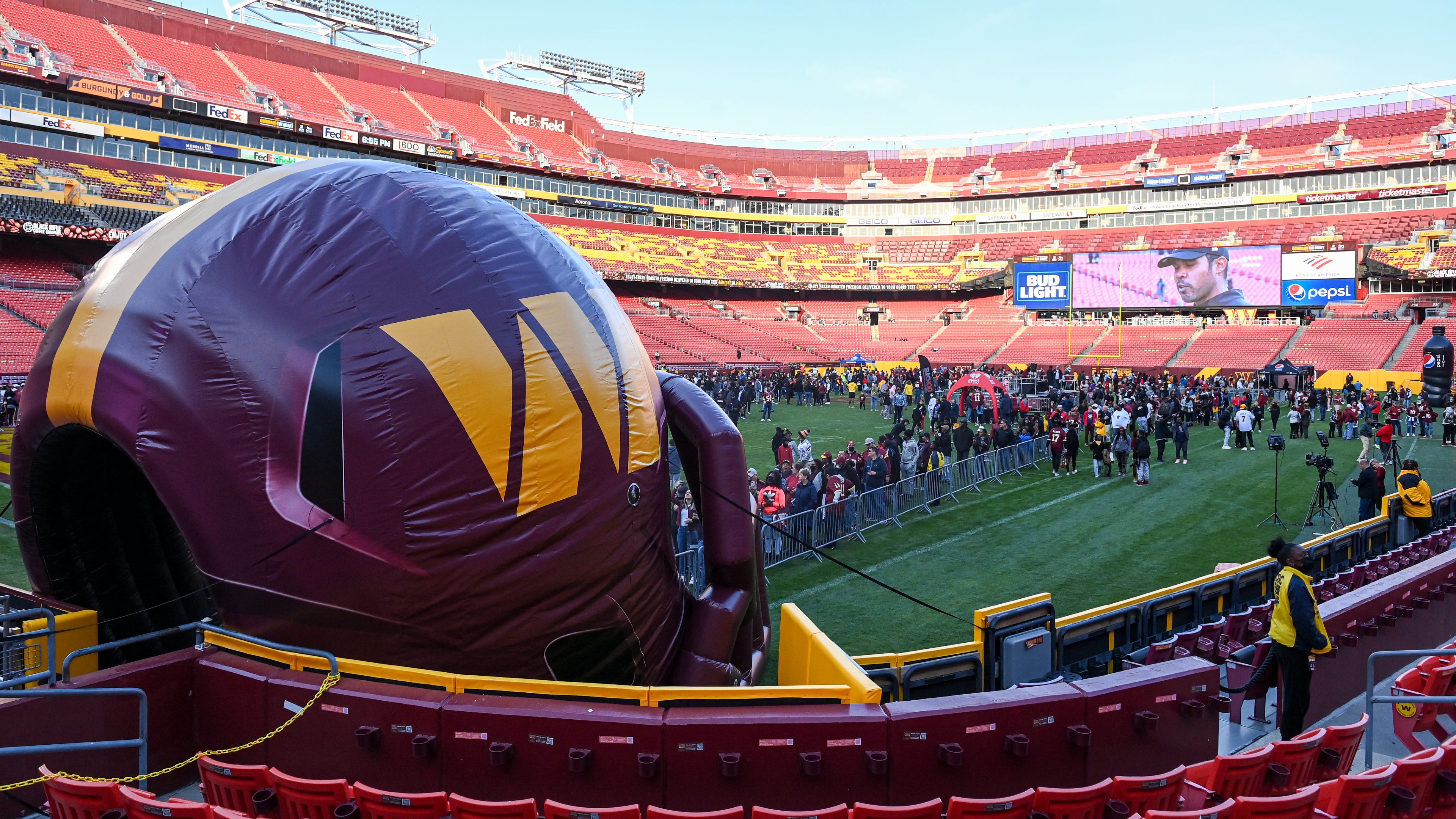