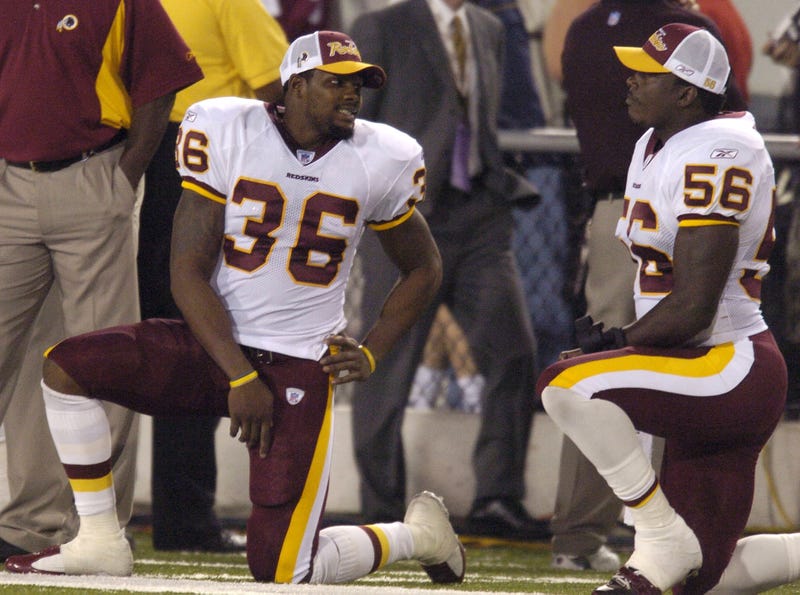 The late Sean Taylor (left) talks with LaVar Arrington (right) on the sideline during the 2004 Hall of Fame game in Canton. Photo credit David Maxwell/Getty Images
By Chris Lingebach and Grant & Danny

LaVar Arrington won't be attending the jersey retirement ceremony for Sean Taylor at FedEx Field on Sunday, a decision that has nothing to do with his personal reverence for his late teammate or the unconscionably short notice given to fans by the Washington Football Team.

Arrington first learned there would be a ceremony – of some sort – sometime a while back, he tells Grant Paulsen and Danny Rouhier on 106.7 The Fan, although he wasn't clear on the details surrounding the planned event. He'd left that conversation up to his wife, Trish, to coordinate with Taylor's fiancé, Jackie Garcia.

"Well, I know I was invited by Jackie — obviously baby Jackie's mom — a while back for something where they were honoring Sean at a game," Arrington said Thursday. "Now, I don't handle all of that stuff, so she was talking to Trish. I don't know the dates of it or the details of it, but she did reach out about something that was going to take place.

The timing and specifics of these details seem to be paramount. Washington team president Jason Wright has been thrust into damage control ever since the team announced the details of the ceremony to fans, on Thursday morning, three days before the event. Somewhere, it seems, there was a disconnect between relating the information to alumni the team hoped would attend and letting the fans know in a timely fashion.

Ryan Clark, another former teammate of Taylor's, also says he was contacted about the event sometime back, when Washington's Director of Alumni Relations, Tim Hightower, reached out on Sept. 22. Although Clark, too, seemed unclear on the specifics.

Since people are wondering Tim Hightower reached out to me on September 22nd to invite me to the @WashingtonNFL alumni weekend. In his text he told me they’d be honoring Sean and his family. Which I assumed was the reason I got the invite since I hadn’t been before.

All good brother. I’m not defending anyone which is why I didn’t change the wording of the message I received. My friend deserves to have his number retired, should have been retired. So, stunt or not I’m glad it’s happening. https://t.co/X1JZU07D8e

More and more it appears that the fans, many of whom expressed anger over the short notice, were the last consideration in the process. A deluge of social media reaction to Washington's announcement shows that many fans would have moved mountains to attend, had they only had more time to plan for it (especially those who live out of town).

Wright penned a lengthy and contrite apology on the team's website Thursday evening, explaining that "we planned to do this right..." but "we screwed up the execution and, as a result, we realize that we hurt many of our fans deeply. And for that I and we as an organization are sorry."

"So you're saying she reached out and said, 'Hey, we've got this event,'" Paulsen paraphrased back to Arrington. "Because people are saying, well, maybe they were coming back for alumni weekend versus actually knowing his jersey was [being] retired. So you don't know the specifics of like what was happening when she reached out?"

"Well you guys know how I handle things with the team," Arrington said, "so it was pretty much a conversation that took place between them, because I wasn't interested." 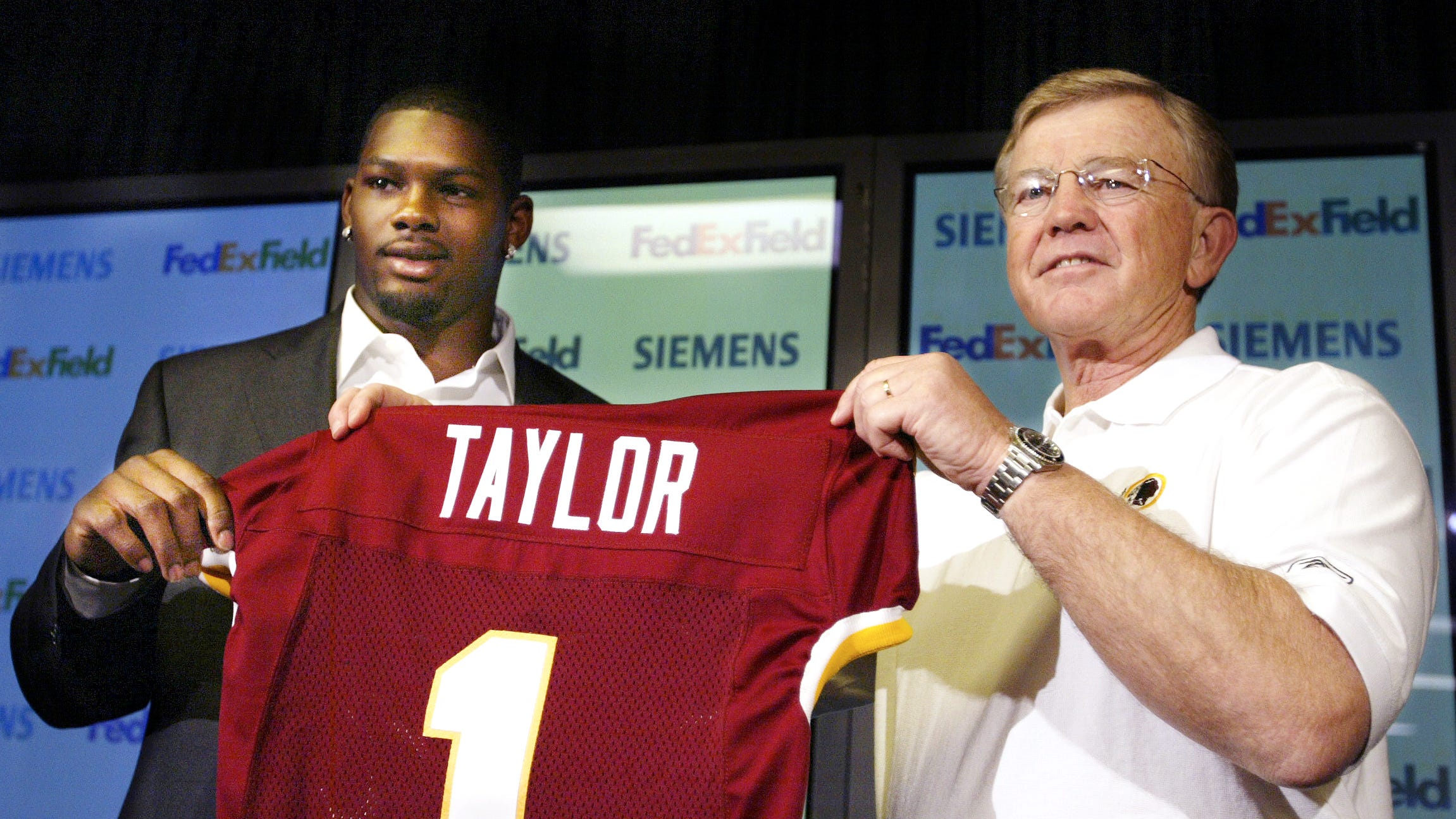 "Let's say that they planned on retiring his jersey months ago," Paulsen said. "What do you make of them not announcing it to fans until today?"

"I mean obviously if I'm coming from a media standpoint, Washington is the gift that just keeps on giving," Arrington said. "It's kind of interesting. You know I'm gonna make this about myself, right? For all those years I was called this disgruntled guy, this guy who didn't know what he was talking about, too dumb to learn his plays, all this other stuff. Now it's all coming out and it's kind of interesting. Everybody's starting to see what it is, the decay, and just the lack of understanding of how to do things and how to treat people."

"Now it's all coming out," he said. "I hope that it's a healing process for those who are there now. But I almost feel like this franchise, Dan Snyder has done so much damage to that franchise and that organization, they should really consider becoming an expansion team. You know, like, you had to change the name anyway. Why not just bury it and be done with it and create a new team? Like it almost seems like you've got to just hit the reset button altogether, because it just doesn't seem like anything will get it right. It just seems weird."

Arrington was asked whether he buys into the notion that Washington may have thrown together a retirement ceremony for Taylor at the last minute as a way of distracting from the organization's recent surge of off-field controversies. "It seems like they're just dipping into this well of goodwill and it blew up in their face," Rouhier said. "The timing part's what we can't get past. What would you say to somebody that sort of is buying that kind of conspiracy?"

"I don't know. I mean, there's such extraordinarily crazy things going on. It's just... it's disheartening is what it is," Arrington said. "Because you have some really good people who are trying to do things the right way. I do know that for a fact. Like I said, there's so much damage, you're probably going to catch flak for things that you're trying to do that unite versus separate."

"And how can they build goodwill at this point to try to move on? I don't know. When I was there, you had enough of a fan base, which they were older, right? It's when you guys were kids. You had enough of a fan base that could weather all of the storms that were taking place. You don't have that with that fan base anymore. You don't have the fierce loyalty in numbers and droves of people like you've had in the past. It's withered away. And it's just getting to a point now where, what do you care?

"You know, that's the thing about it. It's like the old heads will continue to love and care about the team and have their idea of it. But everybody else, it's like, it's a sports team. What do we care? I can choose the Ravens, they're right down the road. Hell, I can choose the Philadelphia Eagles if I wanted to have a local team. It's just sad that an organization has dropped so low, fallen so low that you almost get the feeling that it could be at a point of no return for the place."

Asked if he's still at a point in his relationship with the team in which he doesn't return for alumni events, Arrington said, "I acknowledge the fans. I don't acknowledge my time."

Alumni relations has been an area where some who've played for the organization feel there could be great improvement. The aforementioned Hightower, who played running back for Washington in 2011, rejoined the organization in Dec. 2020 to head up the department. Charles Mann, one of the franchise's all-time greats, said in July 2020 that he no longer feels welcomed or included by the organization, going as far as to say, sadly, that he feels much closer to the 49ers, for whom he played just one season.

Arrington was asked to confirm if he has a close relationship with Hightower.

"You're not coming back to alumni day to wave to the crowd if Dan's sitting in his box, basically," Paulsen joked.

"Yeah, you probably won't see me toasting it up with him over a big play," Arrington said.

In addition to his illustrious NFL career, Arrington previously hosted afternoon drive for 106.7 The Fan, has been a TV analyst for NFL Network and currently hosts the "2 Pros And A Cup Of Joe" morning show for Fox Sports Radio. You can keep up with him on Twitter here.