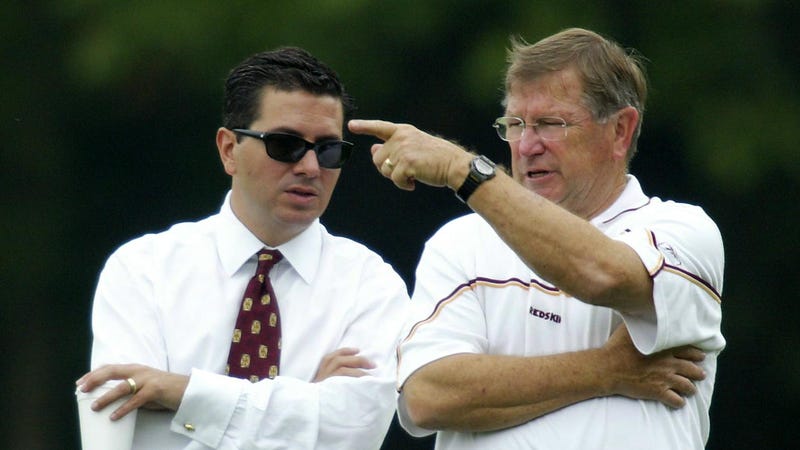 Scrambling for an athletic trainer with Ryan Vermillion on administrative leave, Washington reunites with longtime former trainer Bubba Tyer, who's been in retirement since 2009. Tyer is seen here alongside team owner Dan Snyder in 2004 after being called out of retirement when Joe Gibbs returned. Photo credit Preston Keres/The The Washington Post via Getty Images
By Chris Lingebach

The Washington Football Team has reunited with longtime former athletic trainer Bubba Tyer, at least for the time being, as the organization scrambles to fill out the duties typically carried out by Ryan Vermillion.

Vermillion, Washington's current head athletic trainer, was placed on administrative leave this week after his home and Washington's practice facility in Ashburn were raided by the DEA last Friday.

ESPN's John Keim, a longtime Washington scribe, was the first to spot Tyer on Wednesday, noticing Tyer standing alongside Norv Turner, who's a bit of a throwback himself. Turner is the father of offensive coordinator Scott Turner and coached the Redskins from 1994 to 2000. The elder Turner has been attending practices as of late as a consultant to Ron Rivera's coaching staff.

Per Grant Paulsen of 106.7 The Fan, Tyer was the first person Washington called in the frenzy to replace Vermillion.

Was told Bubba Tyer was the first person @WashingtonNFL called in frenzy to replace the many hats Ryan Vermillion wore. RV was head trainer and ran covid protocols and interactions with NFL on covid compliance etc. I guess Bubba took call. Time with ORG dates back to the 70s. https://t.co/lRxK4dTiCn

Lamar 'Bubba' Tyer served as Director of Sports Medicine when he retired in Jan. 2009 after 37 seasons with the organization, spending 25 of those years as the team's head athletic trainer. It was his second stint with the organization after previously retiring in 2003. Tyer was called back into action when Hall of Famer Joe Gibbs returned as head coach in 2004.

Tyer was inducted into Washington's Ring of Fame at FedEx Field in 2003.

Rivera said former Washington trainer Bubba Tyer is here volunteering. Will help out. Rivera said they will do a lot of this by committee.