The Washington Wizards made another ho-hum trade on Monday, dealing former first-round pick Rui Hachimura to the Los Angeles Lakers for Kendrick Nunn and a trio of picks that maybe but probably won't amount to much, years from now.

In addition to Nunn, these are the picks the Wizards get back:

To The Sports Junkies, it was a wasted effort and yet another example that the Wizards are continuing their years-long trend of just spinning their wheels.

"I got a little angry when I read that they're not even gonna consider trading Kyle Kuzma," Flaim said. "Because, what I would equate the Wizards with — at least the last couple years with Tommy Sheppard — is it's a hamster wheel. It's just spinning round and round."

"He likes to make a lot of deals," he continued. "But, if you look at it, in the last three years... you look at their record three seasons ago when they had Russell Westbrook. So they traded John Wall. They decided: You know what? It just hasn't panned out like we would have liked with John and Bradley Beal together. We maxed out at second round in the NBA Playoffs. John's damaged, whatever. The chemistry's not what it was. We're gonna ship out John Wall."

"Then they ship out Westbrook. They get Kuzma, KCP, Montrezl Harrell, Spencer Dinwiddie — think of all these guys they've had! Then they trade 'em for Porzingis. So now they've got Kuzma and Porzingis together. And they haven't played a ton of games together, and maybe their hopes and EB would say, 'Well, they're banking on when these guys are together, they're gonna start winning.' They're spinning their wheels!"

(Listen starting around the 20-minute mark below.)

JP: Nunn is barely gonna play on this team! Tell me what Nunn is gonna do for the team. And then they got a bunch of second-round picks. We know that's worthless! They gave him away for nothing.

Cakes: The Wizards can't hit on first-round picks! Unless they're like the second, first or third pick. How on earth are they gonna hit on a second-round pick?!

EB: The second-round picks are nothing.

EB: They didn't acquire him because of him. That's not why they acquired him.

JP: I know! They just gave away Rui!

Drab: He's a nothing. He scored zero points in 11 games this year. I don't understand. Did Rui's contract sneak up on Tommy? Why wasn't Rui traded this summer when you had a logjam of small forwards on your team or power forwards?

JP: Or be bold and trade Kuzma! And re-sign Rui because he'll be cheaper and you'll get about the same production!

"The apathy in this town for the Wizards is deservedly so, because they don't do anything," Drab said. "But don't get it twisted. They're the Commanders on the field. They have the same winning percentage over the last 15 years. This team sucks! The franchise sucks! They do nothing! They're stuck! There's no plan! There's no hope!"

"This trade just sums up everything," he continued. "The only people who are happy about this trade are the Japanese, because their native son is going to a real NBA city and a real team that takes winning seriously."

"Just think of how many deals, though," Flaim said. "They went from Wall to Westbrook; Westbrook to Kuzma, KCP and Montrezl Harrell to Spencer Dinwiddie; Davis Bertans gets moved; Porzingis. It is shuffling the chairs on the Titanic! That's what they're doing!

Or, as Drab so poetically put it: "He's throwing a bucket of crap against the wall."

Listen starting around the 20-minute mark in the player above. 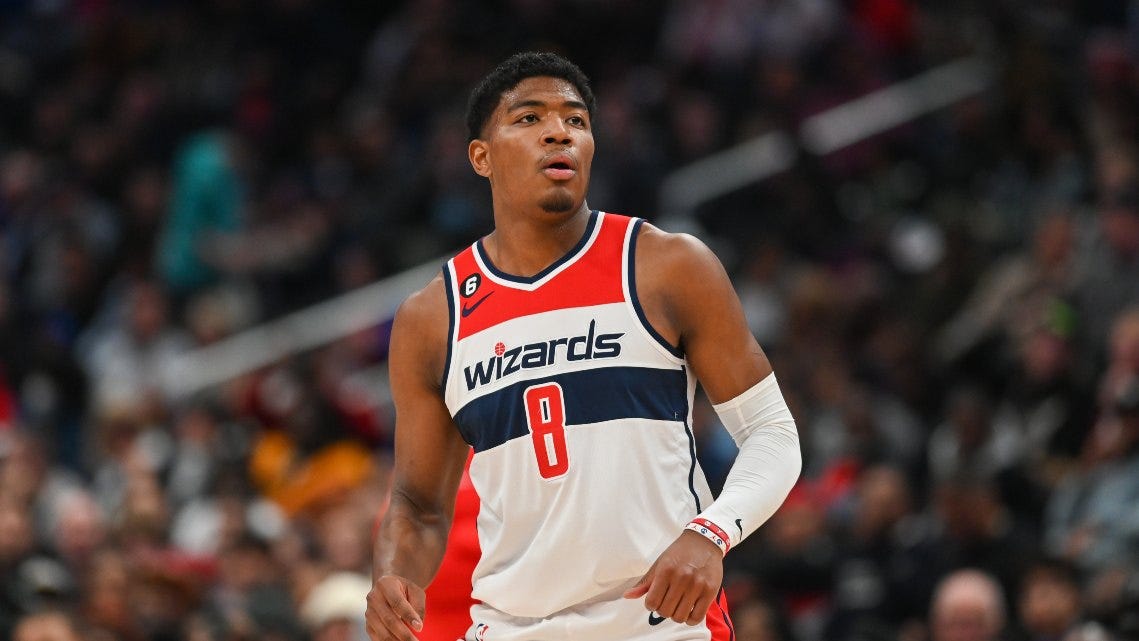