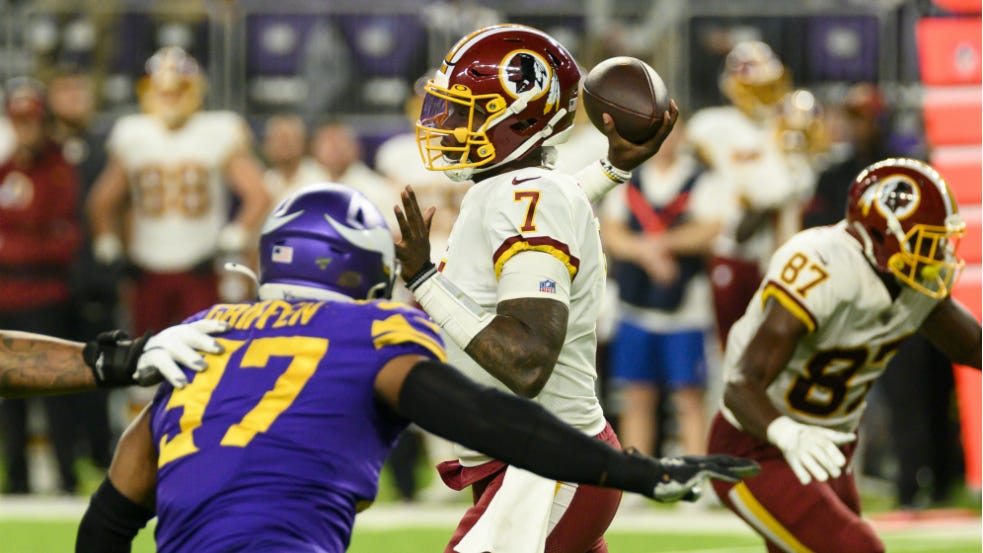 Why Redskins Must Let Dwayne Haskins Go Through Growing Pains Now
The Dwayne Haskins era seems underway and nothing changed. The Redskins lost, Haskins looked iffy and the team hit midseason at 1-7.

It's time to move on. The Redskins need to hit Tuesday's trade deadline hard as sellers, not buyers. They are not close like president Bruce Allen likes to peddle. Nor are they a 6-3 type team like last year before quarterback Alex Smith was injured as Allen likes to say.

No, the Redskins are pretty rock bottom. They'll likely be among the top five for next year's draft, and rightfully so as one of the league's worst teams.

That draft is the key to rebuilding and the Redskins need picks, not aging veterans who won't be here by the time Washington is ready to contend once more. That's why they can say goodbye to Pro Bowlers Trent Williams, Ryan Kerrigan and Josh Norman.

Williams hasn't yet buckled to Allen's foolish plan and showed up after missing game checks. That was a bad miscalculation by Allen and yet another example of why the Redskins have imploded. Now there are whispers an offseason trade for Williams will merit more than exiling him right now. That's a second miscalculation. A team needing a left tackle will simply draft one come the offseason rather than overpay Washington for Williams as they would now before the trade deadline.

Williams, 31, could merit a second-rounder in the right situation. That pick will help find his successor. If Washington drafts in the top five, the Redskins can take a left tackle and then use this second-rounder for a tight end or cornerback. Without this pick, Washington might be less inclined to take a tackle in the first round and opt for a sexier pick.

Five teams may be interested in Williams. Cleveland has admitted calling Washington, though Allen says he hasn't talked trade with anyone. Well, listening to an offer without countering could be couched as not talking trade and Allen lives between the lines. Aside from Cleveland, Minnesota, the New York Jets, Carolina and New England are reportedly interested. Surely, a smart GM would be able to create a bidding war for Williams' rights. The winning team knows a new contract will be needed, though, to probably depress compensation by one round.

Kerrigan, 31, has largely been a non-factor this season with only two sacks. He has never been a great run defender. Now his pass rushing is diminishing. It's not easy to say goodbye to one of the team's good guys that has never missed a game in nine seasons, but Kerrigan can't help them win in 2022. Yet, maybe a second- or third-rounder in trade benefits the team.

Norman, 31, won't return for the final year of his $75 million deal. He has just been fair over four seasons, and $12.5 million next year can be better spent elsewhere. It won't be easy to trade Norman because teams know they'll need to redo a deal rather than pay $12.5 million next year, and then see him leave. But, Norman can help a playoff contender for the next few weeks, so it's worth a gamble to the right team. He might merit a third-rounder.

Ultimately, the Redskins will be lucky to trade anyone. But, they have to try because the rapidly-dwindling Redskins fanbase is desperate for hope. Staying the course is simply a direct path to the bottom.