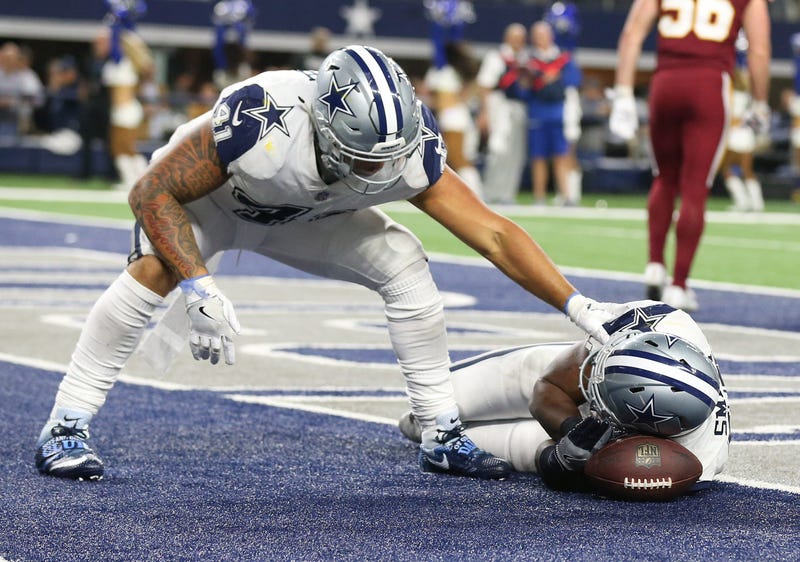 What does it mean to be a fan?

Does it mean investing yourself emotionally into a team and letting those emotions be your guide, logic be damned?

The Redskins face the Cowboys for the first time this season on Sunday. One of the historic rivalries of the NFL, it has lost some of its luster over the years, and the generational gap between fans who grew up watching the Redskins win Super Bowls and those who didn't is a huge contributing factor. That gap is widening.

"I think if you're part of this generation – mid-30s and older – you understand and you still have that visceral reaction when you hear Dallas Cowboys," Danny Rouhier told his younger co-host Grant Paulsen on 106.7 The Fan. "For you, as a fan of D.C. teams, you're like, 'Yeah. I don't like Dallas. I'd like to beat them.' For me, I would trade a lot. I would lose two games if it meant I could beat the Dallas Cowboys. Now, if those games were to Philadelphia, that's a disaster."

"That makes no sense, though," Paulsen said.

"It doesn't matter about making sense," Rouhier said. "It's that rivalry. And that's my point. It's engrained in so many of us because it was my parents and whatever else."

This notion of trading success against others for success against the Cowboys set the show on a collision course of ideology, pitting emotion vs. logic, a battle that cuts to the heart of fandom.

"Hang on. Hang on," Paulsen said. "You this year would trade in two games, and have a worse record, and miss out on the playoffs potentially, so that you could beat Dallas?"
"If I get to beat Dallas twice, absolutely," Rouhier said. "I care about it so much."

Paulsen rephrased the question: "The Redskins can go 10-6 and lose to the Cowboys both times. Or they can go 9-7 and beat the Cowboys twice, and at 10-6 they make the playoffs, and at 9-7 they do not. You're choosing beating the Cowboys and missing the playoffs?"

"Yes," Rouhier said. "Because that 10-6 team isn't going anywhere in all likelihood."

"It's not about making sense and that's my point," Rouhier argued.

Paulsen: "That is a terrible bit."

Rouhier: "It's not. It's not a bit. It's a visceral reaction. That's the thing that you and younger fans don't understand."

Paulsen: "But that is a completely botched, warped prioritization."

Rouhier: "That's what fandom is."

Paulsen: "The entire point of this is to make the playoffs."

I don't believe this. Terrible. but @FunnyDanny just said he would rather miss the playoffs and beat the Cowboys twice than make the playoffs going 0-2 against them.

"Guy. I love ya. I think this is your worst bit you've ever done," Paulsen said. "This is such a terrible take."

"It's not a take. This is an emotional, visceral reaction that young people don't have," Rouhier said. "Anybody around my age group and older understands this completely and is hearing you talk from the high and mighty emotionless press box where they don't understand what you're saying.
"I know you're confused by this, but for all the old people – that's who I'm speaking for now as a 39-year-old – we understand this and we're born into it, hating them so much that you would do almost anything to beat those sons of bitches. I hate them so much and you've never been able to match that hate. The only time that you experienced a fraction of that hate was one time when Rangers fans were annoying to you, at what was then the Verizon Center. And you came in and you sounded like me on a Monday morning after losing to Dallas. And I just sat there nodding my head. I go, 'Yep. I get it. That's the feeling.'

@granthpaulsen I’m 28... I cannot fathom having such a loser mentality where you’d rather beat anyone twice than make the playoffs. Aren’t we forgetting that we’re in a division with them and the purpose of beating them is to make the playoffs? Rivalries were born from the stakes

Naah. While it always sucks losing to Dallas, getting a ring at the end of that season makes up for that loss :)

Paulsen continued getting hung up on correctness as Rouhier tried to explain that doesn't come into play, that fan emotion is blind.

"There's a lot of takes that old people have that aren't right, if we're going back through history," Paulsen said.

"I'm not saying it's right. I'm not sitting here advocating for it," Rouhier tried to explain it another time. "I'm not going to write a paper on why it's correct. I know it's wrong. I know that what you're saying is – again, if you take emotion out of it, and that's usually what we try to do on the program – is let's analyze: What's right and wrong? That's the correct take, yours is.

"What I'm telling you, this isn't a take. This is a visceral, emotion-filled gut reaction about how much those evil pieces of you-know-what mean to me. Them going down is almost more fun than winning the game. I love watching them lose more than even I like to win."

"I am shocked," Paulsen said.

"You shouldn't be," Rouhier returned.

A caller in the next segment tried his hand at explaining fan emotion to Paulsen.

"Grant, are you without passion at all? Do you not understand rivalries?" said Matt in Reston. "Like it literally is driving me crazy that you do not understand hating someone so much that you will give anything to see them lose. I watch Dallas games just to see them lose. It doesn't matter who they play, I want them to burn. This is a passion. You're talking like you're without passion."

Grant made his final plea for sanity.

"It's one thing to feel this way with my heart. It's another thing... my brain is telling me, because I'm a human and I'm an adult, that I'm not seven anymore and I can't pretend like something is that isn't. And so, to me, I'm not bothered or upset that people – 29 percent of them on Twitter or whoever's calling in now – that feel this way. God bless you. I mean, that is your prerogative. It is the equivalent to me, if we're having this debate right now, of like what is 2+2? And people are going, 'I can't believe you can't see that it's 3!' Like that's how I feel about this. And that's cool. If it's three to you, it's three to you, man. But I just... I can't do it. I can't get behind it."