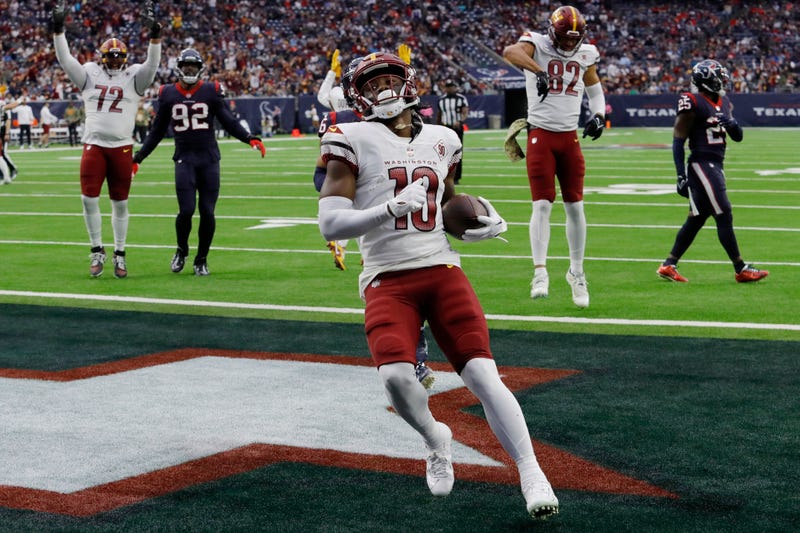 A dominant win for the Washington Commanders over the Houston Texans pushed the club above .500 to 6-5 in the 2022-23 season, while backup quarterback Taylor Heinicke was named the go-to for the rest of the schedule.

On a Victory Monday (Nov. 21), Adam Epstein gave his 10 takeaways from the team's win in the Lone Star State.

He kicked -- pun intended -- things off by emphasizing his confidence in kicker Joey Slye.

"I now fully trust our kicker," Epstein said. "I didn't think I would say that at the beginning of the season -- back at one point this season, I said let's get rid of Joey Slye, let's move on to a new another kicker. Now, two weeks in a row, another 100% performance from your kicker. [...] I love that when you have confidence in your kicker, especially with an offense that's kind of struggling, just get in field goal range and you keep the momentum by putting points on the board."

He also highlighted the defensive rebound from the team over the past couple of weeks, a dependable pair of safeties and Antonio Gibson continuing to improve.

Continuing his commentary on the offense, Epstein turned to quarterback Taylor Heinicke.

"Number five: Taylor Heinicke he needs to play better," he said. "I mean, big facts right there. 15-of-27, 191 yards, you're not going to win many games when you get that kind of average production from Taylor Heinicke."

He also praised Curtis Samuel, who bounced into the end zone for a touchdown, as well as Jonathan Allen.

"Jonathan Allen is getting to Aaron Donald, prime Ndamukong Suh-levels good. I mean, that's what it feels like. He is so strong. He is spectacular. Jonathan Allen is a Pro Bowler by far again this season."

Epstein's ninth point was just how positive the feel around the team is.

"Number nine: I don't know how anybody could argue with me on this one, but vibes are sky-high right now in the locker room for Washington," he said. "I feel like that Eagles win has the Commanders feeling like they're a top team, and then they have a little bit of swagger because they backed up that win by destroying the Houston Texans. Now, [there's] a big game against the Falcons coming up this week, but I truly feel like vibes are higher than they've ever been."

You can listen to more of the segment below.