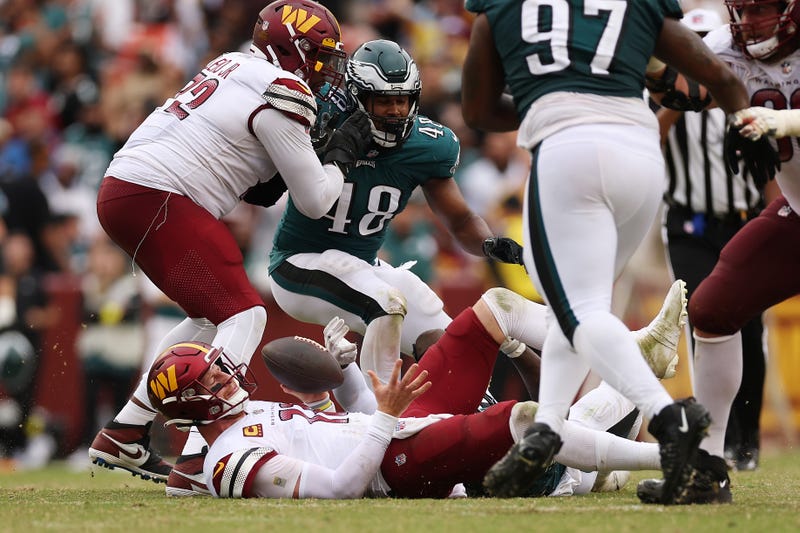 Carson Wentz is sacked during the Commanders' loss to the Eagles in Week 3 of the 2022-23 NFL season. Photo credit Getty Images

Sunday's (Sept. 25) loss for the Commanders featured the second straight game in which the team failed to score any first-half points, putting up a zero through two quarters against the Eagles in an eventual 24-8 defeat.

"I felt the same thing watching the game," Epstein said. "I knew what the play call was going to be. I'm watching the game live, I'm sitting at home and I'm thinking, 'oh, this is going to be play action.' And you know what? It was play action. [...] I'm saying, 'hey, Eagles are blitzing seven guys here, we're gonna get sacked.' That's exactly what happened. No adjustments, the play-calling after that first quarter, you have to say, 'I'm going to toss out the rest of the seven-step drop backs. It's obviously not working. You got to do five steps and three steps. And I'm going to stop doing single-back and start doing shotgun only. I'm making those adjustments watching the game, as if I'm playing Madden, but Scott Turner can't make those adjustments."

Epstein also discussed how running plays could've been used to avoid those sacks and gain more on the ground.

"We only ran the damn ball like eight times," he said. "I'm saying the same thing every week [...] nobody on the defense was faked out by the play action. You could watch the D-ends. They pretend to go after the running back and they know for damn sure he's not getting the ball. They know to turn around and go after Carson Wentz. It's so frustrating."

Check out more from the segment in the audio below.