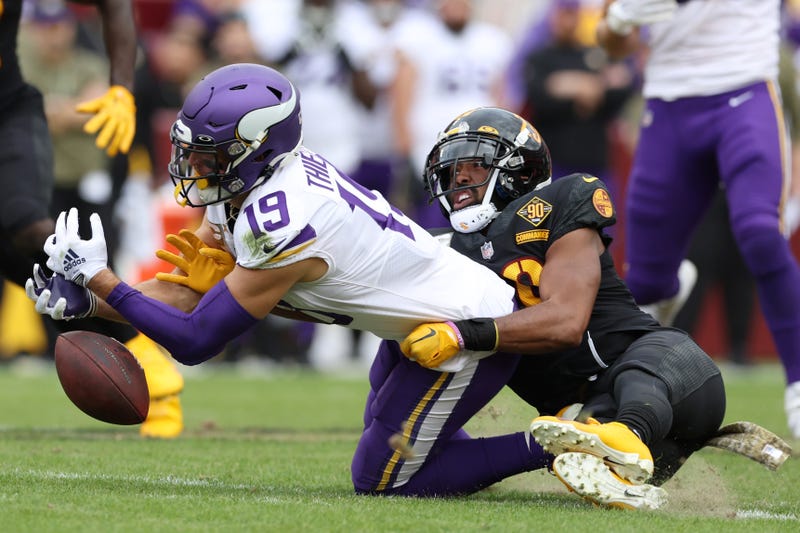 After the Washington Commanders' 20-17 loss to the Minnesota Vikings on Sunday (Nov. 6), Adam Epstein discussed the game on Monday and his 10 takeaways from it.

Chief among them was the Commanders' offense.

"Number one, the offense is just not good enough," he said. "We don't get our playmakers involved enough, we tried to force it to Terry McLaurin there. [...] We can't run the ball at a high enough average -- third-down conversions are our again."

He also discussed why he thinks Logan Thomas isn't the same player he once was and how the Commanders desperately need help at tight end, and added that the offense is in need of Jahan Dotson's return to expand the weaponry for whomever is starting at quarterback. He elaborated on Heinicke's struggles with the offensive line and seeing over the top with more deflected passes than there should be.

On the opposite side of the ball, he praised the defense overall but criticized their playmaking against Minnesota.

"The defense is good enough to win nine games and make the playoffs," he said, "but that's the most important thing about complimentary football, right? When your offense makes a mistake, your defense needs to come up and make a huge play. And they failed to do that after Taylor Heinicke threw the interception -- they let Minnesota go right down the field and get the game-winning field goal."

That turnover lost the game, coming it at #4 on AWadd's list, but he did highlight the special teams' efforts so far this season.

"Time management with Ron Rivera [is] just his worst nightmare," Epstein said. "He failed us again. He failed us miserably. You have to take a timeout there before the two-minute warning. You never challenge a call in the second half. unless you're absolutely sure that you're right or it's going to be a game-changing call, so you might as well go for it.

"He challenged that play and we knew we weren't going to win that challenge ... cost us a timeout. We're down to one time out there, in the final two minutes of the game, when we need to get the ball back. [...] Dumb, dumb, dumb from Ron Rivera."

Penalties were another takeaway and how much they impacted the Commanders, but the final point on the list was the momentum of the last few weeks. Three straight victories going into D.C. against the Vikings turned into a snapped winning streak.

"Momentum in the NFL [is] one of the most real things in sports," he said. "When you lose it, it's hard -- it's almost impossible -- to regain the momentum, and that's what happened with Taylor Heinicke. [When] he threw that interception, you just knew that it was over. There was no coming back from that."

Check out more of what he had to say at the audio link below.