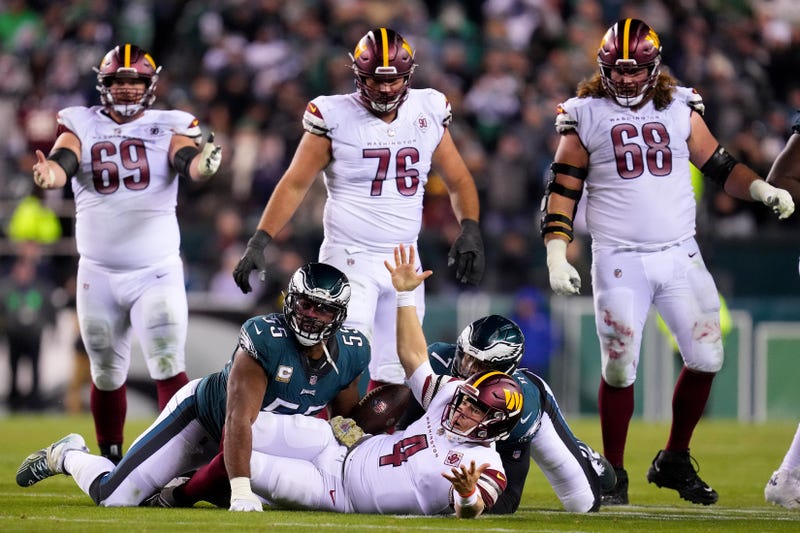 Yet that's exactly what the Washington Commanders did on Monday Night Football on Nov. 14, 2022 against the Philadelphia Eagles, improving to 5-5 while dropping the undefeated Birds to 8-1.

On a Victory Tuesday edition of the Fan's midday sports show, Adam Epstein gave his 10 takeaways from the big win for Washington.

"Number one, Washington stuck with the rush," he said. "Not like it was the most effective rushing attack that we've had in a long time, but we stuck with it and I think that was key in the fourth quarter of that game, it was key in the entire second half [and] it's why Washington was able to come away with the win. Because we stuck with it, we didn't give up on it -- we were dominating the time of possession, and the reason was because the running game.

Epstein also highlighted the defense, from turnovers going Washington's way to the cornerbacks bouncing back after not having the best first half to the season.

"Number four: Heinicke," he added. "Just above average, strong enough in the first half there and gritty in the end. Good enough to get the victory."

Adam also praised the trick plays with Curtis Samuel, as well as Joey Slye at kicker continuing to prove him wrong. His one complaint was directed at Ron Rivera after the game.

"Ron Rivera's time management is still a big issue," he said. "He just doesn't know what he's doing, and it's it's embarrassing watching it. I mean, even at the end of the game, you didn't have to punt it back to the Eagles. That was so stupid. Who kneels the ball in victory formation when there's time left on the clock?

"They should have ran around in the backfield or handed it off to somebody, had him waste time before going down. It made no sense to have Heinicke kneel the ball on second down. Ron Rivera's time management is still a big issue."