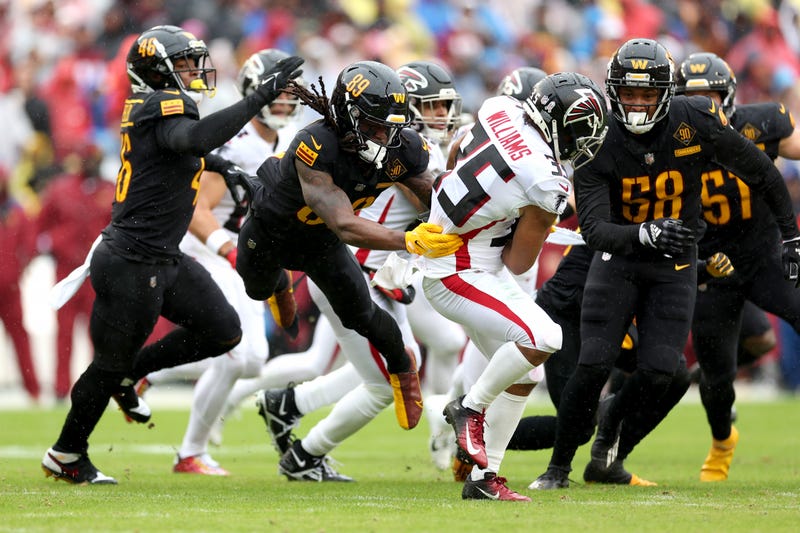 The Washington Commanders won their third game in a row on Sunday (Nov. 27) with a triumph over the Atlanta Falcons, and Adam Epstein gave his 10 takeaways from the victory on Monday on the Fan.

"Number one, Brian Robinson's got that dog in him," Epstein said. "[...] He runs people over. I could rewatch that touchdown pass and run over and over again. He trucks, like, two guys on his way to the end zone.

"Takeaway number two, the offensive line is getting better with consistent play," he said. "All five of the same starters on the offensive line now for five straight games, and we're seeing that -- 179 yards on the ground for Washington yesterday."

He also shouted out Taylor Heinicke, who while not superb has been solid enough at quarterback to win games, and both Daron Payne and Jonathan Allen on the defensive line.

Tress Way followed, with Epstein praising his ability at punter and taking hte contact that sealed the game for the Commanders, plus his confidence in Way's fellow special teamer Joey Slye.

"Number seven: Darrick Forrest and Kendall Fuller," he said, "a great duo playing great as a safety-cornerback duo. [...] Terry Maclaurin [is] number eight: he keeps making clutch catches. He only had four grabs, but that big 26-yarder in the first half, set the offense up and got us in the end zone."

"Number 10, at the end of the game there with the Falcons driving, I felt like for the first time all season [that] the Commanders that would make a play to win this game.

"It's totally different than the beginning of the season. We were not winning close games."

You can listen to the full segment below.