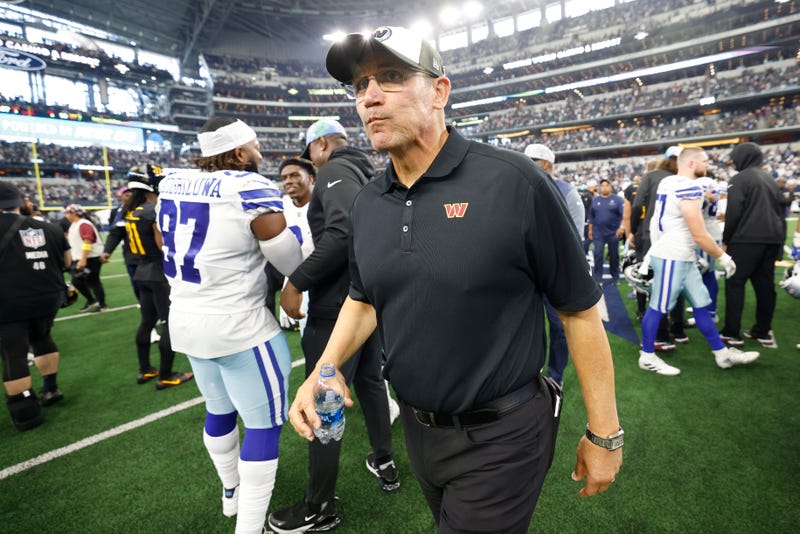 Washington Commanders coach Ron Rivera walks onto the field after the team's 25-10 loss to the Dallas Cowboys in 2022. Photo credit Getty Images

On Tuesday (Oct. 4), Adam Epstein returned to the air on 910 the Fan and gave his thoughts on the Commanders' 25-10 loss to the Cowboys in Week 4 ... and presented a solution he came up with to Washington's woes.

It concerns head coach Ron Rivera, bringing back old coaches, returning a piece of the RGIII years and bringing on AWadd himself:

He also name-checked Bobby Slowik, a former assistant coach in Washington who now coordinates the passing offense in San Francisco. Given how many pieces from previous Commanders teams who have moved on to success - Mike McDaniel in Miami, Sean McVay in Los Angeles among them - he thinks it'll be a fitting puzzle piece.

"I like Bobby Slowik to be the head coach, because I feel like one of these guys is going to hit and he was on that magical staff in 2011," Epstein said.

"The final thing we are going to do -- this is where the idea really gets brilliant -- we are going to hire me, Adam Epstein, as the clock management coach and video review boss, because I play enough Madden to know how to execute a two-minute drive. Ron Rivera has no idea how to do that. Did you see the end of the first half against Dallas? He let 40 seconds roll off the clock and then just punted by throwing deep into double coverage. I'm everything coaches need in their ear, because apparently, clock management is Ron Rivera's biggest flaw and I play enough Madden to understand how the clock works in the NFL. I'll be in charge of initiating challenges. Guys, I have a background in video editing. I have the eye for it. I could quickly see on the replay whether or not to throw the red flag. And I know for a fact I'm going to be more correct than Ron Rivera with his dumb shaded glasses."

Listen to more of Epstein's plan below.