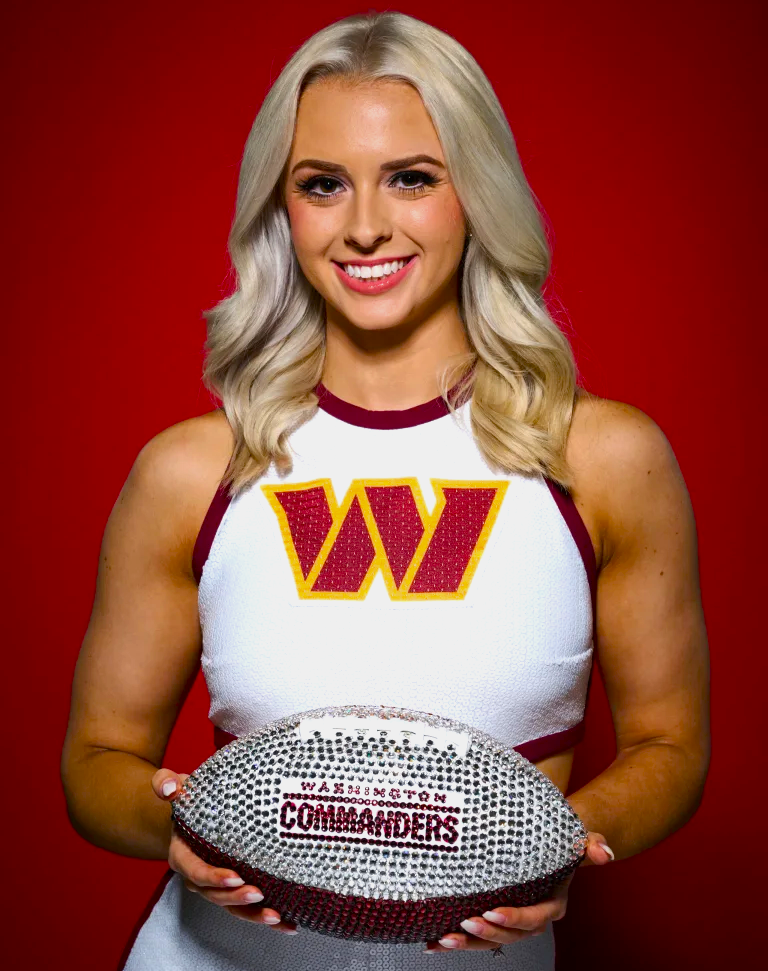 Adam Cheek sat down with fellow VCU alum Jordan Shortnacy, currently a dancer and captain with the Washington Commanders' Command Force and formerly part of the Rams' Gold Rush dance team, to discuss her career in the performing arts, the differences in approach for cheerleading & dance squads, the transition from college to pro and more, their mutual love for the Pitch Perfect franchise and more. Check out the full interview audio here, plus an abbreviated, written version below.

﻿Adam Cheek, SportsRadio 910 the Fan: How [did] you become interested in dance to begin with?

Jordan Shortnacy: It's actually kind of funny. I chose dance at the age of three -- my mom and dad tried to put me in soccer and a bunch of [...] general sports, and we passed by a dance studio when I was about three years old, and I looked at my mom and I was like, "I want to do that." And then from then on, I've just always danced, and then growing up, I've always lived in Northern Virginia -- my dad was born and raised in Northern Virginia, too. So him and I always watched the Commander's games formerly known as the Redskins. And then also my mom is from Buffalo, N.Y., another little fun fact. So [the] Bills is a big team in our family too, [a] little homage to her as well. So both teams for us.

Cheek: What was your experience like with [the Gold Rush] over those four years [at VCU]?

Shortnacy: It honestly was incredible, my coach was amazing [...] she was such a phenomenal coach. And when I came to VCU, unfortunately, from just dancing for so long, I was a little bit burnt out and I wasn't really sure if I wanted to continue dancing after college, which is funny because I went to school for majoring in dance. So you expect I would want to go afterwards and dance elsewhere, but she was the one that actually reignited my fire to continue afterwards. But I can't tell you how inspiring she was in those four years and just someone I could always go to, and just the team in general -- like the girls that were juniors and seniors when I was a freshman and sophomore really helped my love of the team continue, and then I was able to continue that for the girls that were below me, after I was getting older and about to graduate. So [...] I loved it, I can't tell you how much I loved it. It made my four years of college completely amazing.

Cheek: What were the differences between a collegiate squad and the NFL?

Shortnacy: For me personally, when I was going from the Gold Rush to the NFL, [I was] fortunate enough [to be] very prepared. I would say the difference between collegiate and NFL is that there is more expectations in the NFL, especially just because you have to be really, really conscious of [things] like social media, just because you are in the public eye a lot more. So you need to be a great example for younger girls and boys on just being a good person and everything, so that's definitely more of a thing that they do for the NFL, just because we're on TV and in the public eye a lot more than on a collegiate team. And then the practices are also longer -- my practices in college were a couple hours, but NFL is definitely longer too.

Cheek: 2019 was your first year, so obviously the team made the switch to being the entertainment team from a cheerleading squad during that span. What are some of the [differences in] approach and style between the two?

Shortnacy: Yeah, that's a great question. So I would say that's a lot of people's question, is like, what is the difference between the cheerleading and the entertainment team. So the cheerleading involves more like pom poms, it was a little bit more girlier style -- we consider the styles that we would mainly do would be jazz and a lot of palm dancing, and then the entertainment team involves three different amazing types of people, so it involves like our core dancers, and then we have gymnasts, who are incredible. They also do stunts, and sometimes when they do the stunts, I get freaked out because they just fly in the air and they're totally secure. Like they're not going to fall, but it makes me so scared because I [have] a dancer background, we don't do that kind of stuff. So it's amazing to see them flip like 10 feet in the air or toss someone up -- it's incredible. And then we also have "beat your feet," which is our freestylers -- it's so much fun to have them, they have such great energy and they just add a new element to our dancing. I think a really cool thing about the entertainment team is that even though we all have our little individual things, we all come together as a family and really dance together, and everyone's grown even more just because we're learning different things. I'm learning more tricks than I've ever had to do before, because I feel inspired by the gymnasts, because they're doing all these crazy things. And the gymnasts are learning choreography and improving in that, like that's a whole different skill for them that they're not used to. And then the "beat your feet," they're learning more choreography, too, and that's even pushing them to be able to retain choreography like that. So all of us are kind of getting great challenges throughout the season to improve in to just make us overall better, so I love it.

Cheek: [In] Week 1, the win over the Jaguars -- you're out there for the first week of the season. How electric and exciting was that atmosphere?

Shortnacy: Oh my God, it was absolutely amazing. Especially coming off having COVID involved in stuff, and there were still a little bit of restrictions from last year, but this year, it's definitely like back to normal. The energy was insane -- I actually was telling clients the next day, I was like, "I couldn't even hear my teammates next to me when we were on the sidelines," because it was so loud. The fans were going nuts. it was probably the best home opener I have ever been to for Washington -- it was so much fun. The fact that I couldn't hear anyone was insane -- it was obviously very challenging, because we have to communicate, but it was so much fun because the fans were just so happy to be there, everyone was just happy in general to be there. So it was awesome.