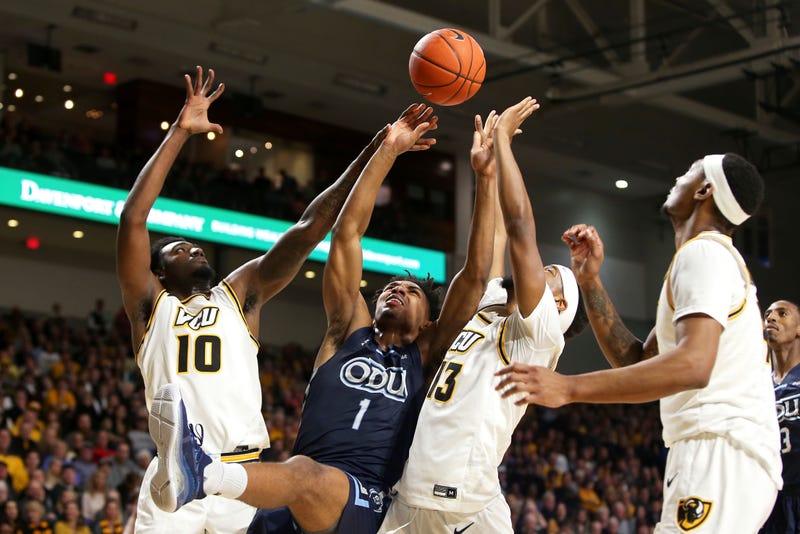 VCU and ODU men's basketball players battle for possession during a game between the Rams and Monarchs in 2019. Photo credit Getty Images

The VCU Peppas and director Ryan Kopacsi are back together again.

Kopacsi led the collegiate band from 1998-2016 and returns for the 2022-23 season, and visited the 910 the Fan studios in Richmond to talk about being back with the band after a few years away.

"It felt so good when it was finally finalized," Kopacsi said, "that tears came to my eyes. And then about a couple of weeks later tears came to my eyes for a different reason, because then I realized, 'I really have to produce.' I'm human, just like everybody else, and I can read what everybody writes -- 'What if he doesn't have it anymore?' 'What if he's too old?' [...] 'What if he doesn't have the charisma that he once had?'

"So doubt creeps into your mind, but you have to just move on and try to push through, and I think so far we're doing pretty well."

Kopacsi also revealed that there was interest from the Brooklyn Nets the day after he left the VCU job.

"They tried to get the VCU band up there for some playoff games," he said. And then they reached out -- long and short, we couldn't make it work because of the money and the travel and all that stuff. But I was honored. I was almost the band director at UConn, and then I was a finalist for a job that I had never thought in a million years that I would ever be even considered for, and that was the Stanford job. That didn't come to fruition either. So I beat myself up quite a bit and had some dark times, at least in my head, for my band directing stuff."

Additionally, Kopacsi hinted at potentially introducing a new fight song, since his iconic "War" has "run its course," according to him.

"Coach Rhodes is doing a great job, and maybe it's time to get his thing," the returning director said. "We're gonna still be in your face, and we're still gonna be pushing the limits and we still want to be brash, and I won't completely get away from 'War.' But I think what I'll do is have a different song [for the] pregame tip, and have the fans interact in a different way."

You can hear more of the interview at the link below.