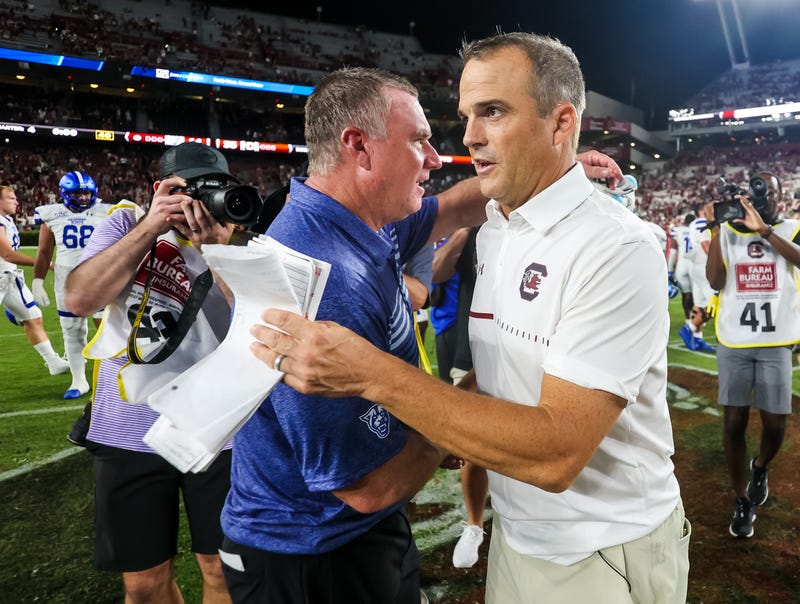 South Carolina got a season opening win 35-14 over Georgia State at Williams-Brice on Saturday night. Gamecock Coach Shane Beamer channeled his dad, in a game where "Beamer Ball" was on display. In Frank Beamer's tenure at Virginia Tech , the Hokies were known for their ability to excel on special teams. Of South Carolina's 35 total points, special teams accounted for most of the Gamecocks scoring, as they only scored on offense twice.

South Carolina struck 1st when MarShawn Lloyd scored on a 1 yard TD run. That capped an opening drive of 9 plays and 69 yards drive that took 4 minutes and 27 seconds off the clock. SC went for two and did not get it, which made it 6-0 Gamecocks after the opening drive. The Gamecocks then got a 53 yard Field Goal from Mitch Jeter to take a 9-0 lead.

The Panthers then got on the board with after a scoring drive of 6 plays and 75 yards. That drive was capped on one of the few productive passing plays they had on the night, when QB Darren Grainger found Robert Lewis for a 17 yard TD strike. That made it 9-7 South Carolina in the 2nd quarter. The Gamecocks would get another FG of 50+ yards from Mitch Jeter as the halftime clock expired, and the Gamecocks took a 12-7 lead into the halftime locker room.

The Panthers struck first in the 2nd half after Spencer Rattler threw the first of his two picks on the night. GA State capitalized on the turnover and scored on a TD run by QB Darren Grainger, they then took a 14-12 lead. South Carolina then answered with a 9 play 75 yard drive to re-take the lead. That drive was capped off with a 16 yard TD pass from Rattler to Lloyd. The Gamecocks would convert the 2 point try on run by Rattler, to lead 20-14.

The Gamecocks then took a 2 score lead when a blocked punt was returned 26 yards for a TD by DQ Smith. South Carolina then went for 2 again and got it on a Jaheim Bell run, that made it 28-14 Gamecocks with 5:12 left in the 3rd Quarter. They would get another blocked punt in the 4th and Ahmarean Brown would take it 10 yards to pay dirt. That made it 35-14 South Carolina after the PAT , and that would be the final score.

Rattler's debut for the Gamecocks was lackluster, as he went 23 of 37 for 227 yards, 1 TD and 2 picks. Most fans were probably expecting a little more and while Rattler's performance wasn't overly impressive, it was way better than Darren Grainger's game Saturday. The Georgia State signal caller was struggled completing just 7 of 29 passes for 111 yards, 1 TD and a pick. He was solid in the scramble game, running for 43 yards and a TD on 11 carries.

South Carolina's offense wasn't as impressive, as most people probably expected. Jaheim Bell and Marshawn Lloyd combined for 18 carries for 69 yards and a rushing TD , for the Gamecock ground game. Lloyd had two total TD's, one rushing and the other a TD catch. Jamyest Williams led GSU with 13 carries and 76 yards on the ground.

South Carolina's Special Teams performance was the difference in the game. They will need to find some answers on offense, specifically with running the ball more effectively. The competition ramps up for SC, as they travel to Fayetteville to take on 19th ranked Arkansas. The Razorbacks got a season opening win at home against #23 Cincinnati. Arkansas ran the ball for nearly 225 yards in that win, RB Raheim Sanders and QB K.J. Jefferson had nearly 180 of those. That game is set for a Noon (Eastern) kickoff Saturday in Fayetteville.