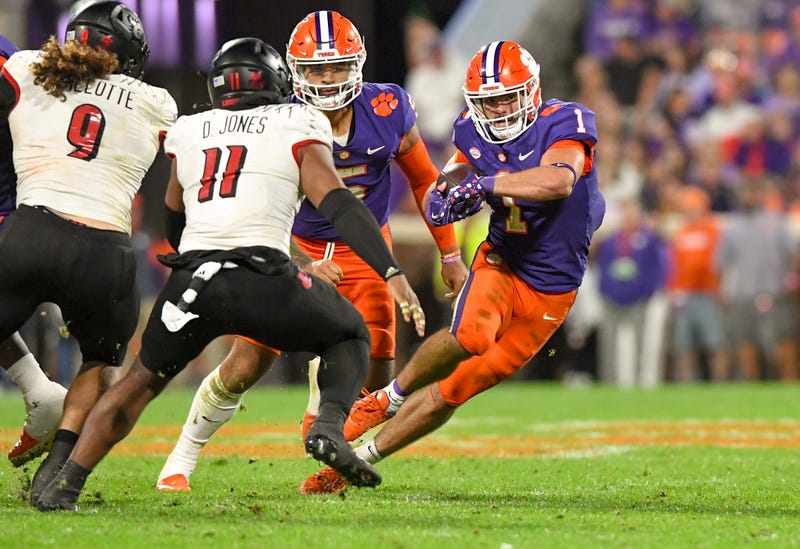 A balanced offensive attack and timely defensive plays led Clemson (9-1, 7-0 ACC) to a 31-16 win over Louisville (6-4, 3-4 ACC) on Military Appreciation Day on Saturday afternoon. The Tigers improved to 8-0 all-time against the Cardinals and clinched the ACC Atlantic Division outright with the victory.

Wide receiver Antonio Williams registered a career-high 106 all-purpose yards including 83 yards on a Clemson-freshman-record-tying 10 receptions and added a six-yard pass completion as well. Running backs Phil Mafah (10 carries, 106 yards and a touchdown) and Will Shipley (19 carries, 97 yards and a touchdown) led the Tigers to 248 rushing yards on the day.

Clemson opened the game with a 12-play, 75-yard scoring drive. A 24-yard pass to Joseph Ngata on third-and-15 started the Tigers’ momentum, and DJ Uiagalelei finished the drive by running for an 11-yard rushing touchdown, his career-high fifth of the season.

Clemson’s defense shut down Louisville’s ensuing drive and forced the Cardinals to go three-and-out in back-to-back drives. B.T. Potter added another three points for Clemson to make the score 10-0 with 2:25 left in the first quarter.

A Tiyon Evans touchdown run got the Cardinals on the scoreboard with 14:17 left in the first half, making the score 10-7. aBefore the end of the half, Uiagalelei led Clemson 80 yards in a drive that ate up 3:40 of game time. A four-yard touchdown pass to Antonio Williams put Clemson up 17-7 at the half.

On the Tigers’ first drive of the second half, Williams kept the drive alive with a key reception on third-and-4. Two plays later, Shipley broke into open field on a rush up the middle, hurdled a defender at the 10-yard line and found the end zone for a 25-yard touchdown, his 12th of the season and 23rd of his career.

A 54-yard reception from Tyler Hudson gave Louisville the ball inside the Clemson five-yard line, but Clemson’s defense responded with a goal-line stand. Louisville settled for a 22-yard field goal, making the score 24-10.

Mafah helped seal the victory with a 39-yard touchdown for Clemson late in the fourth quarter. Louisville scored another touchdown on the game’s final play to make the final score 31-16.

Next week, Clemson will host Miami (Fla.) on Saturday, Nov. 19 for a game that has been designated as Senior Day at Death Valley.