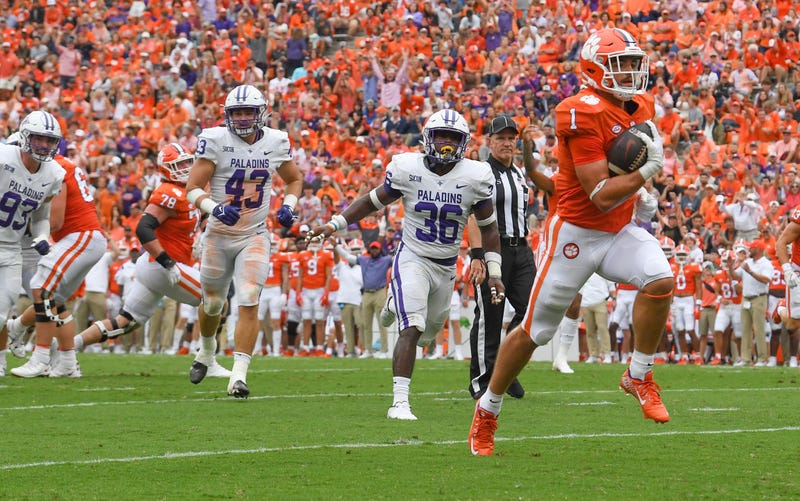 Furman fell at Clemson, as the Tigers scored touchdowns on five of its first six drives in a 35-12 win against Furman in the home opener at Memorial Stadium on Saturday. Furman ended up losing the game by less than what Clemson beat Georgia Tech by on Monday.

Clemson QB DJ Uiagalelei completed 21-for-27 passes for 231 yards and added 36 yards rushing. Clemson rushed for 147 yards on 28 carries, led by Will Shipley, who ran for two more scores for the second-straight game.

The victory was Clemson’s 19th straight in home openers. The win extended Clemson’s longest winning streak in home openers all-time. The Tigers also ran their home unbeaten streak to a nation-leading 35 in a row.

Clemson’s defense held Furman to 12 points, forced two turnovers and recorded two fourth-down stops. Clemson also turned it over twice in the game. Trenton Simpson and Keith Maguire led the Tigers with eight tackles each, while fellow linebacker LaVonta Bentley had seven stops, including 2.5 for loss.

Clemson started the game strong with a touchdown on its first three possessions. On the first drive, DJ Uiagalelei found Beaux Collins for a 40-yard pass over the middle, and three plays later, Uiagalelei found Joseph Ngata in the red zone to put Clemson on the one-yard line. Will Shipley finished the job and pushed his way in for a touchdown, capping a seven-play 75-yard drive.

Furman’s Axel Lepvreau kicked a 30-yard field goal on their first possession, but the Tigers had a quick response. The Tigers again marched 75 yards, this time on 11 plays, on a drive that took 5:23. Uiagalelei drifted right and threw a short two-yard pass to Jake Briningstool for a touchdown to cap the drive.

On Clemson’s next possession, Shipley rushed for his second touchdown of the game to give the Tigers a 21-3 advantage with 9:10 to play in the half. On Furman’s ensuing drive, Clemson’s Malcolm Greene stripped the ball from Ryan Miller and Fred Davis II recovered the fumble for the Tigers’ first takeaway of the game.

With about three minutes left in the first half, Furman quarterback Tyler Huff connected with Ryan Miller for a 25-yard touchdown pass to cut the Clemson lead to 21-9. Clemson responded as Uiagalelei led the Tigers 75 yards in just 1:27, finding the end zone again with 26 seconds left in the half as Kobe Pace finished the drive with a one-yard rushing touchdown. Clemson entered halftime leading 28-9.

Clemson opened the second half with a strong defensive stand and turnover when Barrett Carter came up with his first career interception.

Starting the drive at Clemson’s 48-yard line, Shipley took the Tigers’ all the way to Furman’s 11-yard line as he rushed for 41 yards over three carries. Two plays later, Beaux Collins caught a pass from Uiagalelei at the right edge of the end zone to give Clemson a 35-9 lead with 10:08 to play in the third.

Furman would add a field goal with 48 seconds to play in the third quarter, and a scoreless fourth quarter resulted in the 35-12 final score. Paladin standout TE Ryan Miller had a game 13 catches for 95 yards and a TD.

Clemson is back home in Death Valley next week, they host Louisiana Tech Saturday for an 8 PM kickoff. Furman has their conference opener, as they travel to Johnson City to take on last year's SoCon Champs East Tennessee State. That game is set for a 7:30 PM kick on Saturday. You can hear every Furman game on the Fan Upstate.